DAY IN THE LIFE: Students Sample Schmidgen of Scholarly Spice 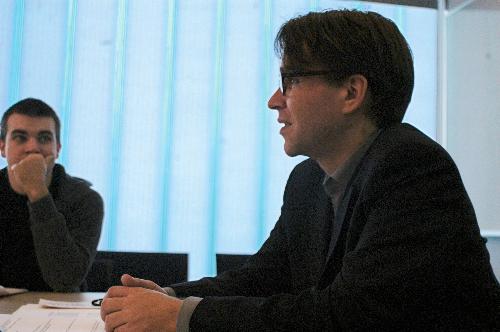 Students in History of Science 125: “Cultures of Experiment” learn about the intersection of science and culture just as they might in any other departmental class. But they also hear about Germany’s Halloween celebrations, beer festivals, and regional dynamics.

That is because the professor of this nine-person class is Henning Schmidgen, who is visiting Harvard for a year from the Max Planck Institute in Berlin, Germany.

“Professor Schmidgen is definitely one of the most unique professors I’ve ever had,” says Alfredo A. Ok ’06, one of three undergraduates in the class. “Since a lot of the history of science is based on European science, it makes it interesting to have someone who can provide a continental perspective on whatever we’re studying.”

Schmidgen’s research has explored the historical development of laboratory and experimental designs—and how this evolution relates to culture.

“If I was like a German actor, it would be like Hollywood called and asked me to do something here,” says Schmidgen, who himself comes from a prestigious institution in Germany. “Harvard’s History of Science Department is the best in the Western world.”

OTHER SIDE OF THE POND

Reflecting upon his experience so far, Schmidgen says, “The first striking difference is that it’s quite intense here.”

In Berlin’s educational institutions, according to Schmidgen, even seminars have at least 30 to 40 students. Harvard’s seminars have “a more profound focus on the individual interests of students,” he says.

And, in Berlin, professors occasionally try hard to deter students from taking their classes to prevent overcrowding, Schmidgen adds.

One method of deterring enrollment, he says he observed, is talking rapidly about things that students don’t understand.

Schmidgen also explains that while Harvard professors are expected to carefully plan for their courses, German professors often “walk in and basically improvise” in lecture classes.

LOST IN THE STACKS

Like teaching, research is conducted differently in Berlin—making for some cultural differences that Schmidgen says he enjoys.

At the Max Planck Institute, Schmidgen says, professors rarely research in libraries themselves, relying on library staff to obtain books and materials.

In his experience at the Bibliothèque Nationale de France two years ago, workers, with uniforms and gloves, went around to different stacks and brought books back to scholars’ desks.

“You never have to move,” Schmidgen says.

But professors at Harvard have access to the stacks at Widener, and Schmidgen says he “loves” it.

“This is just marvelous—standing side-by-side with the book you’re looking for,” Schmidgen says. “Being lost among the stacks—it’s quite romantic.”

He also says he noticed another small difference in academic culture between Europe and the U.S. Upon receiving the Crimson’s request for an interview, he went to departmental staff to ask permission to speak to the press, as is customary practice among professors in Berlin. He was told he did not need it.

His colleagues think that Schmidgen has fit in quite well with the History of Science department.

“It is a real pleasure to have [Schmidgen] in the Department as a colleague this year,” says Brandt.

He says that Schmidgen’s work has “centered attention” on the history of how scientific knowledge is produced—particularly experimentation, time, and technology in the physical and biological sciences.

Schmidgen’s students also say they appreciate the cultural nuances of attending a course taught by a foreign professor. They say their professor’s experience with labs and institutes in Berlin enhances the course, which includes an examination of the architectural designs of Berlin labs.

Schmidgen, Ok says, displays a firsthand familiarity with the way labs and institutes are organized in Berlin.

“What makes the class most fun is that he has all these anecdotes about Germany that he can share with us,” says Michael E. Coulter ’08.

Students add that the professor’s observations and questions also serve to make students more aware of their own habits and practices here.

When a course reading discussed the introduction of athletics into the university system after the Civil War, Coulter says, the students told Schmidgen about Harvard-Yale weekend and football rivalries.

“He wasn’t familiar with college football and the culture it has in America,” says Coulter, adding that a visiting professor like Schmidgen spotlights “all the little things we just sort of don’t notice.”

Schmidgen, who also teaches History of Science 220: “Time Relations,” says he expects to teach a sophomore tutorial and a lecture course next semester.