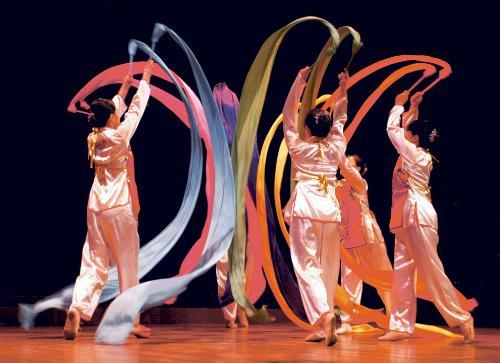 The ceremony, which anually showcases students’ diverse backgrounds and artistic talents, featured performances from nearly 30 student groups, a performance from Pinkett Smith’s band, and a food festival in the Science Center.

Pinkett Smith, who hosted the first show Saturday afternoon, was honored as the Harvard Foundation for Intercultural and Race Relation’s “Artist of the Year.” The Foundation has sponsored the show for its 20-year run.

The opening act by the Harvard Phillipine Forum, which incorporated hip hop into a traditional dance with long bamboo rods, set the tone of the show, according to Hakeem A. Rahim ’02, who said he has attended many past shows.

“This show is definitely innovative,” Rahim said. “The influence of hip hop really shows how much the global community is coming together.”

Later in the show, after Candela Salsa’s hip-twisting dance, Pinkett Smith showed off her own skills, explaining that “me and Will [Smith] like to salsa dance.”

Chosen as hostess for her accomplishments as a “distinguished actress, producer, singer, and humanitarian,” Pinkett Smith was given the award by Dr. S. Allen Counter, director of the Harvard Foundation, and William R. Fitzsimmons ’67, dean of admissions and financial aid at the College.

After being honored, Pinkett Smith gave a warm, teary thanks and shared life lessons with the audience.

“Don’t let anybody define who you are,” she said. “Don’t let them put you in a box. Don’t be afraid to break whatever ceiling anybody has put on you.”

She told the audience about her childhood with teenage parents both addicted to heroin, but triumphantly exclaimed, “I can stand here on this stage and say that I’ve proven them all wrong.”

She then addressed issues regarding the roles of men and women today.

“Women, you can have it all—a loving man, devoted husband, loving children, a fabulous career,” she said. “They say you gotta choose. Nah, nah, nah. We are a new generation of women. We got to set a new standard of rules around here. You can do whatever it is you want. All you have to do is want it.”

“To my men, open your mind, open your eyes to new ideas. Be open,” she added. In an interview after the show, Counter said Pinkett Smith was “the best we’ve had thus far.

“Usually, the celebrities give warm thanks, but she sat down and talked to us,” he said. “She was like a visiting professor, giving a perspective students don’t always get to hear around here.”

This year was special for the show, as it celebrated its 20th anniversary. During the show, Counter invited to the stage two of the three students who started Cultural Rhythms in 1986, Lisa M. Guerra Vargas ’87 and Rosa C. Rios ’87.

“I’m impressed by what I’ve heard—that it’s grown so much,” Guerra said at the reception before the show, “Back then, we had to go out into the community to find ethnic performing groups.”

Pinkett Smith’s “gift to Harvard,” her band Wicked Wisdom’s performance to begin the second show, was a new feature this year. It came just after students tasted such delicacies as moimoi, samosas, and scallion pancakes at the food festival in the Science Center.

Dina L. Maxwell ’06, co-director of Cultural Rhythms, said the show was a success.

“I couldn’t have imagined a better show,” she said. “The groups were great. Jada was wonderful—so sweet. The audience loved her.”