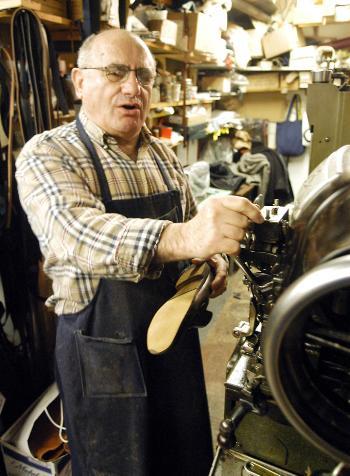 Some people who have been living here for years may never have noticed the little repair shop—identifiable only by a dirty yellow sign that reads “Felix’s Shoe Repair”—tucked away at the bottom of a large building on Linden Street.

The tiny shoe repair business owned by Christos Soillis has nonetheless been a constant—if inconspicuous—feature of Harvard Square for more than 40 years.

Soillis has worked in the shop since 1963—first as an assistant on nights and weekends to the original Felix, and then as owner and head cobbler.

Though he acknowledges that the business of shoe repair is a waning one, his love for and pride in his work eclipses any anxiety he may have.

The business of fixing shoes, he says, relies on the trust of the people with whom he works.

He says he is best-known among his small but loyal group of returning customers for the quality work that sets his business apart.

Soillis adopted this work ethic during his childhood in Greece. After finishing grammar school, he began to learn the craft of making and repairing shoes while working in a shop in Logganiko, a small village near Sparta. After three months there—his father paid the owner of the shop in olive oil in exchange for his son’s apprenticeship—Soillis left his childhood home.

He moved to the city of Leontary to further his education in the trade before opening two unsuccessful businesses, one in Sparta and one in the town of Skorchinou.

Two years later, he entered the army. Upon his return, he worked in Athens for several months.

His departure from Athens marked the conclusion of one era of his life and the beginning of the next.

In 1963, at the age of 26, he married 17-year-old Maria. The wedding, which had been arranged by both of their parents, took place in Sparta. Soon afterward, the young couple traveled to the United States.

“[I was] very poor, no shoes, no clothes—I left the old country with short pants with a thousand patches,” he says. His first—and lasting—impression of Harvard and the people that populate the Square was one of awe.

“I see young people dress up—I never had good clothes; I see young people with suits, with ties....[Felix] said, ‘Look [at] those [gates]....Any person who is rich, educated, he came from this [gate]. This area...controls the whole world....Anybody rich [came] from this door.” He remembers thinking, “‘How can I find a place around here?’”

Soillis stresses the level of connection he feels with the people who populate the Square.

“Harvard helped me a lot,” he says. “Of course I cannot help Harvard; they don’t need my help. I wish sometime before I die to do something for the Square, for the professionals, for the young people, because the University gave me a lot of help. If someone comes to this country and he doesn’t appreciate what this country can give to you, [he] is a person who is not worth a penny.”

Several customers come into the store and he greets each warmly. Most are older citizens bringing dress shoes and snow boots; a few are students. They inquire about his family, his business, his life in general. He is positive and staunchly buoyant.

It is these people, he says—his customers, the other tenants in the building, those he sees on his way to and from the shop—these are the people who have made his life what it is. When his wife was sick for almost three years before her recent death, they sent him notes of encouragement, left gifts on his doorstep, and helped him get though a period of time when his life was anything but easy.

Soillis emphasizes that he never ceases to be grateful for the life he has lived.

“I’m lucky. Love, support, trust—when you get that, you must keep it, and give respect, and try to give it back,” he says.

Soillis is overcome by emotion when reminiscing about the life he has led in the Square. He exudes passion for the career which has led him across continents and across languages—when, he says, little save his determination and conviction have sustained him.

“Anything you put on your mind to do, you can do in this country, as long as you’re honest and work to get the trust from the people,” he says. “You have to think, ‘I’m very lucky to have these people come to me.’”