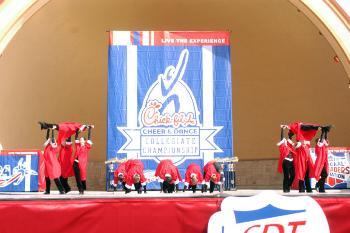 Harvard competes in Division I at the Cheer & Dance Collegiate Championships. Some of their competitors include larger schools with
By Kristi L. Jobson

Harvard competes in Division I at the Cheer & Dance Collegiate Championships. Some of their competitors include larger schools with dance majors and dance scholarships like Idaho State and the University of North Carolina.

Each team comes to Daytona with a theme, expressed through music and costumes as well as movement. Sacred Heart University (top) performed at Daytona with a Christian-themed routine, complete with choir robes and crucifix-esque lifts.

Stephen F. Austin University (right), the first team to knock Harvard out of their first place position at finals, had an Aviation-themed piece, with flight attendant costumes and songs like “I Believe I Can Fly.”

Like Kirsten Dunst’s experience in her 2000 flick “Bring It On,” teams often come to Daytona with similar themes and music. By FM’s completely unscientific count, at least two dozen teams used at least a clip from T. I.’s nauseatingly repetitive ditty “Bring ‘Em Out.”

Luckily, CDT’s music did not include any T.I. snippets whatsoever.