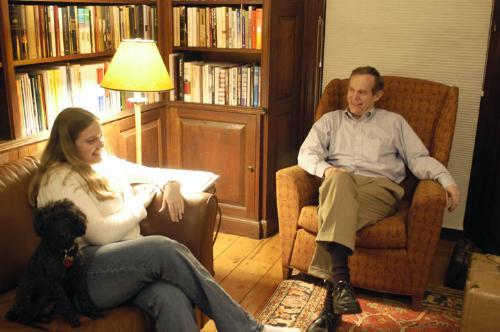 In sixth grade, most of us didn’t have to deal with the regret that inevitably follows taking one too many
By Jennifer P. Jordan

In sixth grade, most of us didn’t have to deal with the regret that inevitably follows taking one too many shots. We didn’t know about beer pong, or funnels, or Everclear, choosing instead to spend our time at awkward dances and single-sex sleepovers. But while we were crowding around the punch bowl in the school gym and playing video games in our basements, 15-year-old Rachel E. Porter was stuck watching drunken friends throw up all over themselves. She describes a particularly “traumatic” incident at the annual Dunster House goat roast, when a friend vomited right in front of her after drinking too much.

Rachel, a freshman in high school, is the youngest daughter of the Dunster House Masters, IBM Professor of Business and Government Robert B. Porter and Anne R. Porter. Unlike most of her peers, who are tucked safely away in private apartments or houses, Rachel lives in the midst of college students, and she’s seen her share of “people a little too out of control.” Despite the shock, Rachel still has her sights set on coming to Harvard.

Although she’s only a freshman, Rachel has already begun to worry about crafting a perfect Harvard application. With three older siblings who went here, parents who are house masters, a dad who’s a professor, and a bedroom right over the Dunster dining hall, it would be hard to avoid getting stressed out by the college admissions process. For her, the pressure started in first grade, when her sister applied. Living in Dunster doesn’t always make having stellar grades and extracurriculars easy, she says, since “being at Dunster is equivalent to three extracurriculars because of the number of events.”

“[There is] a lot of pressure on me to do well,” Rachel says. “People are always asking me ‘Will you go to Harvard?’”

In conversation, Rachel turns her anxiety about college into a recurring joke.

When talking about the difficulty of studying in the noisy house, she says, “That’s why Harvard should just not look at my grades. They should just say, ‘That’s OK. She’s in.’” And she jokingly asked that FM relay a message to the admissions office: “Maybe you could put at the bottom, ‘Since Rachel has done so much for Dunster House, we should just admit her before putting in any college application.’” But the experience of living in Dunster may be just the ticket Rachel needs. She’s spent a lot of time hanging out with older students, and as a result has developed a marked maturity. “I think the house has provided a lot of really wonderful opportunities for growth, for having fascinating conversations and interactions with the students,” says Rachel’s mother Anne.

Rachel herself agrees that witnessing Dunster residents at their worst will help her in college to “be mature enough to handle the things that college students. just can’t handle yet.” Whether running into drunk fans at a hockey game, watching students get sloshed at the Harvard-Yale tailgate, or seeing a friend dance on a tabletop and take her clothes off, Rachel has had, as she explains, “experiences that other kids might age might have never been able to go through.”

Still, seeing people covered in their own vomit at such a young age is bound to make an impression. After years of watching what too much alcohol can do, Rachel is convinced that she never wants to drink at all. “I have seen perfectly wonderful, mature people become wild animals,” she says.

But those “wild animal” behaviors haven’t stopped her from forming close friendships with students. Her parents have noticed that Dunster residents make extra efforts to include her, whether dancing with her at a tutor’s wedding in Portugal or cooking with her in the Porters’ kitchen. Professor Porter remembers her dancing a few Sundays ago at a 1950s-themed brunch in the dining hall with a student whom he described as a very good-looking guy.

“I think that’s the way you would look out for a sibling of yours,” Professor Porter says.

Indeed, Rachel’s friends offer only the highest praise. Dominique D. Nong ‘05 says Rachel is “outgoing and speaks her mind.” Mervin John ‘05 praises her “dry sense of humor,” and Magali A. Fassiotto ‘05 calls her “the awesomest.” All traits the Harvard Admissions Office should be looking for.

Being around so many students has not only helped Rachel develop what Fassiotto calls “a great social sense,” it has also pushed her academically. Rachel says that being around stressed-out students reminds her of all the schoolwork she has yet to do. She also notes how weird it is to run into students in the dining hall “who haven’t even gone to bed yet” when she’s just woken up for 6:50 class.

When emotionally charged political discussions erupt in the house, meanwhile, the staunch conservative stays up and argues right alongside her cohabitants. Swimming in a sea of liberals, Rachel has had plenty of chances to hone her debating chops. “Get me with some Democrat, and I’m right in there,” she says.

Other students have noticed the academic acumen. “One of my favorite things about Rachel,” says one-time UC hopeful Aaron S. Byrd ‘05, “is that she will help me with my schoolwork because she is smarter than I am.”

Sounds like Rachel Porter has no reason to worry about getting to spend another four years in this ivory tower-even if she does have to weather the brunt of her housemates’ messy Sunday mornings.