Faculty meeting is first since January without discussion of Summers’ leadership 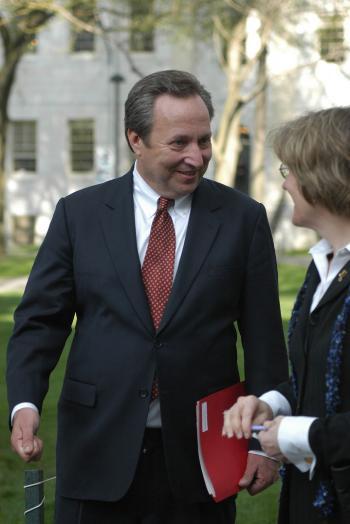 In its most civil and efficient meeting in months, the Faculty of Arts and Sciences (FAS) yesterday heard reports by two curricular review committees that largely reiterated recommendations first released in April 2004. For the first time since their January meeting, professors did not criticize University President Lawrence H. Summers’ leadership.

Some professors had raised concerns before the meeting about whether Summers lied to them last month when he denied that he had considered allowing other faculties besides FAS to award Ph.D. degrees. But after Dean of the Faculty William C. Kirby repeated at the outset of yesterday’s meeting that he had never participated in conversations about such a change, the issue was not discussed further.

“I think the assurance from Dean Kirby that he was not in favor of such a thing set a number of people’s minds at rest,” Dillon Professor of the Civilization of France and Professor of Comparative Literature Susan R. Suleiman said after the meeting. “I think people are really eager to get on with things rather than keep harping on the past.”

Yesterday’s meeting lacked the tension that has characterized past meetings—except for a few brief moments when Professor of Anthropology and of African and African American Studies J. Lorand Matory ’82 asked Summers how he planned to increase the number of non-white administrators and professors and whether Summers had any plans to attempt to lure former Fletcher University Professor Cornel R. West ’74 back to Harvard.

Summers declined to comment on “individual faculty matters,” but he restated his commitment to maintaining a racially diverse Faculty.

“My hope is, and my expectation is, that a number of aspects of the recommendations of the [two newly-formed] task forces [on women]...will point the ways toward progress in this area,” Summers said.

Saltonstall Professor of History Charles S. Maier ’60, reporting on the progress of the curricular review’s general education committee, repeated previous recommendations that the Core be abolished in favor of distributional requirements, though he also said that his committee has yet to reach a consensus on what the purpose of general education should be.

The gen ed committee has been dogged by criticism this year for its inability to come up with a strong guiding philosophy for the review. Though the committee completed a “draft final report” two months ago, the report was never released to the whole Faculty because it was poorly received by professors who had seen it in advance.

Maier said that his committee never intended the “draft final report” to be its final report, which will be released by this fall.

As an April 2004 report first recommended, departmental classes and broad interdisciplinary Harvard College Courses will lie at the center of the gen ed proposal, Maier said.

In response to Maier’s report, Buttenwieser University Professor Stanley Hoffman said that while Core areas like history and quantitative reasoning would still be studied under a distributional requirement, he is concerned that students will no longer study moral reasoning and foreign cultures, which do not fall under the purview of any particular department.

Both Maier and Kirby assured Hoffman that the review will leave opportunities for students to study both subject matters.

Professor of Economics David I. Laibson ’88, a member of the Educational Policy Committee (EPC), said his committee will recommend that students be allowed to study a related field, which “encourages interdisciplinary coursework,“ in addition to their concentration.

These related fields would be recorded on a student’s transcript and provide students with an alternative to the joint concentration, which requires students to write a thesis that integrates both fields of study.

EPC member and Chair of the Committee on Higher Degrees in the History of American Civilization James T. Kloppenberg also told the Faculty that the committee will recommend eliminating dual honors and non-honors tracks, moving the concentration choice deadline to the middle of sophomore year, and capping requirements for most concentrations at 12 courses.

All three of these recommendations were first announced in an April 2004 review report.

The Faculty also unanimously approved a motion by East Asian Languages and Civilizations Department Chair Philip A. Kuhn that “the Faculty undertake thorough, documented projection of how curricular changes will affect the financial support of graduate students,” which would be completed prior to voting on any portion of the curricular review.

Kuhn once again called for the Graduate School of Arts and Sciences (GSAS) to receive its own endowment, saying that financial strains on GSAS hurt graduate students by requiring them to serve as teaching fellows in order to fund their education.