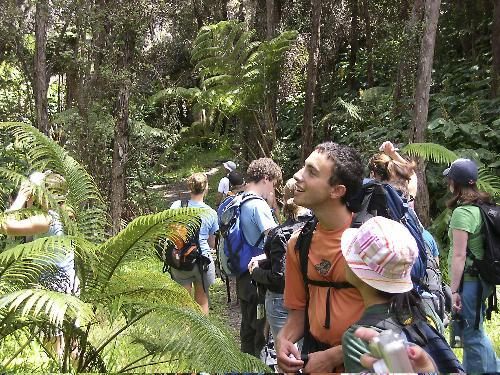 Jonathan I. Sasmor ’07 surveys the endemic Hawaiian tree ferns on the descent of the forested face of the Kilauea crater.
By Tina Wang, Crimson Staff Writer

As most students were moving back on campus and flipping through course catalogues last week, Earth and Planetary Sciences (EPS) concentrators were ascending ancient volcanos and sunbathing on black sand beaches on the coasts of Hawaii.

The EPS department sent 38 of its 44 undergraduates to the Big Island of Hawaii for a week, fully covering the cost of about $1,000 per student, according to department chair Jeremy Bloxham.

The EPS department offers a field trip to its students each fall, rotating among destinations to allow concentrators to visit three different sites by the time they graduate. In addition to visiting Hawaii, students also study how mountains are formed in the Canadian Rockies and observe weather patterns and take ocean samples from a sailboat in the Gulf of California.

Partly as a result of these concentration-wide trips, which come in addition to smaller course-related trips, the EPS department has raised its profile among undergraduates in recent years. In the last three years, the department has grown from 25 to 44 concentrators.

“I think [the trips] might have made people take a closer look at the EPS concentration,” said EPS head tutor John H. Shaw, who will likely lead the Canadian Rockies trip next year. “They were intended to do that.”

The week of field research in Hawaii gave concentrators a first-hand view of ancient natural formations and geological processes.

“Hawaii was a great place to take them because it showcased so many different aspects of the research being done in our department,” said Assistant Professor of Geochemistry Sujoy Mukhopadhyay, who led the trip.

The students heard talks every evening, had technical briefings by the U.S. Geological Survey at the Hawaii Volcano Observatory, and toured the famous Keck telescopes, which stand on the nearly 14,000-foot summit of Mauna Kea and are not open to the public. Students carried exercise workbooks during all their outings.

The group stayed at the Kilauea Military Camp, which provides low-cost housing for educational programs.

Robert M. Koenig ’06-’07 described seeing “the plume of steam from where the lava was still pouring into the ocean” on one outing. “It was beautiful,” he said.

Lecturer on Earth and Planetary Sciences Mark Van Baalen, who gave short lectures during the trip, said that a major aspect of the Hawaii trip “was helping students to appreciate the physical scale of things in nature.”

“You can’t convey that in a photograph or textbook,” he said. “You have to actually be there and walk across Mauna Ulu, which is 50 miles long.”

Faculty and students said that field trips like this are one of the perks of being in a small concentration. The department devoted a “significant portion” of its endowed funds that are restricted to financing field research, Bloxham said.

“We obviously have some resources to bring to bear,” said Shaw, who is Dudley professor of structural and economic geology. “If our concentration was four times this size, we would obviously have to offer this content and material in a different way or we would have to get more resources.”

“Our concentration has been growing in numbers, so at some point we will face the possibility of not being able to support every student who would like to go on the trip,” Bloxham said. “Obviously we’re torn...if we couldn’t send everybody we would lose a lot.”

In addition to offering an opportunity for field research, the trips also bring students and faculty from the department closer together, participants said.

“Frankly, we’ve also found that it’s acting as a very effective mechanism for students to get to know each other and faculty on a very informal basis,” Shaw said.

“One of the things that is a huge draw is that it’s a tiny department. You actually get to form a scientific community. You don’t get that with other departments like Ec or Gov,” said Ann E. Kurrasch ’07, who went on the trip.

EPS faculty and concentrators said they doubted that students selecting a concentration would develop a newfound interest in geological formations simply so they could get a free trip to Hawaii.

“I think we trust the students, so we’re not worried about one or two who might try to gain from the system,” said Van Baalen. “Many students who had never really considered concentrating or a career in earth sciences are really turned on to the experience by field trips. These can be life-changing experiences.”

“Senior faculty across the country have become earth scientists because of a field trip experience,” he added.