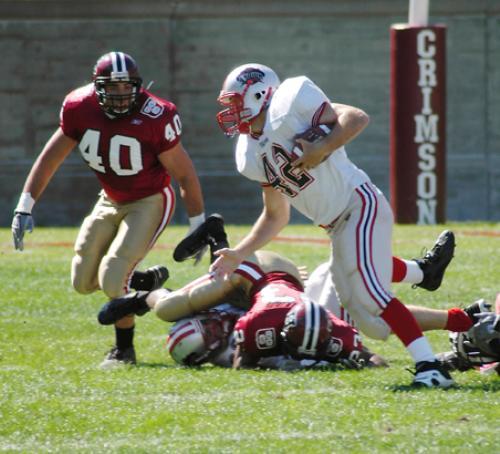 Harvard senior linebacker Matt Thomas swoops in to stop Brown running back Nick Hartigan. The All-American tailback finished with 115 yards on 29 carries, but was kept out of the endzone and under five yards a carry.
By Timothy J. Mcginn, Crimson Staff Writer

Mazza was injured on the second play of Harvard’s game-tying drive as he attempted to block one of Brown’s defensive backs at the first-down marker. As running back Clifton Dawson neared the spot, he, Mazza, and a number of Bears defenders were tossed into the same heap, with Mazza somewhere near the bottom. As the pile thinned, Mazza was slow to get up, the damage already apparent.

“I believe that I, in stretching for every extra yard, I think I rolled up on his ankle,” Dawson said.

Mazza, who had hauled in six catches for 97 yards and one score prior to leaving the game, was limited to crutches immediately following the game. He has an MRI scheduled for today, but no timetable is set for his return.

“We’ll know better after a few days when the swelling goes down,” Mazza said yesterday.

Regardless, the injury could not have come at a worse time for Harvard’s young offense. Senior Rodney Byrnes is already sidelined with a sprained hamstring and has been slow to recover from injury in the past, and just one member of the Crimson who is likely to dress next weekend—senior Ryan Tyler—has caught more than 20 balls in a season.

Turns out that 10-catch, 253-yard performance a season ago was no fluke.

“The Schreck kid is amazing,” Murphy said. “I don’t know if any single player has played better against us since I’ve been in the league, and I’m talking long term, not just one game. He’s an amazing kid.”

Schreck and his quarterback, Joe DiGiacomo, were the primary beneficiaries of Harvard’s stop-the-run-first defensive strategy, which packed eight and even nine defenders into the box while leaving the Bears’ wide receivers in single coverage. More often than not, the Crimson’s cornerbacks simply weren’t up to the task, allowing the speedy Schreck to gain separation before bringing in first-down catches, highlighted by a perfectly executed 42-yard touchdown strike down the right sideline.

“They,” Schreck said, “play coverages that are favorable to my type of play.”

Harvard’s coverages weren’t nearly so favorable to Brown tailback Nick Hartigan, who was limited to 115 yards on 29 carries and no touchdowns. And even those numbers were inflated by two rushes of 18 and 26 yards that obscure precisely how ineffective he was, down-to-down, particularly in the first half, when he managed just 29 yards on 13 carries.

“We’ve got an All-American back in our backfield, and for him to carry it 29 times for 115 yards is—we’re looking for better than that,” said Brown coach Phil Estes, who labeled Hartigan’s performance “average.”

Harvard coach Tim Murphy reached the 100-win plateau with the Crimson’s victory on Saturday. Sixty-eight of those wins have come in Cambridge. The other 32 were tallied during stints with Cincinnati and Maine...Harvard running back Clifton Dawson fumbled for only the third time in his career early in the second quarter. Senior Ryan Tyler recovered for the Crimson, and Dawson scored three plays later...Senior punter Mike King, sidelined a week ago by injury, replaced ineffective backup Clem McDavid in the second quarter. McDavid had punted twice for a combined 50 yards before King entered the game. He punted four times for an average of 37.5 yards, with a long of 43...Harvard was penalized 13 times for 101 yards, the second straight week the Crimson has gone over the century mark in yards off penalties. Brown drew just five yellow flags for 37 yards.