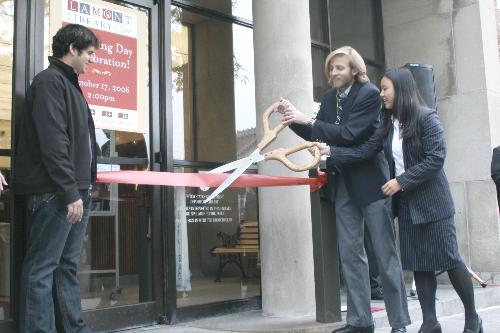 All-Nighters All the Easier

All late-night Lamont Library dwellers have reason to rejoice: with the opening of the Lamont Library Café, it is now possible to avoid setting foot outside of the library from Sunday morning until Friday evening.

So you were Quadded? Why not move into Lamont? In addition to plenty of comfortable chairs for sleeping, Lamont now boasts a source of sustenance on the ground floor. From 3 p.m. until late at night, the Café will serve light fare—“beverages, teas, water, juices, and some prepackaged food” like sandwiches and yogurt, according to director of communications for the Harvard College Library Beth S. Brainard. And if you’re still hitting the books into the wee hours of the morning, the Café area features vending machines and a self-serve espresso machine—which all take Crimson Cash—around the clock.

Ray L. Palmer ’07 says he “practically lives in Lamont”—now he can actually, not just practically, move in. And even for Lamont lightweights like Sarah T. Selim ’07, who says she’s never “pulled a crazy three-day stint in Lamont,” the opening of the Café still holds the promise of “a spot for rejuvenation in the long day.” Now those three-day stints might be a possibility.

As Nelson T. Greaves ’10 points out, it will no longer be “necessary to walk to [Au Bon Pain] at 12:30 in the morning.” But Greaves and all his fellow Lamontsters now face a serious question: With the opening of the Café, are there compelling reasons to leave Lamont at all?