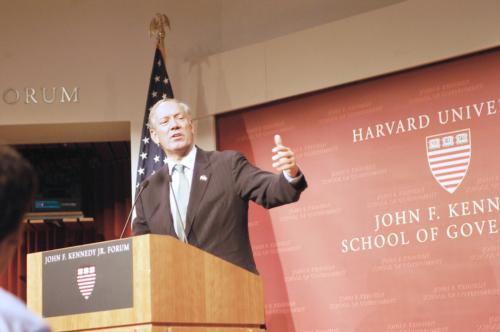 “I’m not running for anything—yet,” Pataki insisted, when one audience member prefaced a question with the phrase, “if you were elected.”

Pataki announced in July 2005 that he would not seek a fourth term as governor. His political action committee, 21st Century Freedom, has opened offices in New Hampshire and Iowa, crucial states at the start of the primary season.

The committee’s stated goal is to “support those who advance the ideals of freedom,” but many believe it’s also intended to test the waters for a possible presidential run.

The committee raised $1,785,852 in the 2006 election cycle, according to the Center for Responsive Politics, a non-partisan research group, and donated over $500,000 to Republican congressional candidates.

Sporting a green tie last night, Pataki spoke about his efforts at political compromise in New York, his experience in the wake of Sept. 11, 2001, and the lessons to be drawn from the recent midterm elections. A moderate Republican, Pataki attributed the G.O.P.’s loss of the House and Senate last week to his party’s failure to appeal to the center.

Following the lecture, held at the Institute of Politics (IOP), Pataki fielded questions from the mostly suited-and-tied audience. Queries ranged from friendly softballs about public-private partnerships, to more probing inquiries about the future direction of the Republican Party.

Asked directly about the possibility of a presidential run, Pataki said, “I’ll make a decision further down the road. I still have seven weeks as governor.”

His speech was the “Albert H. Gordon Lecture on Finance and Public Policy,” an annual event at the IOP.

“One of the things that we take pride in is finding the rising leaders of America,” said Bill H. White, director of the IOP Forum, before the event. “While Pataki has not announced his candidacy, he is frequently mentioned as a potential Republican candidate. This will be a high-profile event. There will be a lot of buzz.”

The talk was a featured item yesterday on ABC News’ “The Note,” an influential political newsletter.

Caleb L. Weatherl ’10, who serves on the executive board of the Harvard Republican Club, said Pataki’s centrism could hurt him on a national stage. “It might be tough for him to get the nomination because he is not as conservative as some other candidates would be on some social issues,” said Weatherl.

Pataki has run the Empire State since 1995, making him the nation’s longest-serving governor. Before rising to his current seat, he served 10 years in the New York State Legislature.

The audience briefly glimpsed a more aggressive Pataki when the governor, who graduated from Yale in 1967, addressed the upcoming Harvard-Yale football game.

“Yale is going to crush Harvard,” he said. A spokeswoman for the governor, Joanna Rose, said Pataki plans to attend The Game this weekend.

At least one audience member was not particularly taken by the soon-to-be-former governor.

“This guy is so boring,” said audience member Erol Pekoz, an associate professor at Boston University.