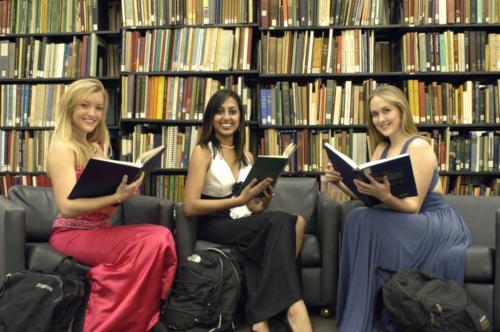 People don’t join FM for its beauty cache, so we wanted to compensate. FM sat down with three Harvard beauty
By Merav D. Silverman

People don’t join FM for its beauty cache, so we wanted to compensate. FM sat down with three Harvard beauty queens to pick their brains about JonBenet, being hot at Harvard, and Tom Cruise in his underwear.

FM: How do people at Harvard react when they find out that you have done pageants?

AEB: I think people are really afraid of juxtaposing beauty and academic talent and intelligence, so I do think it’s a shock to some people.

FM: What’s the freakiest pageant theme you have ever participated in?

SBS: Oh my God. Well let’s see. I think I had to do superheroes and it was kind of strange, but it wasn’t that bad. I have heard much worse stories from my fellow contestants.

WGH: We did Junior Miss Rock when I was in my outgoing pageant. And there is a dance that we do in the beginning. What’s that movie with Tom Cruise when he is dancing in his underwear with a microphone? Oh, it was “Risky Business.” My chairman thought that it would be hilarious if I did a “Risky Business” thing for the beginning, so she had me wearing white boxer type shorts and a big man’s shirt and crew socks and big sunglasses, and I was holding a hairbrush like a microphone….You are kind of at your chairman’s mercy.

FM: Did the JonBenet case hit close to home? Some people claim it was her objectification, on the part of her parents, that caused her murder. How do you respond to this claim?

WGH: The Jonbenet case, I have never taken it that seriously. I have always thought of it as something that you read in line as you are waiting in the grocery store, and it has never hit close to home. Not that I don’t care about little girls getting murdered….It’s just not personal for me just because I have done pageants.

FM: At what age did you get into this and how did your parents react to your involvement?

WGH: I actually watched “Miss Congeniality” and that movie “Beautiful” with Minnie Driver. I became really obsessed with beauty pageants so I signed up for a bogus beauty pageant. It was a spin-off, like not legit, because you have to pay to get into it. And my mom drove me, but it was supposed to be a statewide thing but there was not a preliminary for it, so you just showed up and were competing for the state title, which is really sketchy, but I didn’t know any better….They had a 12-year-old girl who was wearing a leotard with a ballroom gown on top. And she started singing “If You Wish Upon a Star.” And 30 seconds into it she ripped off the skirt and was wearing just the leotard and doing this sexy dance and it was so weird because she was only 12.