A Harvard Man In The Mayor’s Seat 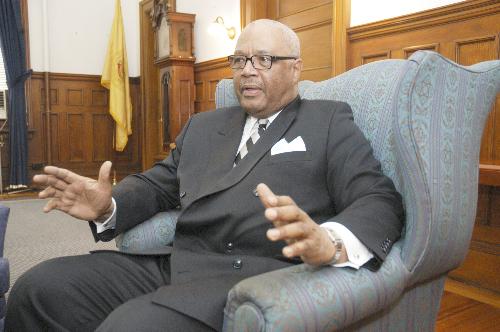 Kenneth E. Reeves ’72, a Hist and Lit concentrator from Mather House, became mayor of Cambridge in 1992. He was named last month to return to the post.
By Anna M. Friedman, Crimson Staff Writer

In 1972, at least one Harvard graduate did not depart the brick buildings of Harvard Yard with his sights set solely on the star-studded hills of Hollywood, the glistening skyscrapers of Wall Street, or the marble powerhouses of Washington, D.C.

Kenneth E. Reeves ’72, a History and Literature concentrator from Mather House, decided to devote his career instead to the city of his alma mater. Last month, his fellow city councillors appointed him mayor of Cambridge.

A city councillor since 1989, Reeves previously served as mayor of Cambridge between 1992 and 1995. He was the nation’s first mayor to be both African American and openly gay.

Cambridge’s Plan E form of government makes the mayor a largely symbolic figure. The City’s nine councillors elect a mayor from amongst themselves every two years. A hired city manager, meanwhile, executes most of the daily operations of city government.

Nonetheless, friends, colleagues, and local political experts say that Reeves can, and will, make the most of his emblematic post.

“He gets the biggest kick out of being the mayor,” says friend and former councillor Edward Cyr. “And that’s an enormous asset, because the mayor in Cambridge doesn’t have that much authority.”

At Harvard, Reeves was a founder of the Kuumba Singers and also sang in the Glee Club. In 1972, when students protested the University’s investments in the Gulf Oil Company, Reeves joined them in taking over Mass. Hall.

“I was told there wasn’t anything to study about my history,” he says.

The College also played a role in Reeves’ personal development. In 1969, he met his future roommate and current partner, Gregory A. Johnson ’72, in the Eliot House dining hall. They met because Reeves was assigned to eat in Eliot House while construction on his own house, Mather, was being completed.

Reeves spent a year on a fellowship in Africa and attended the University of Michigan Law School and eventually returned to Cambridge with Johnson.

Reeves, a Detroit native, says that going to law school made him miss his college city.

“There’s no comparison between Ann Arbor and Cambridge,” he says.

After working as a lawyer for several years, Reeves mounted his first City Council campaign in 1985. He lost—but ultimately won a seat four years later.

A VISION OF CAMBRIDGE

Reeves says he would like to see more students follow in his footsteps and fall in love with their adopted hometown.

“It’s still too possible to be at Harvard and not feel Cambridge,” he says.

He says that, as mayor, he hopes to increase the City’s access to University resources and foster a closer relationship between Harvard and the Cambridge schools.

Today, Reeves—who, in his capacity as mayor, also chairs the Cambridge school committee—says he wants to make the Cambridge schools a top priority. He describes the system as “an embarrassment of riches,” noting that the City spends over $20,000 per pupil only to see results lag behind those of systems that spend less than half that amount.

“We still have a group of...working-class kids that we don’t do well enough by,” Reeves says.

The mayor adds he hopes to close this “achievement gap” and raise standards across the school system. He also says he plans to synchronize curricula, introduce more music and arts programs, and set an expectation of “excellence” rather than settling for proficiency.

Reeves also enthusiastically points to plans to revamp both Central and Harvard Squares. He says he is investigating one proposal to redesign Central Square so that it resembles a European piazza, complete with a grassy area and a fountain.

But when it comes to dealing with space, Reeves is critical of his alma mater, despite his assertion that “in some ways, the relationship [between Harvard and Cambridge] has never been better.”

Reeves insists that the University should pay taxes. Under state law, Harvard is tax-exempt because it is categorized as a non-profit institution.

“There will never be a good reason for the citizens of Cambridge to subsidize Harvard. We’ve got people here who can’t afford to live in their working-class houses because Harvard and MIT have attracted people here and housing costs are astronomical,” he says. “Harvard is not a not-for-profit institution.”

A BITTER TASTE FROM THE PAST

Allegations of improper profit-taking tainted Reeves’ first two terms. Political drama played out in 1994 when the Cambridge Chronicle accused Reeves of misusing a City credit card for personal expenses and the Massachusetts Department of Revenue investigated Reeves’ purportedly missing state income tax returns. The Federal Bureau of Investigation also questioned Reeves on why he had received extra salary payments of roughly $30,000 from the school committee over three years.

Reeves denies any intentional wrongdoing, suggesting that he was singled out because of racism or homophobia.

“No improper spending was ever documented,” he insists. “There’s never been a mayor like me in Massachusetts. I have and will again face peculiar scrutinies that I can’t explain unless I look to some sort of -isms.”

Ultimately, Reeves paid back the money he owed, according to longtime local political observer Robert Winters.

“A lot of it was sloppiness and being a bit cavalier,” he says. “Ken’s a little too carefree and it tends to come back and haunt him, and that’s a shame because he’s a good guy to have in there.”

Cyr, who has been close to Reeves since they were both elected for the first time in 1989, also says that Reeves can neglect detail at times.

“He likes to live well and is sloppy with bookkeeping,” Cyr said. “Ken would have assumed that someone would have done that for him...he’s kind of out of touch. But I don’t think he ever does anything malevolent.”

Winters says that signs of Reeves’ propensity to miss important details have already surfaced this term.

Winters also dismisses that racism or homophobia propelled the accusations against Reeves from his previous term. He says that Reeves made several political enemies after his split with the Cambridge Civic Alliance, a progressive political organization that no longer exists.

“He’s got a big sign on his back that says ‘kick me, please’...he’s a good man who unfortunately invites controversy,” Winters says.

“Reeves made himself a very prominent public figure and they went after him...but I’m not sure he was victimized any more than anyone else would have been,” he says.

Indeed, Sheila T. Russell, who served as mayor from 1996 through 1997, notes that she herself was questioned for expenses when furnishing her office in City Hall.

Despite the controversy, Reeves’ colleagues say that he is such an iconic presence in Cambridge politics that his past is not a political liability.

“It never became an issue in the campaign [for City Council],” Cyr says.

Winters says that Reeves’ strong personality will define his tenure.

“Ken is bigger than life. He can’t help himself,” he says.

He says that this status will help shape Reeves’ current term.

“He is very much capable of raising an agenda to a higher level of public awareness....He is not shy about raising issues that people sometimes don’t want to talk about,” Koocher says.

“I expect that during Mayor Reeves’ tenure, some really good things will come about in the field of arts and celebration and basically making Cambridge a more fun place,” Winters says.