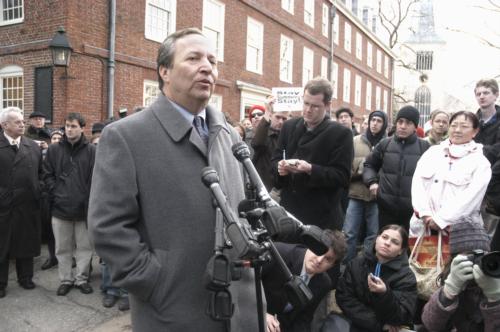 After a prolonged silence on the matter, the Harvard Corporation finally defended Lawrence H. Summers’ handling of the fraud case surrounding economist Andrei Shleifer ’82, a close friend and protegé of the University president.

But the defense came too late to salvage Summers’ presidency.

In a letter dated Tuesday, overshadowed by the announcement of Summers’ resignation that same day, the Corporation’s senior fellow, James R. Houghton ’58, addressed fresh allegations that Summers had shielded Shleifer from disciplinary action at Harvard. Several professors raised concerns about the case at the explosive Feb. 7 Faculty meeting that precipitated Summers’ downfall.

“President Summers was not present for nor did he participate in any of the Corporation’s many discussions about the HIID matter, including those resulting in the decision to settle the case,” Houghton wrote, referring to the Harvard Institute for International Development.

But Houghton’s letter did not directly address a charge leveled in Institutional Investor magazine last month by journalist David McClintick ’62, who wrote that Summers “made a point of taking aside Jeremy Knowles, then the dean of the faculty of arts and sciences, and asking him to protect Shleifer.”

In a deposition at his Elmwood residence in March 2002, Summers acknowledged that, around the time he became president the previous year, “I expressed to Dean Knowles at some point that I was concerned to make sure that Professor Shleifer remained at Harvard, because I felt that he made a great contribution to the economics department.”

In 2004, a federal judge found Shleifer and an associate, Jonathan Hay, liable for conspiring to defraud the U.S. government. The pair made investments in Russia, which were prohibited by their contracts, while part of an HIID program that was advising Moscow on privatizing its economy.

The University was also implicated in the lawsuit and settled last August for $26.5 million. Shleifer, who is the Jones professor of economics, agreed to pay $2 million. Neither party acknowledged any liability in their settlements.

But the “tawdry Shleifer affair,” as one professor dubbed it at the most recent Faculty meeting, resurfaced in the 18,000-word Institutional Investor exposé.

Asked about the matter at the Faculty meeting by Professor Frederick H. Abernathy, Summers responded that he was “not knowledgeable of the facts and circumstances to express an opinion,” eliciting murmurs of skepticism from the audience.

Abernathy, the McKay professor of mechanical engineering, said at the meeting that he had penned a letter to Houghton expressing concern about the matter. Houghton’s letter, addressed to Abernathy and made public by the University, was a reply to the professor’s query.

In a brief interview last night, Summers reiterated that he had recused himself from the case “within a few days since I took office.”

Before becoming president, Summers said, “I didn’t have any formal role or any authority. There was nothing to recuse myself from.”

Coming the same month that Summers angered many professors by forcing William C. Kirby’s resignation as dean of the Faculty, the Institutional Investor article added still more fuel to the Faculty’s uproar.

“Bill’s resignation was the most important thing behind it,” said Coolidge Professor of History David Blackbourn, referring to Summers’ ouster. But, he added, “Larry’s answer to the question about Andrei Shleifer also really antagonized people.”

“Given President Summers’ recusal, it would not be appropriate for him to pass judgment on the matter,” Houghton wrote.

But coming the same day that Summers announced his resignation—a decision that, he said, was reached last week—Houghton’s letter was too late to head off the mounting Faculty revolt against Summers.

Abernathy, the professor to whom Houghton’s letter was addressed, declined to comment last night. He did release his initial letter to Houghton, dated Jan. 24, which concluded, “The story, if true, is damning to Harvard.”

The recent outcry over the Shleifer matter underscored divisions in the Faculty. While many professors have brandished harsh words to describe the University’s handling of the case, Harvard economists have been virtually unanimous in defending their colleague.

Glimp Professor of Economics Edward L. Glaeser said last week that the Institutional Investor article “is a potent piece of hate creation—not quite ‘The Protocols of the Elders of Zion,’ but it’s in that camp.”