BASEBALL '06: The Apotheosis of Captain Morgan 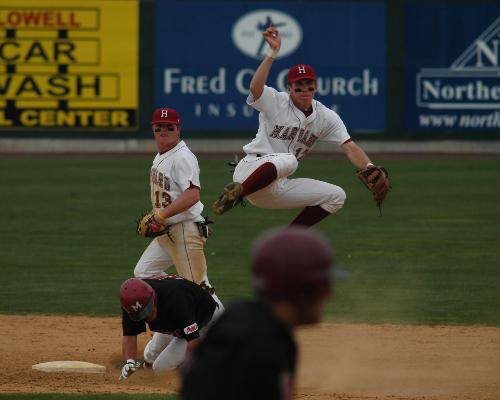 Caption Morgan Brown was voted to the All-Ivy second team in 2005, largely on the strength of his slick fielding at shortstop. It was his glove that earned him the attention of the Cape Cod League last summer.
By Alex Mcphillips, Crimson Staff Writer

On the Cold River in southwest New Hampshire lies a wooded town of slow streams and defunct mills, a relic of distant New England days.

It’s called Alstead, population 1,944. On one late summer day in 2005, Robert Brown, a former Dartmouth football star, was hard at work building a new barn on his family’s rural property.

His son, Morgan, the Harvard baseball player, busied himself hammering nails. Hopped up on iron supplements—to get the blood count up, of course—Morgan, Alstead’s favorite son, was vulnerable, restless, and down.

He had been an endurance guy: a high school champion on the local cross-country scene, in sneakers and on skis. A Junior Olympian. An All-American.

“I really believe that if Morgan wasn’t here playing baseball,” says Joe Walsh, his Harvard coach, “he’d be in Torino.”

It was an awkward twist, this, his new fitness agenda, driving nails. As fate would have it for the surehanded All-Ivy shortstop, so was the accident that led him there.

“You think a ball hits you in the nose, that’s enough pain right there,” Walsh says. “But you never think that you’re going to be on the emergency table at two in the morning, almost bleeding to death.”

“And that’s what happened.”

The Crimson shortstop had been recruited by a fellow Harvard man, Wareham Gatemen President and GM John Wylde ’60-’63, to play in the celebrated Cape Cod League in early June, fulfilling Brown’s lifelong dream of making a Cape roster.

When the conclusion of the College World Series and the arrival of new talent threatened to consign Brown to bench duty—“We were hoping to find ways to possibly keep him,” says Wylde, who had become a Brown booster after watching Harvard games in the spring—the shortstop transferred to the North Adams SteepleCats of the wood-bat New England Collegiate Baseball League (NECBL).

As an upcoming senior without serious pro aspirations, it might have been his last summer playing baseball; in the NECBL, at least, he likely would spend the majority of his time on the field.

It was the bottom of the first inning of a game in Manchester, Conn. when Andy Parrino, a shortstop for the Silkworms, attempted to steal second. The throw from catcher Kris Watts to Brown, who covered, took a wild skip off the playing surface.

It one-hopped directly into Brown’s face—“Smoked me,” he says. He crumpled to the dirt.

“So I tried to be a tough guy,” Brown says. “You know, you get up. I knew I was in trouble when I looked down at the ground and the first thing I saw when I got up was the guy running out with a shovel.”

“I was bleeding so much, they had to start shoveling it off.”

His nose shattered and gushing, Brown was rushed to the emergency room in Manchester. He could barely breathe. He had multiple mid-facial fractures. He couldn’t see out of his left eye.

After treatment in Manchester, Brown returned to North Adams, where he would presumably begin his recovery.

Two days later, in a bandage, he continued his off-field work with kids in the local YMCA.

The next moment, according to Brown, “something happened.”

“I just started...I could feel the blood start rushing down my face,” he says. “And I was working with little kids, so I tried to get out of there as fast as possible.”

In the next 24 hours, Brown made, he thinks, three separate visits to the emergency room. After having his wound cleaned and cauterized, he would begin to return home, only to turn around when the bleeding started again.

On July 5, Brown underwent surgery in Pittsfield, Mass. to clean up the wound. Walsh received a phone call at 6:30 a.m. It was Morgan’s mother, Juliana.

“Morgan survived the operation last night,” she said. “He’s going to be okay.”

“I had no idea,” Walsh says now. “I’m making phone calls thinking, ‘There must’ve been a car accident.’”

Meanwhile, the doctors in Pittsfield misunderstood the severity of the injury. Relying on x-rays to review the bone breaks, they couldn’t explain why the bleeding would not stop.

A specialist was brought in to examine the injury. The diagnosis: an artery behind Brown’s left eye had ruptured.

It took an emergency blood transfusion and another surgery, this time a reconstruction of Brown’s eye socket and nose in Keene, N.H.—“they did an incredible job as far as keeping the scarring down,” says Brown—before he could begin the road to recovery.

On July 30, the night of the Cape Cod League All-Star game, Morgan Brown was miserable. He watched the televised festivities from his home in Alstead.

Some of his former Cape League teammates played in the game. Lance Salsgiver, his Harvard classmate, batted second and started in center field for the West.

The next day Brown received a phone call. A month had passed since the accident in Manchester.

“We’re having problems with defense right now,” said the voice on the other end of the line. It belonged to Wylde, calling from Wareham.

“We just need you down here. Can you come down tomorrow?”

“He nearly jumped out of the telephone,” Wylde says.

The story of baseball’s Captain Morgan Brown doesn’t begin in quiet Alstead, N.H., on a late summer day. It doesn’t build up to an extraordinary afternoon in Manchester, Conn.

If anything, Morgan Brown’s place on the Harvard baseball squad at all—forget, for the moment, his rapid ascent to Baseball America’s 2006 All-Ivy First Team—is the tale that begs to be told.

In late 2001, Brown was a senior at Fall Mountain Regional High School, where The Boston Globe had already once named him “Skier of the Year” (he was honored again, in 2002).

Dartmouth, a noted hotbed for collegiate skiers, and a school whose baseball team had for years been Harvard’s arch-nemesis in the Red Rolfe Division, was Morgan’s dream college.

It helped that his father, an alumnus, had made his own indelible athletic mark for the Big Green, setting track records and starring on one of the nation’s best football teams along the way.

“He was always my role model growing up,” Brown says of his father. “So I was like, ‘I’m from New Hampshire. I’m going to Dartmouth.’ That was my whole goal.”

As Brown shined at shortstop during his senior season, he became “more circumspect.”

He boasted a sterling academic record, and had once won the New Hampshire State Geography Bee. He was his school’s Student Congress President.

“I started getting more interested in Harvard, as I read more about it—academically,” he says. “At this point, I was wondering whether baseball was going to work out.”

When Dartmouth saw Brown play a game in Hanover, he hit a home run.

“He left before the game was even over,” Brown says.

“We questioned his bat,” Walsh says. “Morgan was applying to schools and we were keeping in touch. And there was just something about him, you know, that we were able to keep in contact.”

“Coach said I was a ‘tier-two player,’” Brown says. “You know, sort of like, maybe play some JV, play some Division III baseball or something like that.”

In Harvard’s Early Action group, Brown gained admission to the Class of 2006, based entirely upon his student record. Dartmouth admitted him in the spring, but Big Green coach Bob Whalen made no promises about baseball.

Brown arrived in Cambridge in the fall.

“The first week I was here...I was so scared to go down and play baseball,” Brown says. “Because I used to see the guys eating in Annenberg. The recruited baseball players. I was really skinny as a freshman, and they were a lot bigger than me.”

“And I was just like, man, I was too scared to even go down and play,” Brown says.

Eventually, Brown tried out­—and caught the eye of Walsh. He had never had a power bat, but his slick glove at short impressed the coaches, despite a surplus of young middle infielders on the roster.

“You know,” Walsh says, “the interesting thing was every day you’d be coming in to the office after the fall practice and you’d be going...‘Hey, that Morgan kid, he’s alright. Yeah!’”

Morgan Brown sits in Leverett Dining Hall on a recent cold afternoon. His face bears no outward evidence of the stress of last summer.

He is happy. In October, his Crimson teammates gave him a vote of confidence, electing him captain.

There’s plenty to say about Brown, who hit .298 in 2005 in his first full season last year (he fought his way into the lineup after shoulder surgery in 2004).

Just recently, he was awarded a Rockefeller Fellowship to research religion in Northern India for a year. He has planned trips to Dharamsala and Benares.

The batch of letters that he recently received from the Yankees, the Reds, and the Phillies poses an intriguing, if trying, dilemma.

Not bad for a one-time Ivy League tryout.

“You know, he’s just one of those guys,” Walsh says. “He’s not a lazy kid. He goes after everything. Wakes up in the morning, he’s got his day planned. He just goes hard, 24/7.”

A major leaguer famously once said that he’d “walk through hell in a gasoline suit to play baseball.” Captain Morgan Brown, it seems, is the rare individual to have done practically everything but that.

How ironic it would be, on the doorstep of bigger dreams, to take an unexpected detour. It wouldn’t be the first time.

­—Staff writer Alex McPhillips can be reached at rmcphill@fas.harvard.edu.