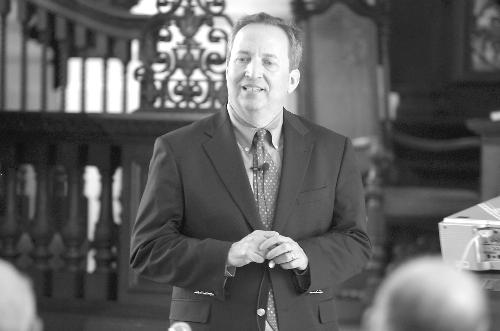 In a letter dated February 24, 2006, Harvard Hillel president and director Dr. Bernard Steinberg thanked outgoing University President Lawrence H. Summers for his “unapologetic identification with the Jewish people.” Summers was Harvard’s first Jewish president, and Steinberg wrote that Summers stood firm in his support of the community. But following Summers’ ouster, whether or not Harvard’s next president will be so resolute is less certain.

Summers’ identification with the Jewish community was a product of little gestures—maintaining a relationship with Hillel, for instance, and lighting a menorah with Chabad. Summers attended Shabbat 1000, which drew 600 people to Annenberg Hall on February 10 for a mass celebration of beginning the sabbath.

“IN EFFECT, IF NOT IN INTENT”

In September 2002, Summers answered a growing chorus of voices who had for months demanded that Harvard divest from companies doing business in the West Bank.

“Some here at Harvard and some at universities across the country have called for the University to single out Israel among all nations as the lone country where it is inappropriate for any part of the University’s endowment to be invested,” Summers said at morning prayers in Appleton Chapel. “I hasten to say the University has categorically rejected this suggestion.”

His suggestion that divestment from Israel would be “anti-Semitic in effect, if not in intent” made waves scarcely a year into his presidency. His opponents claimed that Summers’ veiled accusation stifled dissent, but for supporters, it was a vote of confidence.

“I think it was a stunning example of a leader taking a brilliant position in a way that I have not seen done before or since,” Zarchi says. “It was a historical speech that will go down in history as a unique moment when a public leader spoke with brilliant clarity and challenged the world to reflect about an unfortunate trend and I think he handled it brilliantly, not as a rabbi, not as a Jew, but as someone in the Harvard community. It is a moment where I think Harvard earned its reputation as a leader. So hats off to him for that.”

Three and a half years after his “in effect, if not in intent” remarks, Summers has resigned. Some—most notably Peretz Professor of Yiddish Ruth R. Wisse—have suggested that Summers’ unapologetic faith and his fall from power might be connected.

In an interview with The Crimson last week, Wisse stated that she did think anti-Semitism figured in the opposition to Summers.

“Of course, the divestment petition was anti-Semitic,” says Wisse. “Is it one of the factors at play? Yes. Is it the factor at play? No.”

Wisse’s comments are blunt, but critics allege that other supporters are being ambiguous.

“Along with [Frankfurter Professor of Law] Alan Dershowitz, [Glimp Professor of Economics Edward L.] Glaeser now becomes the second Harvard professor strongly suggesting that Summers’ critics are anti-Semitic,” blogger Richard Bradley writes. “Neither man has come out and said so explicitly, but they’re inching up to it...If Dershowitz and Glaeser believe [this], then they have an obligation to make their case explicitly, with all the seriousness it merits. Otherwise, they should stop hinting.”

On February 27, Boston Globe columnist Alex Beam pondered the role of anti-Semitism in Summers’ resignation in a piece titled “Summers, Harvard, and Israel.” He asked if “support for or opposition to Israel [was] the new fault line dividing the Harvard faculty.”

Alan Dershowitz took exception to Bradley’s characterization of him.

“I do not believe it was anti-Semitic and indeed a lot of the strongest opponents of Summers are Jewish,” Dershowitz said last week. “I want to categorically deny any link between anti-Semitism and the ouster of Summers.”

“Anti-Semitism is a matter of intention,” Dershowitz says. “I don’t like that formulation—‘anti-Semitic in effect if not in intent’—I would not make that argument at all. I would say that his ouster had to with hard-left opposition, some of it anti--American, some of it anti-patriotic, some of it having to do with the military. In other words, I think it was political, not religious. [There] is a very sharp distinction.”

Summers’ opponents agree. Assistant Professor of Near Eastern Languages and Civilizations Avi Matalon, who called Summers’ 2002 divestment remarks “outrageous and false,” says he believes “racial hatred of the Jews” was not a factor in the controversy.

Summers has denied having experienced racial or religious prejudice during his time here. “I certainly have not experienced personal anti-Semitism during my time at Harvard,” Summers told The Crimson last week.

WHAT ABOUT THE FUTURE?

Asked if future presidents will be hesitant to identify strongly with a faith for fear of being targeted by the faculty, Matalon says, “Not necessarily. They just might be more mature about it.”

But some active in Jewish life at Harvard said they would prefer a president who is no weaker in his faith, regardless of what it is.

“We hope that in a future president there will be a willingness to express his or her religion whatever it is,” Hillel student president Judy Z. Herbstman ’07 says. “I hope this doesn’t force the next [leader] to be overly cautious.”

“Many in the Jewish community have achieved high levels of leadership positions, and I’m afraid they will bend over backwards to appear to be neutral,” says Zarchi. “President Summers [showed] such courage in addressing the divestment issue without being insecure of speaking out publicly as someone who happens to be Jewish. I’m afraid [Jewish leaders] will look at the consequences of defending Israel and the Jewish community and think, ‘I’ll have to pay for this’ and in turn won’t be as courageous leaders in the future. I really hope that won’t be a consequence.”

“It’s not a question of anti-Semitism,” Steinberg says. “It’s a question of how seriously someone can be who they are [without having] to affect a neutral universalist identity, which is characteristic of ‘Old Harvard.’ Larry Summers stood for big universal issues and public service, but he did it as a Jew and I think that’s remarkable.”