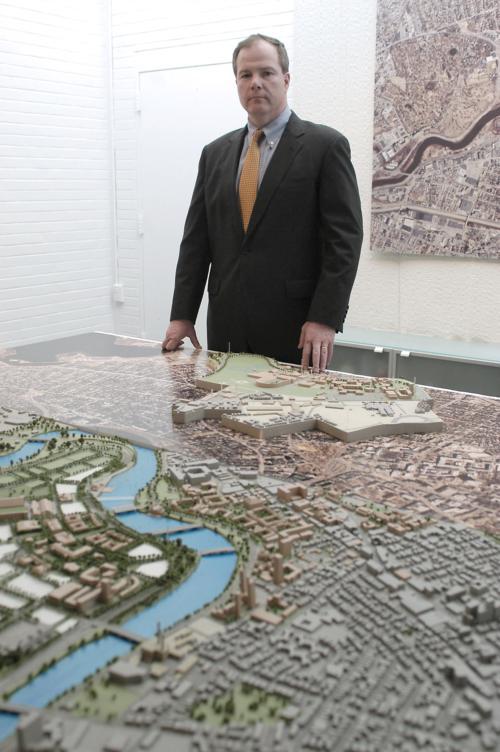 First, it was blocks. Then, it was runways and terminals at Boston’s Logan Airport.

Now, he’s been charged with the task of bringing Harvard’s dream campus into being.

Gordon, 43, who reports directly to University President Lawrence H. Summers, was hired last September to head up the Allston Development Group, a new body in the administration that will push the designs of the new campus off paper and into the ground.

After years of planning, the University took its first concrete steps into Allston this semester when it announced the location of the first structure to be built in the new campus—a massive 500,000 square-foot science complex that will house the Harvard Stem Cell Institute.

University officials said on Monday they hope to ask Boston by the end of April for permission to build.

Internally, the University is also set to release faculty reports outlining its science and arts goals for the new campus by the end of the semester.

Neither an architect nor an urban designer, Gordon specializes in project management—satisfying the demands of contractors, architects, and in Harvard’s case, faculty and residents.

“I envision my group as a service organization,” explains Gordon of the Allston Development Group, which now includes 20 staff members. “We’re not the wisdom or the decision-makers behind Allston. Our job is to be the facilitators.”

Gordon says he faces the challenge of setting a pace for planning that allows all voices to be heard without getting bogged down in discussions.

“He brings a lot of momentum to the office,” says Kathy Spiegelman, Harvard’s Chief Allston Planner, of her boss.

At his previous post at the Massachusetts Port Authority, Gordon overcame challenges to the $4.4 billion renovation of Logan Airport posed by lawsuits filed by neighbors and contractors.

Gordon says that like his group at Harvard, his team at Massport focused on finances, not community relations, but acknowledges that his experience negotiating with local residents and city officials will be useful at Harvard.

“[Harvard] clearly wanted to make sure I was confident dealing with the community,” Gordon says.

Before it can develop more of its Allston property, the University will have to receive approval from Boston for an institutional master plan, laying out its long-term intentions for the land.

“[Logan redevelopment] was specifically dealing with the city of Boston and this is Boston again so he knows the ropes,” says Geltner.

In 2002, contractors filed a lawsuit against Massport, alleging that Massport was responsible for costly delays in the ‘Little Dig,’ the redevelopment of roadways around the airport. Residents had also opposed the addition of a new runway at the airport since the 1970s.

But Gordon downplayed the obstacles he faced.

“We had our challenging projects, but generally we completed our work in good shape,” he says.

Gordon added that the Logan project helped mold his approach in dealing with residents.

“You’ve gotta be honest with them,” Gordon says. “When people are too cute, too flashy, they see through it immediately.”

Fred Moavenzadeh, a professor of systems engineering and civil and environmental engineering at M.I.T., characterizes Gordon as a “people person.”

“People do not get suspicious of him or frightened of him or get doubtful of his sincerity,” he says.

Since Harvard has had a contentious history with Cambridge, avoiding a similar relationship with Boston is crucial.

Spiegelman, who has worked with local residents in Allston to incorporate their ideas into the University’s plans, says she thinks Gordon is sincere about listening to residents.

“I feel very supported, and that he understands completely how important it is to have the stakeholders in Allston as much a part of the process as the stakeholders within the University,” she says.

Gordon, who was raised on the grounds of Maine’s Fryeburg Academy, where his parents were dorm masters and where he currently serves on the Board of Trustees, says he is comfortable returning to an academic setting full-time.

Gordon developed his expertise in project management as a graduate student at M.I.T., where he wrote a thesis examining the applicability of different kinds of contracts to different situations. It was so impressive that the University hired him as an adjunct professor, and his course became one of the most popular in the department, according to Moavenzadeh, who met Gordon 20 years ago while advising his thesis there.

Gordon’s position at M.I.T. has carried him as far as Malaysia, Argentina, and Afghanistan, which he visited for a week in the summer of 2003 at the invitation of the new government to discuss strategies for rebuilding its infrastructure.

But Gordon says the problems there—which even included religious extremists burning down new schools for girls—were beyond the scope of project management.

“That’s beyond engineering,” he says. “I’m supposed to be advising on how to stay on budget.”

That’s what he hopes to do at Harvard.

—Staff writer Natalie I. Sherman can be reached at nsherman@fas.harvard.edu.