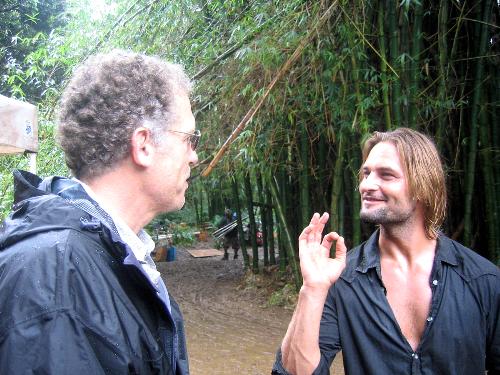 A. Carlton Cuse ’81 wishes he were as cool as the smooth-talking, straight-shooting character Sawyer on the ABC hit TV show “Lost.”

Then again, he did help create the character.

As the co-executive producer of the popular show, Cuse is one of a handful of people who know the well-kept secrets behind the mysterious island on which the show is set. The former Harvard varsity rower has been involved with the show since its very early stages and has won several awards for his work.

But Cuse’s huge success with “Lost” is just one stage in an illustrious career in entertainment that has led to the creation of several other popular television shows and that was born while he was still an undergraduate living in Eliot House.

‘YOU CAN GET PAID TO DO THIS?’

Cuse arrived at Harvard from the Putney School in Vermont as a pre-med, but he soon realized his calling was elsewhere.

“I had gone to this boarding school where biology consisted of being able to tell the difference between a Black Birch and a Staghorn Sumac,” he says. “And I found myself in introductory chemistry with 150 wonks from around the country who had already taken the class.”

Cuse realized medicine was not for him when, his uncle—a surgeon at the time—invited Cuse to accompany him to an operation.

“I did, and I promptly fainted,” he says. “My chemistry grade and my experience with my uncle were signposts that this was not the right career for me.”

So Cuse switched his concentration to American History and was planning on attending law school until a Paramount Pictures executive showed up in Cambridge with the writers and directors of the 1980 comedy “Airplane!” for a screening in the Science Center. Cuse helped out with the screening, and he was hooked.

“These guys showed up on campus, and the movie was really funny, and they were great guys,” he says. “And I realized: You can get paid to do this?”

Looking for a way into the field, Cuse asked the Paramount executive for advice on entering the film business.

“He said, sort of facetiously, ‘make a movie,’” Cuse recalls. “I didn’t really realize that it was facetious.”

Cuse nevertheless took the advice to heart and, with a classmate, set out to produce his first film, a documentary about crew.

After receiving a grant for his project from the Office of the Arts, Cuse did not let anything get in his way. At one point, he recalls, the coach of the crew team refused to give him the names of the team members.

“So I went into the boathouse late at night and copied all the names of all the rowers off the photographs,” Cuse said. “And then I went to Widener and looked them up in the directory.”

By the time Cuse had finished the project, he had secured a major financial backer, convinced actor and writer George H. Plimpton ’48 to narrate it, and had sold it to the network TBS, which soon aired it.

“That was my calling card,” he says. “I came out to LA and got hired as the assistant to a guy at one of the studios who basically wanted a Harvard guy buying his coffee and buying papayas and getting the windows cleaned on his car and buying organic dog food for his dog.

“It was the antithesis of the sense of entitlement that had been pitched very fervently at Harvard,” he adds. “I was shed very quickly of that on my very first job.”

Caroline C. Cunningham ’81, a close friend of the Cuse family, says that Cuse put in his time before being able to achieve his success.

“The story about Carlton that I think is very interesting is that he worked for and deserves his success in the most fundamental way,” she says.

‘A LABOR OF LOVE’

Cuse had already created several successful TV shows, including “The Adventures of Brisco County, Jr.” and “Nash Bridges,” when he was hired as an executive producer of “Lost” in October of 2004.

“When I got involved in the project, it was just something that was really a labor of love,” he says. “It was one of those things that I thought it was likely that it was going to be just 12 episodes and out.”

Cuse says that the success of “Lost,” both in ratings and in critical approbation—he won an Emmy in 2005 for best drama series and a Golden Globe in 2006 for the same category—has been “utterly shocking.”

The show, a drama about a group of plane-crash survivors who end up on a seemingly deserted island has just finished its second season. It has garnered a devoted following of millions of fans, who have created blogs, message boards, and websites discussing its references to religion and philosophy.

The challenge is striking a balance between creating mystery and not frustrating viewers, says Cuse, who recently returned to his home in California from a three-week writers’ mini-camp in Hawaii, the location of the show’s set, where he mapped out the show’s third season with other writers and producers.

Friends say that even as an undergraduate at Harvard, Cuse was infectiously energetic and ambitious.

“He was always exuding a kind of positive energy,” recalls Howard B. Johnson ’81, a fellow AD Club member who roomed with Cuse their junior and senior years. “He’s just a very gifted and optimistic and friendly person.”

On the second day of freshman week, Cuse met Christiane Hart ’81, who was walking up to her room in Grays Hall two floors above his.

“It was love at first sight,” Cuse says of Christiane, whom he married four years after graduation.

According to Christiane, they began dating freshman year up until the end of that summer. The two rekindled their relationship after graduation.

Christiane recalls how she and Cuse once decided on a whim in the spring of their junior year to jump off the Weeks Footbridge together.

“We were just walking and talking, and we just kind of dared each other—we just did it,” she laughingly says.

But the jump would put a halt to Cuse’s rowing career: He dislocated his shoulder when he hit the surface of the water.

“We ran to [University Health Services], and they thought we were drunk,” Christiane says. “They asked us how much we had been drinking, but we weren’t drinking at all.”

Caroline Cunningham has remained good friends with the couple, who now have three children. She says that Cuse’s talents were already evident in college.

“He’s very smart, very focused,” she says. “The enormous success that he’s had in Hollywood is no surprise to anyone who knew him in college.”

‘A METAPHOR ABOUT FAITH’

Cuse says that one of the things that attracted him to “Lost” was that it dealt with issues and worked on a level that most TV shows try to avoid.

“The debates about faith versus reason that go on in the show have been great in that it’s incredibly rewarding to see that we can write television that deals with issues that are substantive,” he says. “We decided not to write down to the audience, like many shows do. Hopefully our show works on several different levels.”

For instance, the show’s plot features a button, which some characters believe they must press once every 108 minutes. “The button for us was a metaphor about faith,” Cuse says.

“Would you undertake a mission that was of greater importance without any empirical evidence that the missions had value? That’s what faith is all about,” he says. “Hopefully the audience appreciates the moral and philosophical issues that the characters themselves are struggling with. The show is ultimately really about redemption, and maybe more fundamentally, how does one lead a life.”

These are issues that can be traced back to classes he took as an undergraduate, Cuse says. He took a seminar with the Pulitzer Prize-winning author and former Agee professor of social ethics Robert Coles ’50, whom Cuse says became a mentor and a big influence.

One of the authors who Coles assigned for his class was Walker Percy, whose writing influenced Cuse. As an homage to Percy, Cuse had “Lost” character Sawyer read Percy’s “Lancelot” while sitting on the beach in one episode.

Cuse says that while he does know how the show will end, he does not know when that end will come. The show will continue to go on as long it continues to make money, he says.

“We don’t know if it will be five years or nine.”

JOCK OF ALL TRADES

Christiane Cuse says that at Harvard, Cuse didn’t really fit into any one specific category.

“He was a jock, but he wasn’t a jock. He was in Eliot House, but not that preppy. He was more like an all-around person,” she says.

And during his college days, she adds, Cuse already liked to write. Johnson recalled that the two of them, along with a third friend, submitted a show to the Hasty Pudding at one point.

“It was a Pudding riff on Romeo and Juliet,” he says.

But what about Cuse’s wish to be as cool as his character Sawyer?

“Sawyer is very cool,” Christiane admits. “Is he cooler than Carlton?”

—Staff writer Reed B. Rayman can be reached at rrayman@fas.harvard.edu.