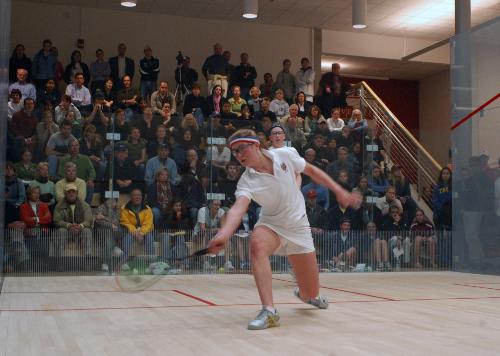 Despite being just a freshman, Ivy League Rookie and Player of the Year Lily Lorentzen went 10-1 at No. 1 for the Crimson and won the individual national championship, defeating teammate Kyla Grigg in the final.
By Lisa Kennelly

The term “rookie” doesn’t quite fit with what Lily Lorentzen did this year.

The double honor of All-American and Ivy League Player of the Year? Nah.

The individual national championship and the season-ending No. 1 ranking that goes along with it? Definitely not.

In fact, about the only thing that tips you off that Lorentzen is a freshman is the ’09 on the Harvard squash team roster—that and the Ivy League Rookie of the Year award she garnered in addition to the player of the year nod.

Lorentzen’s success at the college level isn’t really a surprise, because while she was new to Harvard, she was hardly new to competitive squash. Accepted into the class of 2008, Lorentzen opted to take a year off to play internationally. A four-time under-19 U.S. Junior National Champion, Lorentzen spent her year off playing in several Junior Opens and training abroad.

In July of 2005, she reached the quarterfinals of the World Junior Squash Championships individual tournament and was a member of the fourth-place U.S. team.

She also competed in the qualifying rounds of the Harvard-hosted U.S. Open in the fall.

Squash chops Lorentzen had to spare. And her play in the No. 1 spot for the Crimson, coach Satinder Bajwa said, had a trickle-down effect.

“I think the main thing with someone like Lily on the team,” Bajwa said at the beginning of the season, “is that the rest of the team is really energized and very confident in their top player, which takes the pressure off them.”

Lorentzen capped her season with a brisk run through the national individual tournament, facing little opposition until she reached teammate Kyla Grigg in an all-Harvard final.

“It was really exciting—maybe even more exciting—to have a teammate in the final,” Lorentzen said.

The match went to five games, with Lorentzen coming out on top.

“If I had to lose to anyone, I’d like it to be Lily,” Grigg joked after the match.

But the match where Lorentzen really proved her mettle had come almost two weeks before, when the Crimson traveled to New Haven for a showdown of Ivy unbeatens with top-ranked Yale. The Bulldogs boasted two consecutive Ivy and national titles as well as the top-ranked player in the nation, two-time individual champion Michelle Quibell.

After almost three hours of play and eight matches completed, the Crimson and Bulldogs were knotted 4-4, and only Lorentzen and Quibell’s match remained.

Teammates gathered around to watch the deciding fifth game. Quibell leapt out to a quick 4-0 lead as the Yale crowd roared. Lorentzen rallied for a 7-5 advantage but Quibell tied it up again at 7.

But youth would be served. Lorentzen won back the serve and the two points she needed to help hand Harvard its first Ivy title in three years and silence the rabid Bulldog hordes.

“You hear the crowd, it’s obviously there, but you just have to shut it out,” said Lorentzen, who is currently the sixth-ranked player in the nation. “I was just trying to take each shot one at a time, be consistent, keep control of the rallies, and make her do the running.”