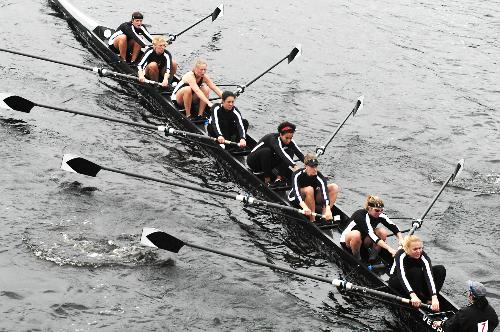 There’s More to Harvard Sports Than ‘The Game’

In just a few weeks, you and more than 1,600 of your newest friends will enter the heart of American
By Alex Mcphillips

In just a few weeks, you and more than 1,600 of your newest friends will enter the heart of American academia.

But did you know that you would also be crossing into the nerve center of American sports?

As you’re situated just a $1.25 T ride away from Fenway Park and TD Banknorth Garden, you’ll have access to three of America’s proudest professional franchises: the Red Sox, the Celtics, and the Bruins.

But such an indulgence requires time, lots of money, and in the case of scoring Sox playoff tickets, more than a little luck.

Our suggestion: satisfy your sports fix within the Ivy walls.

We’ll see you at the pre-game tailgate on Nov. 18, when Yale comes to Harvard Stadium. Here are seven other events you shouldn’t miss before Commencement '07:

Why make your debut fan appearance at a non-conference women’s soccer match? Are you Crimson Crazy?

When Harvard welcomes Penn State, a 23-1-1 power in 2005 that lost to eventual champion Portland on penalty kicks in the NCAA semi-finals, you’ll know right away that Harvardians play ball with the big dogs.

First-year Harvard head coach Erica Walsh will bring her experience with the U-17 national team to a squad that includes 11 freshmen.

Since taking over in 1994, head coach Tim Murphy has presided over a golden age of Harvard football, with three outright Ivy titles and two undefeated seasons. But this year, the Crimson sports more questions than answers.

How will the offense respond to 6'5 junior quarterback Chris Pizzotti, a rookie who was forced into the starter's role after the five-game suspension of regular quarterback Liam O’Hagan (and what, for that matter, prompted the dismissal, whose reasons coaches have protected like the Manhattan Project)?

How far will star senior running back Clifton Dawson fall behind an offensive line that returns only one starter? Or will he leave no record unbroken (he needs 1,087 yards to best Ed Marinaro's 35-year-old career league rushing mark) and then take his game to the NFL?

Meanwhile, the Crimson continues to deal with fallout from the Matt Thomas Affair. The erstwhile captain, long one of the league's fiercest linebackers, has been suspended from the team and faces assault charges stemming from an incident in June involving his ex-girlfriend.

At worst, Harvard’s non-conference tilt against the Crusaders will be a welcome reprieve after its recent off-the-field distractions. At best? Ask the media, which has favored Harvard to continue its run of dominance and win the Ivy League.

HEAD OF THE CHARLES REGATTAOct. 21-22

No sport is kinder to Harvard than rowing, and no event is heavier in spectacle than the Head of the Charles.

The Head of the Charles Regatta is one of the largest athletic events in the world.

If you aren’t there to cheer one of Harvard’s many championship entries, at least make sure to experience the river-area brouhaha. Hint: there may be live music and free samples of men’s cologne in your future.

Despite concerns from Boston lifers that it has become too corporate, the Beanpot Championship remains a salt-of-the-earth New England institution.

Four Boston area hockey teams square off in the city’s largest arena in front of the nation’s most cultish college hockey fans. The winner takes home a legendary trophy and cross-town bragging rights for a year.

Harvard’s storied tradition and contemporary national success has failed to extend to success in recent Beanpots. The Crimson has won three ECAC Conference titles since the last time it made the Beanpot’s second round, which was 1998.

Once again, the Harvard basketball team will try to put its tortured history to rest against Penn and Princeton in this annual February weekend.

The Ivy League remains the only Division I conference without a championship tournament format, and that won’t change any time soon. That’s bad news for the Crimson and the other five Ivy programs not named the Quakers or the Tigers; the killer P’s of Princeton and Penn have won an astounding 45 of the last 51 Ivy basketball titles.

In 2005–2006, Harvard started with an 11-5 record and sprinted to four wins in its first five Ivy games. But after squandering a six-point lead in the final minute against Princeton on Feb. 10–a game the Tigers won on a Noah Savage buzzer beater–the Crimson went into a tailspin, losing its next six games and surrendering its title hopes.

Think of it this way: you’ve watched countless hours of swordplay before. The only real difference between the 'Pirates of the Caribbean 2' and this critical championship weekend is that the latter will seem one heck of a lot shorter.

2005–2006 was a historic year for the Harvard fencing team, which won its first NCAA title?the fourth in the history of the university’s athletic program?and boasted both men’s and women’s individual national champions.

In four years, head coach Peter Brand has turned a program that was once an Ivy League doormat into what is looking like a national powerhouse.

Gold medalists Emily Cross and Benjamin Ungar will be back for more next season: they’re only juniors.

If the Crimson fences well enough in Philadelphia on Feb. 10 against the Ivies’ South entries to defend its league championship two weeks later at home–and it will–fans can expect an event that is blissfully heavy in drama and light in Orlando Bloom.

BASEBALL VS. DARTMOUTHO’Donnell Field, May 5

The Harvard baseball team, perennial title contenders in the Ivy League’s Red Rolfe division (the league's other division is named for Columbia legend Lou Gehrig), will revisit an annual rite of passage in early May.

Each year, Harvard and Dartmouth go toe-to-toe in a four-game, home-and-home series. The winner is all but assured of competing for the Ivy championship the following weekend; for ten years straight, Dartmouth or Harvard has won the Rolfe title.

Beware of the Big Green: each year the Ivies’ most obnoxious fans attempt to turn Harvard’s O’Donnell Field into a Dartmouth home game.

Would that happen at Fenway? Then it shouldn’t here.

—Staff writer Alex McPhillips is Co-Chair of the Harvard Crimson Sports Board. He can be reached at rmcphill@fas.harvard.edu.