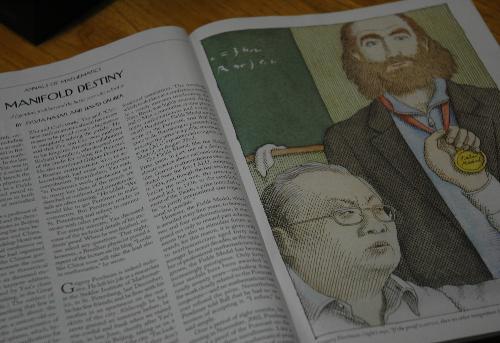 The article on Yau, which was published in late August, alleges that the mathematician has claimed credit where none is due for solving the Conjecture.
Advertisement
Advertisement

Acording to Harvard mathematician Shing-Tung Yau, the first time journalist Sylvia Nasar got in touch with him for a story
By Leon Neyfakh

Acording to Harvard mathematician Shing-Tung Yau, the first time journalist Sylvia Nasar got in touch with him for a story she was writing for the New Yorker, she told him she was interested in the fusion of math and physics as represented in the age-old Poincare Conjecture. Yau, a Harvard string theorist, had a lot to say on the subject—two of his mentees had just completed a full proof of the Conjecture, which had gone unsolved for a hundred years. He happily agreed to talk to her, according to the New Yorker, and the two of them spoke for more than 20 hours over the course of the next four months.

Nasar’s story appeared in the magazine in late August. In it, she and her co-writer, David Gruber, intimated that Yau was a slippery opportunist, not-so-vaguely accusing him of conspiring to seize credit for solving the Conjecture even though a reclusive Russian named Grigory Perelman had done it first. According to the article, Perelman had posted a solution to the Poincare online, without even bothering to formally publish in an accredited math journal. The luminaries of the profession, according to the piece, all agreed that Perelman had done it. The International Mathematical Union had even offered him the Fields Medal, a high honor awarded to brilliant mathematicians under the age of 40. Perelman turned down the prize, saying that his proof spoke for itself, and that no further recognition was needed. Yau, meanwhile, according to the article, enlisted a pair of colleagues and, in an attempt to win prestige in the Chinese math community, had them put together a more technically rigorous, and nominally more complete, version of the proof.

When he read this account, Yau was outraged. A few weeks later, his lawyer sent a letter to Nasar, Gruber, and the fact-checker who worked on the article asking for immediate assistance “in undoing, to the extent possible, the literally world-wide damage” the story had done to Yau’s reputation.

“This is not a matter of mere accusation for the purpose of describing potential legal claims,” the letter said. “Rather, these are matters of documented fact. Collectively, these facts demonstrate that you unfairly soiled the reputation of an individual who has spent his entire life earning, justifiably and on the merits, a reputation as one of the foremost mathematicians of our time.”

Indeed, Yau was construed as a cheater trying to cash in on a loophole, while Perelman came off as a brilliant, ascetic saint who coasted above the fray. The 10,000-word piece was accompanied by a full-page caricature which depicted an angry Yau snatching the Fields Medal from the neck of a serene, bearded Perelman.

Now Yau is fighting back, fervently denying the accusations and demanding an apology from the magazine. In the letter his lawyer sent to the New Yorker, the reporters are accused of fabricating quotes and deliberately molding facts into a narrative they knew to be inaccurate. Furthermore, several professors who were quoted in the article have come out against Nasar, saying that their remarks were misrepresented.

In addition to the letter, Yau has published a statement on his website and spoken out in a webcast that is now available online. “My hope is that the apology and the retraction will be forthcoming and that we can all move on,” Yau said in the webcast, after briefly explaining his objections to the article. “I have always supported Perelman’s receipt of the Fields Medal.” After Yau’s short address, his lawyer spoke for about 30 minutes, first outlining Yau’s charges against the New Yorker as explained in the letter, and then taking questions from the people watching.

At one point, the lawyer quoted an e-mail sent to him by the mathematician Joel Smoller, in which he compares Nasar to the New York Times fabulist Jayson Blair. “It is difficult to communicate the damage done to Dr. Yau’s reputation by this article,” the lawyer concluded, adding that Yau sent the letter with “the very sincere hope that they will act quickly and thoughtfully to withdraw, retract, and correct the misstatements made about him and the attacks against him in this article and to help assist with repairing his reputation.”

The New Yorker has so far not apologized, releasing a statement saying that they “stand by the piece and the journalists.” According to the statement, the article was the result of four months of “thorough, careful reporting and meticulous fact-checking.” “In addition,” it said, “the magazine’s fact-checkers spoke with Dr. Yau for approximately eight hours, they examined notes, tapes, and documents gathered by the authors, and the checkers conducted their own thorough research. Contrary to Dr. Yau’s assertions, the article is nuanced and fair, and was prepared using ethical standards of journalism. Dr. Yau, his supporters and his point of view were given ample space in the article.”

This is unlikely to be the last word, unless Yau decides to shrink back instead of continuing to actively try to discredit the story. Most likely, though, he will keep fighting for his reputation. Only time will tell whether he is a frog whipping butter or an antelope sinking into quicksand. In the end, it will all depend on how they tell the story when it’s over.