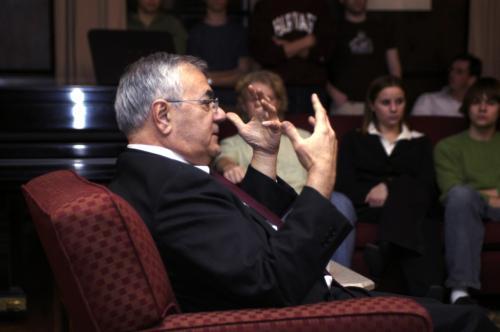 Every year, Eliot House holds its annual Matthiessen Dinner in honor of its first senior tutor, historian and literary critic
By Frances Jin

Every year, Eliot House holds its annual Matthiessen Dinner in honor of its first senior tutor, historian and literary critic F.O. Matthiessen. The distinguished guest this year: Massachusetts congressman for the 4th congressional district, Barney Frank ’62. The openly gay Democratic politician is known for his distaste of small-talk and unnecessary chitchat. FM was just able to steal 15 minutes of Frank’s time, only after the candid congressman had finished addressing an attentive crowd in a packed Eliot Dining Hall. With few formalities, the congressman jumped right in and articulated a few “frank” opinions.

1. Fifteen Minutes (FM): Congressman, you lived in Winthrop House while you attended Harvard. Why are you eating in Eliot House tonight? Where’s the house pride?

Barney Frank (BF): I lived in Kirkland House as an undergraduate and I lived in Winthrop House [when] I was assistant senior tutor from ’64 to ’67. I’ve spoken in the past in Winthrop, but Eliot invited me.


2. FM: I understand that you have been a staunch supporter of the Hinchey-Rohrabacher amendment to stop the prosecution of medical marijuana users, and that it has failed to get through Congress since its conception in 2003. And you were also the author of the States’ Right to Medical Marijuana Act. So you’re a pretty big supporter of medicinal marijuana. I wonder, when did you become so politically inclined about the herb? College?

BF: I remember being interested in politics when I was in high school, in the ’50s. The first political issue I remember being interested in had to do with civil rights—it was the murder of Emmett Till, who was my age, when he was murdered in 1954. We were both 14, and I was so outraged by that. So my earliest political drama was over civil rights and the outrageous mistreatment of black people.

When I got elected to the legislature in 1972, I became an advocate of personal freedom, not prosecuting people for things that were their own choices, and I was for reducing the penalty for the use of marijuana. And when I got to Congress—I forget when somebody brought it to my attention—but as soon as they did I said, “Yeah, that’s crazy,” and I guess I became involved after people started publicly arguing for the right to do it. It may have been during AIDS, because a lot of AIDS patients were using it.


3. FM: You were elected to congress in 1980, and spent several years as a closeted homosexual in D.C.—a decision that was supported by many of your advisers who feared that your sexuality might imperil your career. Throughout those years, what was your outlet? You held that secret for so long?

BF: Most of my straight friends thought I should not come out. Most of my gay friends were all very encouraging.

BF: Yeah, and then he got mad at me because I fired him from being a handyman. He had this dilemma, because he wanted to sort of blackmail me. He wanted to get even with me for firing him, but he couldn’t get even with me by outing me, because I’d outed myself. That’s why he came up with these very elaborate lies, most of which I was able to prove were lies.


5. FM: You’re no stranger to issues of scandal. With the Stephen Gobie incident, after you had come out in 1987, only to have this story broken by the Washington Times two years later, you basically fessed up to everything you did in the situation. We all know how incredibly lurid the Capitol Hill community can be. What did Gobie and D.C. teach you about backstabbing?

BF: Nothing about backstabbing, in general. I came out in 1987—Gobie didn’t surface until well over two years later. So what it made me realize was that when I was closeted I was emotionally vulnerable and much too easily taken advantage of. Retroactively [the Gobie incident] gave me another reason for coming out.


6. FM: And in fact, a certain gentleman by the name of Newt Gingrich—I think you may be familiar with him—spearheaded the effort of the Congress to issue an official “censure.” What do you think of Newt Gingrich now?

BF: I feel the same now that I felt about him then, that he is one of the worst influences in American politics. I think American politics took a real turn for the worse because of him. People who don’t like the viciousness and the negativism—that was him. He kept saying in the ’90s that it was a mistake for Republicans and Democrats to treat each other as friends who have honest disagreements. He really thought Democrats were bad people. Gingrich deliberately set out to make politics angrier and meaner, and said people should not consider the Democrats to be honorable people with whom you disagree. They’re treasonous, they’re corrupt, they’re immoral, so I think his effect on politics was very negative.


7. FM: So you have something called “The Frank Rule,” an issue that became especially relevant during the Mark Foley scandal of 2006, that stipulates that it’s acceptable to out a closeted gay person, if they use their power to hurt gay people. When and how did you come up with this?

BF: That predated the Gobie thing. In 1989 when Tom Foley became the speaker, the Republican National Committee put out a memo saying “Oh Foley and Frank are the same.” They were trying to hint that Tom Foley was gay, by linking him to me. And that’s when I said that if they thought being gay was so terrible, that I would give them a list of all the gay Republicans. And then I said that you have a right to privacy, but not a right to hypocrisy.

BF: Well, they backed off of me.


9. FM: Alright, so I’m a native Jersey Girl, and I know you’re a Jersey native too. But you decided to become a congressman for Massachusetts. Any Jersey pride left? Or do you say you’re from “outside New York”?

BF: Sure, in fact I just went to my 50th high school reunion in Bayonne, Oct. 30. And then on Sept. 27, we had a big family reunion at the Bayonne Jewish Community Center, so I’ve been in Bayonne twice in the last couple months.

BF: I think politicians should stay out of sports. I think sports fans want to enjoy sports. They don’t want us ruining it. Every politician I’ve ever seen go to an athletic event gets booed if he’s introduced. I think separation of sports and politics should come second only to the separation of church and state.

11. FM: You said once in a 1996 interview with The New York Times: “I’m used to being in the minority. I’m a left-handed gay Jew. I’ve never felt, automatically, a member of any majority.” But Congressman, have you ever considered what it might be like to be a woman in politics?

BF: No, because, how could I? I’ve never considered what it would be like to be a straight person in politics. You know, somebody once asked Clare Boothe Luce, the Republican congresswoman and wife of Henry Luce, the publisher of Time Magazine, “How different is it to be a woman ambassador?” She said, “I don’t know. I’ve never been a man ambassador.”

12. FM: In your book “Speaking Frankly” you said that, “[Democrats] usually win when the voters are focusing on issues, but Republicans almost always win when voters are concerned with values.”

13. FM: What would you tell a Republican now who is still voting based on values?

BF: If someone thinks that it is an important issue, I think they should do it. On gay rights, if you don’t like gay people then don’t hang out with us. I think it’s terribly outrageous to penalize people for who they are. Abortion is a tougher issue to deal with because theoretically you do have the possibility of another life, but I think more harm than good will be done by trying to tell the woman what to do.


14. FM: So what do you think the Democrats next move should be?

BF: One, it’s to talk about economic fairness. We have a problem in this society, and it’s not just America. Economic growth in recent years has been accompanied by much more inequality than previously. And you need inequality in a capitalist system, when I talk about equality as a general rule, but there’s too much inequality. I think the Democrats should focus on public policies that deal with this excessive inequality.


15. FM: Alright, last question: So we heard no one contested your position for the November 2006 elections. Does that make you feel like a badass?

BF: Right, a guy wanted to, but he couldn’t get enough signatures to get on the ballot. But the problem is for the Republicans—the national Republican Party to move so far to the right—it makes it very hard for anybody to compete for Congress here.