Politician Wants To ‘Save’ Korea 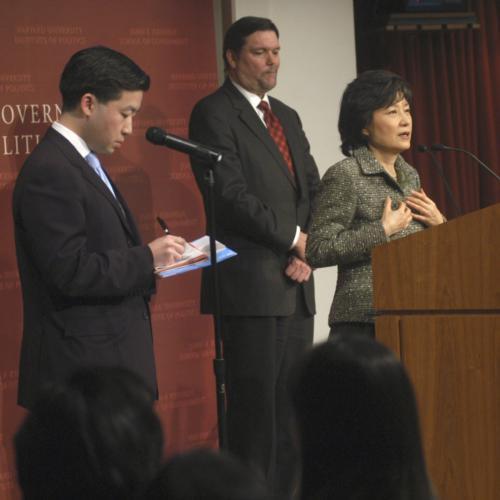 Park Geun-hye, a potential South Korean presidential candidate, addresses the IOP on Korea’s challenges and prospects in the 21st Century.
NO WRITER ATTRIBUTED

The South Korean politician widely expected to become one of the country’s leading presidential contenders—and perhaps South Korea’s first woman president—made clear at the John F. Kennedy Jr. Forum last night what her top priority would be if elected to the nation’s highest office.

“I have only one objective,” South Korean National Assembly member Park Geun-hye said. “I am in to save my country.”

Park, who chaired South Korea’s conservative Grand National Party from 2004 to 2006, said that the international community must “brace for more difficult tasks that surely lie ahead” in dealing with her country’s neighbor to the north.

“South Korea is facing grave security issues of North Korea,” she said. “The threat of North Korea cannot be treated with a ‘business as usual’ attitude.”

“The relationship between the U.S. and South Korea has been likened to a couple on the verge of divorce,” Park said. “Nonetheless, I am not pessimistic about a future U.S.-Korean alliance.”

Students who attended a reception with Park before the speech said they were delighted to have the opportunity to meet the woman who may become South Korea’s next president.

“I grew up listening to my dad praise her dad,” said Sion Lee ’10, who is a member of the Korean Association. Park is the daughter of Park Jung Hee, who served as South Korea’s president from 1961 until his assassination in 1979. Her mother had been assassinated in 1974.

After her father’s death, Park dedicated her life to public service, managing several foundations, a hospital, a welfare center, and a scholarship fund.

Park said that her country’s troubles during its 1997 financial crisis prompted her to become involved in national politics. In 1998, she ran and was elected to the National Assembly as a candidate of the Grand National Party.

Park said that the this December’s election will “determine whether Korea will slip back into oblivion or take a huge step into prosperity in the future.”

Harvard professor David McCann, who teaches Foreign Cultures 80, “Korea at 2100,” wrote in an e-mail yesterday that Park “has been working to revitalize the Korean political scene, to overcome regional differences both north and south as well as cross-regional within the [Republic of Korea].”

McCann, who is the Korea Foundation professor of Korean literature, also moderated a small-group discussion of undergraduates and graduate students yesterday afternoon with Park

At that session, Park said that “the warming-up period is over—it’s time to get serious.”