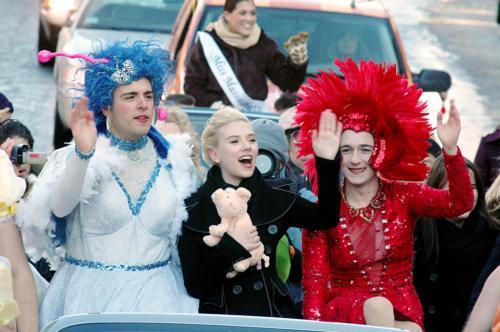 One of the few things heating up the sub-freezing Cantabrigian air yesterday was actress Scarlett Johansson—in town to claim her pudding pot as the Hasty Pudding Theatricals’ 2007 Woman of the Year.

On a slushy afternoon ill-suited for lingering long out of doors, a throng of people collected near the intersection of Mass. Ave and Bow Street to witness the queuing of the caravan that comprised the Woman of the Year’s parade escort.

Amidst a retinue that included everything from superhero impersonators on stilts to a group of students promenading as giant fruit and yellow-suited men on Segway scooters, Johansson sat nestled in the backseat of a Bentley convertible between two drag-clad Hasty Pudding ambassadors.

The actress later expressed admiration for her girlishly garbed squires.

“I wouldn’t be caught dead in a bra and panties on a day like this,” she said in a mid-afternoon press conference. “I certainly felt for those boys—or ladies, as it were. They certainly suffered for their craft.”

But not everyone was so impressed with the day’s events.

“This is not quite as exciting as [the Harvard Foundation’s annual] Cultural Rhythms because last year it was Salma Hayek, and I personally think Salma Hayek is a little hotter than Scarlett Johansson,” said Justin R. Caram ’08, a trombonist in the Harvard band, which marched ahead of Johansson’s entourage.

Caram was later spotted standing on a snowbank at the end of the parade route, holding his brass instrument at his side and shouting for Johansson’s attention among a cluster of excited spectators.

Onlooker Nan Moses, who said she had left her job early to witness the parade, turned her concerns more toward the guest of honor’s welfare than her aesthetic appeal.

“I hope they give that girl something to wear,” she said, prior to the parade. “It’s not a good day for a slinky outfit.”

If she did feel the cold, Johansson—who, as it happened, was wearing a coat over conservative black pants and top—could at least rely on the heat of the 57th annual roast for relief. The roast was held in Agassiz Theater for the second year in a row because of ongoing renovations at the Hasty Pudding Theater.

From there, the pair of roasters moved on to the administration of an “HPT SAT,” which included analogies (“‘my favorite director to work with’ is to Woody Allen as ‘my favorite person to be intimate with on camera’ is to...”) and math (“what is the average age of a person you’re willing to make out with?”).

Johansson only had an answer for the second of the two inquiries, replying “it depends on how much champagne we’ve had that night.”

She was also game when Brener insisted—with purported paternal concern—that “the bottom line is, honey, you show too much skin,” shooting back naughtily, “Are you going to be complaining about that later, daddy?”

And when Johansson was asked to help with a mock photo shoot in which Brener and Rodriguez struck poses intended to mirror those adopted by a nude Johansson and actress Keira Knightley on the cover of Vanity Fair’s 2006 Hollywood issue, she was not shy in telling Rodriguez that he was “going to need to take [his] pants a little lower.”

But despite the give-and-take, Johansson had nothing but kind words for those who had guided her through her stay.

“Thank you for this fabulous golden pot,” she said after the roast was over. “It’s been a wonderful day. This is the closest I’ll get to a Harvard degree, for sure.”

Regarding the quality of the males that she encountered at Harvard, the actress, named 2006’s “sexiest woman” by both FHM and Esquire magazines, had favorable comments to offer.

“Everybody is very, very charming,” she said. “It’s the first time I’ve seen so many 21-year-old men in suit and tie, and I don’t know whether I like them better in suit and tie or stockings.”

—Staff writer Christian B. Flow can be reached at cflow@fas.harvard.edu.