Latkes vs. Hamantashen: The Promised Food 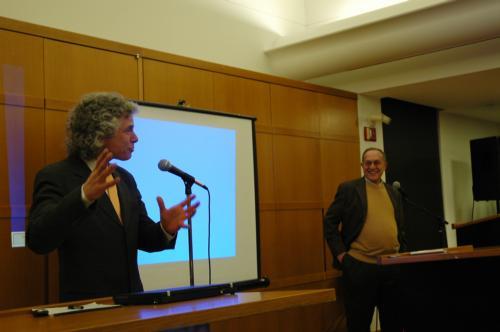 Potato or poppy? For the chosen people, it’s been an age-old debate over their chosen food. And last night, Frankfurter Professor of Law Alan M. Dershowitz and Johnstone Family Professor of Psychology Steven Pinker evoked health, terrorism, and evolution to end the dispute between latkes and hamantashen once and for all.

The two professors, who face off weekly in their new spring course Psychology 1002, “Morality and Taboo,” argued the merits and tastes of the two Jewish delicacies in front of a packed Beren Hall at Harvard Hillel.

Dershowitz, who has defended high-profile figures such as O.J. Simpson and Claus von Bülow, took the stand to attack high-cholesterol latkes.

To combat the proclivity for the potato-based products, Dershowitz proposed a nine-step program that would focus on sufganiyot (jelly doughnuts), “a sweet food that closely resembles the hamantash.”

Pinker, who delivered his spiel for starch in characteristic PowerPoint form, introduced a forthcoming book, “The Latke Instinct: Why Latkes are Compatible with Universal Grammar and Human Nature.” The psychologist has penned many bestsellers, including a 1994 book titled “The Language Instinct: How the Mind Creates Language.”

Sticking to his schtick of linguistic analysis, Pinker derided hamantashen for being an irregular plural. Using the Wug Test—a common linguistic experiment—Pinker showed that “latke” to “latkes” is a progression of a regular plural form and therefore “part of our innate universal grammar” while “hamantashen” belongs to a scanty contingency of irregular plurals in English that end in “en.”

Pinker declared emphatically that “One cannot endorse a food item that leaves its eaters unsure about how to refer to eating more than one!”

Even worse than being grammatical gaffes, hamantashen are also morally wrong, Pinker insisted.

“The poppy industry supports drugs, terrorism, inner-city crime, and civil war in Latin America,” Pinker said, his voice drowned out as the room erupted in guffaws. He called on the latke lovers to sign his petition calling on Harvard and MIT to divest from companies that buy or sell poppy seed hamantashen.

Pinker also lauded latkes, which he said contained more calories than hamantashen, as being essential to evolutionary adaptation.

“In times of famine, those of our ancestors who chose latkes and sour cream over hamantashen were more likely to survive and reproduce,” the potato-promoter said.

In his rebuttal, Dershowitz said that today’s problem is one of obesity, not starvation. However, in response to an audience member who pointed out that latkes can be versatile in their place on the menu, while hamantashen are restricted to being desserts, Dershowitz reverted to espousing the tenet of carpe diem.

—Evan M. Vittor contributed to the reporting of this story. —Staff writer Lulu Zhou can be reached at luluzhou@fas.harvard.edu.