Albright Calls for Diplomacy in Iraq

'Armageddon is not a foreign policy,' former Clinton diplomat says 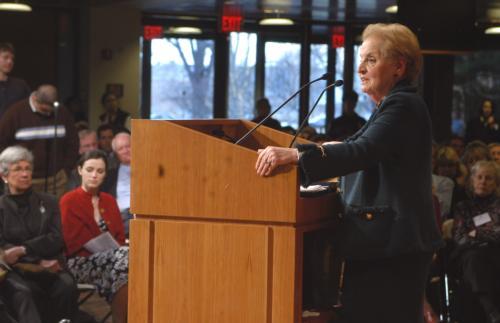 “The victor of the war in Iraq is Iran,” Madeleine Albright, former Secretary of State and U.N. ambassador, told an IOP audience yesterday.
By Brenda C. Maldonado, Crimson Staff Writer

Saying that “the victor of the war in Iraq is Iran,” Madeleine K. Albright prescribed a regional approach to the problem, encouraging countries to engage in diplomacy and to realize that it was in their best interest to resolve the conflict in Iraq.

“Armageddon is not a foreign policy,” the former secretary of state said last night at an Institute of Politics forum co-sponsored by the Divinity School.

“When we’re trying to solve difficult national issues its sometimes necessary to talk to adversaries as well as friends,” Albright told the crowd. “Historians have a word for this: diplomacy.”

An ambassador to the United Nations from 1993 to 1997, Albright became the first woman to hold the office of Secretary of State in 1997. She played a key role in American policy in Bosnia and the Middle East, leaving the post in 2001.

Though she described herself as an “optimist who worries,” much of Albright’s speech dealt with what she saw as a dire situation in the Middle East.

“American presence is the solution and the problem,” she said of Iraq. “For us to just leave it in chaos is irresponsible.”

Albright stressed that multilateralism should be the means by which to secure peace rather than an end unto itself, and she added that the lesson she learned from her role in Bosnia was to accomplish goals “multilaterally if you can, unilaterally if you must.”

But American involvement in Iraq was not a necessity, she said, adding, “I believe the war was a war of choice.”

She urged powers in Iraq to engineer a fair distribution of the country’s oil, protection of minority rights, and a balance of power between Baghdad and outside regions.

Albright spoke about the future of American troops in Iraq with a similar sense of bleakness.

“It would be a disaster to leave under present circumstances. It would also be a disaster to stay,” she said, adding that in a situation where neither outcome was desirable, “We should bring them home sooner rather than later.”

She added that she did not advocate a deadline for withdrawal, but would prefer to set goals, “especially for preparing Iraqis to assume responsibility.”

Albright said that the war’s disastrous outcomes were ultimately the results of Bush’s failure to familiarize himself with the political culture of the region.

Albright, who published the book “The Mighty and the Almighty: Reflections on America, God, and World Affairs” in 2006, also spoke about the need to recognize religion as a deep-rooted source of tension in the Middle East, saying the U.S. should “return to job as an honest broker” in the Israeli-Palestinian conflict.

Repeating throughout the night that she was not a theologian and choosing to identify herself as a “problem-solver” instead, she pointed to the problematic belief within Islam, Christianity, and Judaism that a “decisive battle” would determine the region’s future.

Though she said that currently, there existed a “battle using religion as a club to hit each other over the head,” Albright did affirm her hope for a new direction in the future.

“What people have the capacity to choose,” she said, “they have the ability to change.”

—Staff writer Brenda C. Maldonado can be reached at bmaldon@fas.harvard.edu.