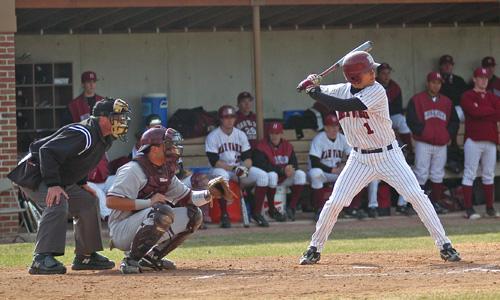 Junior centerfielder Matt Vance went 11-for-16 this weekend to lead the Crimson to two wins against Rolfe Division rival Brown. The series split left the squads tied for first in the division, with six games left to play. The first-place finisher advance By Timur Kalimov
By Douglas A. Baerlein, Contributing Writer

PROVIDENCE—The Harvard baseball team split its second doubleheader of the weekend yesterday against Brown to remain tied with the Bears atop the Red Rolfe Division of the Ivy League.

A sweep of the second half of the four-game weekend series would have given the Crimson (14-15, 9-5 Ivy) sole possession of first place and the inside track at a spot in the Ivy Championship Series. Instead, Harvard dropped the first game, 5-2, before recovering in the second to leave Providence at .500 for the weekend.

Harvard will now have to hope that Brown (14-17, 9-5 Ivy) falters during the last two weeks of league play.

“We came in wanting to win three of four, obviously, because Brown is a big gun,” said junior third baseman Steffan Wilson. “After we split [Saturday] we needed to come out and win the first game, but we came up a little short. That was hanging over our heads in the second game.”

A six-run second inning put the Crimson firmly in control of the late game yesterday and the team never looked back, capitalizing on eight solid innings from junior righty Brad Unger.

After the Bears got out to a 2-0 lead in the first inning, Harvard freshman designated hitter Andrew Prince led off the second with a double. Five hits, two errors, and one intentional walk later, and Prince was appearing for a second time in the inning. Prince grounded out to end the inning, but by that time, the Crimson had established a comfortable 6-2 lead.

Prince was brought home after his first at-bat on an RBI double by junior right fielder Tom Stack-Babich. Senior Andrew Casey, sophomore Jeff Stoeckel, and Wilson all singled, but the Harvard offense received a good deal of help from two crucial throwing errors by the Brown defense and a wild pitch from Bears hurler Alex Silverman.

The Crimson added two more runs in the fourth, one on a solo home run from junior second baseman Griff Jenkins—filling in for injured captain Brendan Byrne—and a single run in the fifth to complete its scoring for the day.

It was an impressive offensive performance in a game that Harvard had to win to keep pace with Brown.

“We had our backs against the wall,” head coach Joe Walsh said. “And with them having a one-game jump and playing at their house, we had to take game two.”

Wilson pointed to Byrne’s leadership and junior Matt Vance’s offensive hot streak as two of the key factors in the team’s ability to rebound from the early loss. Byrne took the team aside between games and stressed the importance of getting out to an early lead. And Vance came through at the plate, going 3-for-4 with an RBI. He was 6-for-8 on the day and 11-for-16 on the weekend.

Unger, who was credited with the win, allowed four earned runs on 10 hits while striking out four and walking two. He quickly settled into a rhythm after allowing three two-out doubles in the first.

“There’s nine innings in a game,” he said. “You can’t let two first-inning runs get to you. I knew our offense would come up with a lot of runs, especially in game four of an Ivy League weekend.”

Brown third baseman Robert Papenhause blew open a 2-2 game in the bottom of the sixth inning with a two-out, three-run home run off of freshman pitcher Eric Eadington to push the Bears past the Crimson, 5-2.

After getting the first two Brown batters of the sixth to fly out, Eadington allowed a double to shortstop Matt Nuzzo and then walked designated hitter Bryan Tews before Papenhause stepped to the plate.

Eadington looked strong in the early going, as the Crimson built an early 2-0 lead on a second-inning sacrifice fly from freshman Chris Rouches and a third-inning solo home run by Vance. But the rookie lefty allowed two runs in the fourth— one on a wild pitch—and was lucky to pitch himself out of a fifth-inning jam.

After allowing the sixth-inning home run, Eadington then hit Brown outfielder Ryan Murphy with a pitch. The plunking escalated the tension in an already emotional contest.

Both benches were vocal throughout the game, and the Harvard dugout repeatedly expressed its displeasure with the work being done by the home-plate umpire.

“I felt that the [umpire] was having a real tough time,” Walsh said. “It was on both sides but seemed to affect us a little bit more calling strikes.... We were conscious of every one of his calls.”

Crimson assistant coach Todd Carroll was ejected during the top of the fifth inning for arguing a called third strike on Wilson. Wilson, who was 1-for-4 in the game, expressed appreciation for his coach’s support, but both Wilson and Walsh said that the outcome of the game was not a result of the umpiring.

“You can never put it on the umpire,” Wilson said. “I had a tough day at the plate. I thought some of those [pitches] were balls that he punched me out on.”

Wilson was caught looking at a 2-2 pitch to end the game.