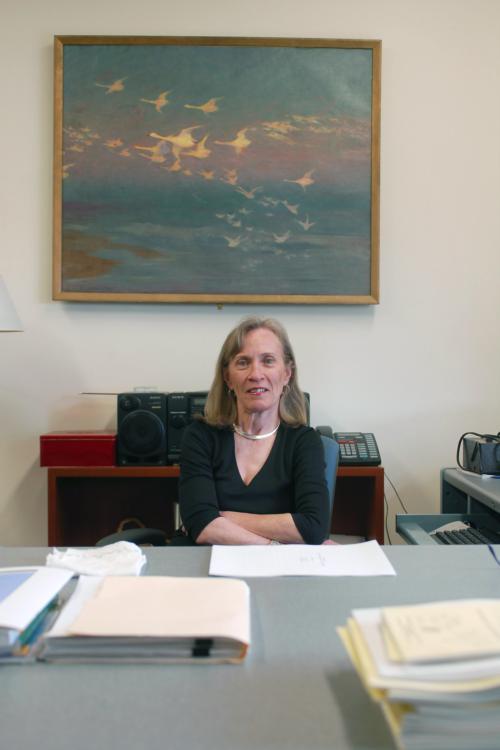 “Gender will always be a difference,” says Claudia Goldin, explaining why she has continued to come back to studying women in economic history.

“No matter how many of these differences begin to fade, I don’t think that they’ll ever go away entirely,” she says.

What Goldin sees, though, is that today these different ways of life often result from the different choices men and women make, rather than from discrimination.

For her next project, the Lee professor of economics will study men and women’s transitions into and out of work and why they make different choices about work and family.

“Equivalent men and women, who go to the same college, graduate from the same law school, get the same job after graduation—we see them ten years later, the guy’s making a gazillion and the woman is in a small practice making maybe 60 percent as much,” Goldin says.

“Why is that the case? Most likely, she made a conscious decision to shift into a smaller practice that didn’t have 80-hour work weeks to combine family with career and to do it in a way that was satisfying. Now, why not her husband?”

Questions such as these have long fascinated Goldin as she has studied the factors leading to inequality—in gender, race, and education.

Previously, this has led her to study slavery in the antebellum South, labor participation of black and white women in the 1970s, and the history of wage inequality in the U.S.

The latter topic is the subject of her latest book, co-written with her partner and colleague, Allison Professor of Economics Lawrence F. Katz.

For Goldin, writing about women is not a political decision but an academic one.

“Women were always the interesting group to study among economists...women were the ones who had the elastic labor supply,” she says. “If things aren’t changing, they’re not that interesting.”

Goldin made her name with the 1990 publication of “Understanding the Gender Gap,” in which she argued that the increasing participation of women in the workforce was a slow and historical process not dependent on the advances of any one generation.

She followed this up with three papers studying the positive effect of the birth control pill on women’s willingness to invest in careers, all co-authored with Katz.

Goldin says her work on the pill was “very specific to the moment when women were coming out of really very much a dark age, preceding enormous change.”

WOMAN IN A MAN’S WORLD

In 1990, Goldin became the first woman to be tenured in the economics department. There have been two more since.

“It’s very unfortunate that the percentage of tenured women in top economic departments in general is as low as it is,” says James H. Stock, the chair of Harvard’s economics department.

Goldin is also the director of the American Economy program at the National Bureau of Economic Research.

She plays down the potential difficulties of being a female academic.

“I wouldn’t be here if I faced a lot of difficulty,” Goldin says.

But she adds that she has at times felt marginalized because of her gender—especially at the beginning of her career, when she worked at Princeton.

“It was right after it had become co-ed. It was sort of closed off in many different ways, stuck in 1953,” she says.

She tells the story of a colleague at Princeton who said he would write a paper on the taxation of belly button lint if it would get him published.

“I remember thinking to myself, ‘I wouldn’t’,” she says.

Goldin says that, as a woman, she was not as competitive as her male colleagues.

“There was a time when I probably was not as pushy as my male friends, who figured out the right things to do to get tenure at certain places. They would...go to dinner parties and schmooze...suck up to the right people. And I never really did that.”

During graduate school at the University of Chicago, Goldin worked with renowned economists such as Nobel laureate Gary Becker, who, she says, “turned light bulbs on in my head that I didn’t know existed.”

“Claudia was a very good student, considered one of our top students,” says Becker, for whom Goldin worked as a research assistant.

“She’s very good at the qualitative, at digging out data, interpreting data in light of economic analysis—not just putting down numbers but giving it an interpretation,” he says.

THE STATE OF WOMEN TODAY

“There are still discrimination cases that we find in the newspapers that outrage us. That women working for some accounting firm are doing the same job and being paid less. I think it’s less so now than it was, possibly because we became, as a nation, far more aware that this is not just wrong but it is illegal.”

Women graduating from college certainly have more options but must still make sacrifices, she says.

Goldin adds that the most important question facing women graduating from college today is whether they can find a job where it is possible to combine family and career.

She says she has not yet formed an opinion on the conflicting ideas of modern feminism.

“There’s the notion that you should celebrate difference, that women are actually better in various ways—the notion that we get from Sex and the City... women who wear five-inch heels and kick ass. Whereas second-generation feminists eschewed high heels as being symbols of patriarchy,” she says.