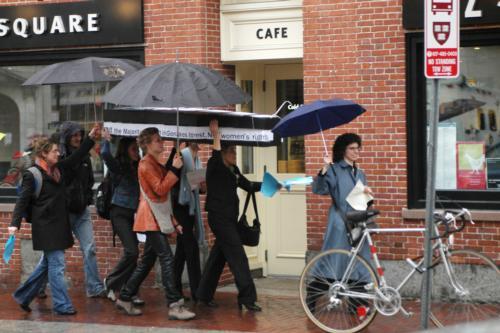 Last week’s Supreme Court decision that upheld the Congressional ban on “partial-birth abortion” was the focus of an unconventional protest at Harvard Law School yesterday, when students from a law seminar carried a black cardboard coffin, symbolizing the decision in that case, through the rain from Langdell Hall to the Charles River.

The group of seven women and one man who put on the mock funeral procession called themselves Women Against the Majority Opinion. They wore black and handed out fliers describing their protest as they walked through the streets of Cambridge. Writing on the side of the coffin said that the aim of the protest was to “put the majority opinion in Gonzales to rest, not women’s rights.”

The group planned the protest as the culminating exercise of a seminar on the high court and reproductive rights taught by Janet Benshoof, a lecturer at the Law School. The protest was staged because the language of the decision “opened the door for legislation to ‘save women from themselves,’” Benshoof said, quoting from last week’s majority opinion in Gonzales v. Carhart.

Benshoof, a Law School graduate, is an attorney, the founder of the Center for Reproductive Law and Policy, and the current director of the Global Justice Center. Her seminar, called “Reproductive Rights and the Jurisprudence of Equality in the Context of a Transforming Supreme Court,” is the last she is teaching here as her stint at Harvard ends.

When the group reached the river, Verdi’s Requiem sounded from a portable stereo. Benshoof read several quotations, including one from Holocaust survivor Elie Wiesel that said, “The opposite of life is not death, it’s indifference.”

After the reading, the group launched the coffin into the Charles River and then tried to burn pages from the majority opinion. After one student successfully lit a piece of paper on fire, Benshoof told him, “That’s the best thing you’ve done in law school.”

Asked why she decided to protest today, Sydney B. Schaub, a third-year at the Law School, said, “Women’s rights in America are really abysmal under the law.”

“I think we are all really upset about the opinion and there wasn’t really a public forum” in which to question the decision, said Joanna R. Pozen, a student at the Harvard School of Public Health.

Rachel Wainer Apter, a third-year at the Law School, said that “having a spectacle funeral as our last class was appropriate.”

Benshoof said the topics covered in her seminar are crucial for law students today. Asked whether she would be returning to Harvard, Benshoof said, “I feel the jurisprudence around women’s equality should be a required first-year course. And when it is, I’d be happy to come back and teach.”