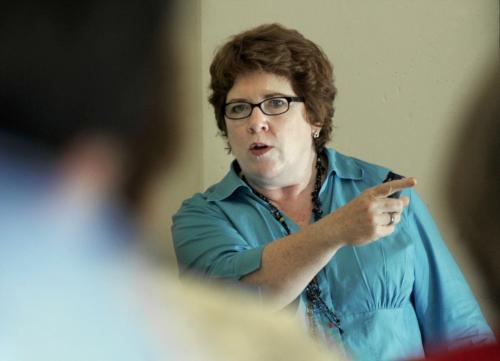 Marilee Jones, who resigned Thursday as MIT's dean of admissions, in a July 2006 photo. She admitted to misrepresenting her degrees on her resume.
By Zachary M. Seward, Crimson Staff Writer

The Massachusetts Institute of Technology’s dean of admissions, Marilee Jones, resigned Thursday and confessed to the ultimate sin of her profession: lying on an application.

Jones, who had led the admissions office since 1998, falsely claimed degrees at three schools in upstate New York, an MIT spokeswoman said. In reality, Jones briefly attended just one of the schools, Rensselaer Polytechnic Institute (RPI), and never enrolled at the other two.

In a prepared statement, Jones said she had “misled the Institute about my academic credentials” in applying for her first job at MIT in 1979, and “did not have the courage to correct my resume when I applied for my current job or at any time since.”

The revelation was a shocking turn for Jones, who had been highly regarded in her field and widely praised for MIT’s efforts to reduce student anxiety in college admissions. Her profile surged last year with the publication of “Less Stress, More Success,” which she wrote with a pediatrician, Kenneth R. Ginsburg.

Among other pieces of advice in the book, Jones warned students against “making up information to present yourself as something you are not.” She wrote, “You must always be completely honest about who you are.”

MIT said that Jones listed degrees on her resume from RPI, in Troy, N.Y.; Union College, in Schenectady, N.Y.; and Albany Medical College.

Sharon Kunkel, the registrar of RPI, said Jones attended the school part-time from September 1974 to June 1975 but never received a degree. Representatives for Union and Albany Medical said Jones had never attended their schools.

MIT announced Jones’ resignation Thursday morning in a brief e-mail to students and faculty. Stuart Schmill, formerly senior associate director of admissions, was named to fill the vacancy until a permanent successor is found. The shake-up comes at the tail end of the admissions season, with matriculation decisions due next week.

“This is a sad and unfortunate event,” Daniel E. Hastings, the dean for undergraduate education, said in a statement. “But the integrity of the Institute is our highest priority, and we cannot tolerate this kind of behavior.”

It was not clear what degrees, if any, Jones actually earned or where else she may have attended school. In retrospect, inconsistent accounts of her education in the press and other sources could have raised red flags.

Profiles of Jones in The New York Times and Boston Globe last year said she earned bachelor’s and master’s degrees in chemistry and biology from RPI. A short biography on the Web site of the National Association of College Admission Counseling referred to her as “Dr. Marilee Jones, Ph.D.” and said she had degrees in biology and chemistry from RPI and Albany Medical, without specifying further. She was scheduled to speak at the association’s annual conference in September.

The statement by Jones Thursday, which said she would have no further comment, apologized “for disappointing so many in the MIT community and beyond who supported me, believed in me, and who have given me extraordinary opportunities.”

In interviews with other media outlets on Thursday, Phillip L. Clay, MIT’s chancellor, said the school received a tip questioning Jones’ credentials last week. MIT looked into the matter and asked for Jones’ resignation on Monday.

Jones’ first, entry-level job in the admissions office did not require a college degree, Clay said, and she apparently advanced to higher positions without a review of her resume.

MIT would not provide a copy of the resume Jones submitted to the school or specify what type of degree she claimed to have earned from each institution. MIT’s Web site appeared to contain no biographical information for Jones.