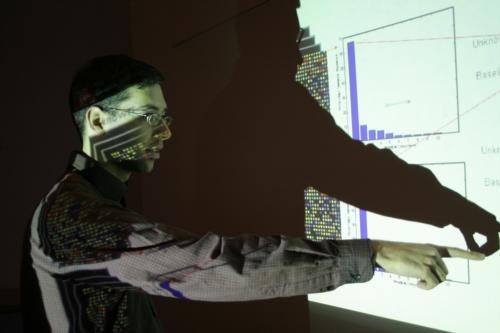 A Harvard teaching fellow has found a way to translate DNA into music, and hopes these sounds will eventually be used to monitor sick patients.

While showing protein structures on a screen, Alterovitz played the compositions made when he matched up certain instruments to protein structures, creating harmonious melodies for healthy patients and atonal ones for sickly ones.

For now, he hopes the project will educate the public about genetics.

“People listen to music,” Alterovitz said. “People see movies and videos and so forth, and this is a way for people to learn about bioinformatics and some of the new things going on by actually interacting and viewing it through different mediums.”

Alterovitz, who led the research at HMS and MIT, believes that once practical methods of real-time genetic monitoring are available, doctors will be able to improve treatment by using this technology to monitor patients and interpret symptoms of disease.

As a student, last at the joint Harvard-MIT Health Sciences and Technology Ph.D program, Alterovitz said he was interested in patient monitoring and eventually began exploring a way to represent complex genetic structures in a more accessible format. Ultimately, this led him to music.

The principal display at the exhibit dealt with a comparison of the protein structure of a healthy patient against that of a cancer patient. Using different musical instruments to represent different variables, the models included a baseline upon which the two individual’s genetic music would be placed.

“The normal patients relative to the baseline sound harmonic,” Alterovitz explained, “whereas [with] the cancer patients, it sounds more inharmonious.”

Alterovitz offered numerous tours of the exhibit, which was filled with disco lights and an array of laptops, and explained the potential of his discoveries to students who assaulted him with their questions.

Though Yajun Fung, a graduate student at MIT, wished the event had been better advertised, she was excited about Alterovitz’s work.

Fung said that she never thought “the arts and the science could be combined in this way.”

“Music is one of the most powerful things in the world and to link genes to music is a very, very interesting idea,” said Srujan Linga, another MIT student and a part-time DJ.

The exhibit coincided with National DNA Day, which celebrates the discovery of the double-helix structure as well as the 2003 completion of the Human Genome Project.

But Alterovitz didn’t shy away from the potential entertainment value of the science project as well, treating the small crowd at the exhibit to his genomic techno “remix.”