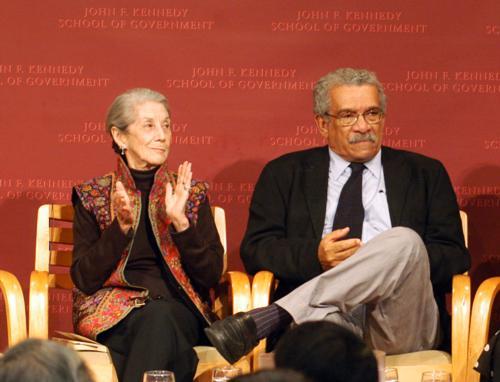 Derek Walcott, right, seated next to Nadine Gordimer at a recent event at the Kennedy School. He was accused of sexual harassment in 1982.
By Angela A. Sun, Crimson Staff Writer

Students in the graduating class of 1982 were able to take advantage of the presence on campus of Derek Walcott, the already-prominent poet and future Nobel Prize winner, who held the post of visiting professor of English during their senior year and taught several classes.

But one student’s interaction with Walcott landed the Boston University (BU) professor in the pages of the New York Times that year: a Harvard sophomore accused him of sexual harassment, and alleged that after declining his advances, she was given the only “C” in his class.

According to Crimson reports of the incident at the time, in the spring of 1982, a sophomore—who remained anonymous throughout the drawn-out controversy—claimed that during a discussion of her poetry, Walcott suddenly said that he did not want to discuss poetry and began to discuss sex, asking the student, “Would you make love with me?”

“Walcott has acknowledged that the student described his conduct accurately, according to a letter to the freshman from assistant dean of the college, Marlyn McGrath Lewis ’70-’73,” The Crimson reported in a June 8 article of that year.

In response to the incident, then-Dean of the Faculty Henry Rosovsky sent a letter to BU admonishing the then-55-year-old West Indian poet for his actions. Walcott retained his post at the University.

The Crimson and the Times also reported at the time that Harvard’s Administrative Board granted the student’s request to change her grade to a “pass” in October of that year.

The incident came at a time when Harvard was revising its sexual harassment policy and response procedures, and was one of several high-profile harassment allegations in the surrounding years.

In 1979, Helene S. York ’83 accused Professor of Environment Martin L. Kilson of attempting to kiss her during off-hours. In 1983, Professor of Government Jorge I. Dominguez was disciplined for sexually harassing a female junior faculty member in the department. And in 1985, Professor of Government Douglas A. Hibbs Jr. said he would resign after being accused of sexual misconduct, according to Crimson articles at the time.

A February 1985 Crimson article wrote that the series of incidents “ultimately led to the revision of Faculty guidelines for handling sexual harassment claims.”

Sidney Verba ’53, who is stepping down this month as the director of the University Library, says that he was “involved in that issue about 25 years ago,” but does not remember the specifics of the proposals made.

“There has been a vast cultural change in that quarter century,” he writes in a recent e-mail. “My sense is that things are a lot better and a lot more recognized than back then, but that does not mean that utopia has arrived.”

Several professors and administrators who were involved with Walcott’s case were contacted by The Crimson say that while they appreciated the fact that the harassment cases prompted a change in policy, they do not remember the Walcott incident particularly clearly.

Porter University Professor Helen Vendler, also a visiting BU professor of English at Harvard at the time, says that she largely remembered the incident only insofar as the Times had reported it.

“We were all so buried in what we were supposed to be doing every day,” she says. “Some little grade dispute—who knows about it? It was recognized that there was something askew about the grade that was given.”

And Higginson Professor of English Literature Larry D. Benson, who was the chair of the English department in the latter half of 1982, says that the incident “wasn’t anything that left a deep impression on me.”

“I don’t have a very clear remembrance of this harassment and certainly that doesn’t interfere with my admiration for him,” he says.

Lewis—now the director of admissions for the College—recently declined to comment on the incident, as did Rosovsky.

But a 1996 article in The Chronicle of Higher Education reported that Walcott was again accused of sexual harassment by a student at his own university. According to The Chronicle, Nicole Niemi, a graduate student in BU’s playwriting program, claimed that Walcott threatened to keep a play she wrote from being produced unless she had sex with him. BU officials could not be reached for comment on the case.

Since the 1982 incident, Walcott has returned to Harvard’s campus twice. In 2003, he gave a reading of his works at the W.E.B. DuBois Institute, the nation’s oldest research center dedicated to the study of African-American history and culture. In 2005, Walcott came to the Institute of Politics for an event called “Season of Laureates: Readings in Honor of the 70th Birthday of Wole Soyinka,” cosponsored by the Du Bois Institute.

Henry Louis “Skip” Gates, Jr., the Fletcher University professor at Harvard and director of the DuBois Institute, said that he had no knowledge of the accusations against Walcott, who is one of three African American winners of the Nobel Prize for literature.

“We look forward to welcoming him back to speak at Harvard, I hope,” he said of Walcott, “in the very near future.”

—Staff writer Angela A. Sun can be reached at asun@fas.harvard.edu.