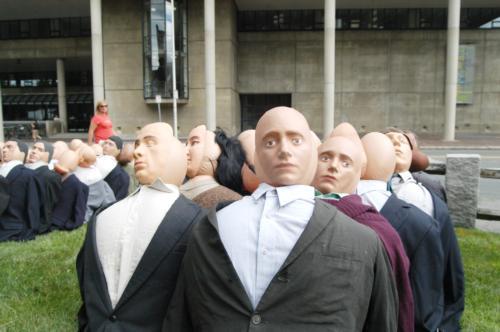 Mannequins dressed in 1930s-style clothing sit on the grass outside Sanders Theater on Saturday. They, along with hundreds of similarly-clad human extras, were on hand for the filming of Denzel Washington's new film, "The Great Debaters," set to open next
By Abby D. Phillip, Crimson Staff Writer

White tents, large generators and an oddly dressed collection of mannequins graced the lawn in front of Memorial Hall this weekend, as Sanders Theater was the site of filming for a new Denzel Washington flick, “The Great Debaters.”

The movie chronicles the true story of Melvin B. Tolson, a 1930s-era professor at Wiley College, located in Marshall Texas. In 1935, Thompson led a recently-formed debate team made up of Wiley students to a win over Harvard in the national championship.

In addition to directing the film, Washington will star as Tolson when the movie is released next year. Forest Whitaker and Kimberly Elise are also slated to appear in the film, according to the Internet Movie Database.

The commotion surrounding the movie brought with it the chance for fame for some Harvard students.

Yale A. Zeller '10 and Benjamin P. Schwartz '10 were just two of the eager people on set early Saturday morning in exchange for $100 and the chance to see one of Hollywood’s brightest stars in action.

“I got a prop,” Schwartz said, “which in the world of extras is a big deal.”

Zeller said that most of the weekend involved filming only a small portion of one of the debates and shots of a spectator filling Sanders Theater.

“They only did the introductions,” he said. “Most of the debate is going to go on elsewhere.”

Harvard has not allowed a movie to be filmed on its campus since 1979, when the University told the crew filming "A Small Circle of Friends" on campus to leave because of a number of complaints.

Washington’s crew, however, was granted permission to rent out the space for the weekend, similar to the way Sanders is rented out for concerts. Weekend tour groups were even barred from seeing the inside of Memorial Hall, often one of the highlights of campus tours.

The casting company in charge of obtaining extras, C.P. Casting, Inc., asked for help in recruiting 100 additional extras on Sunday to add to the crowd of 600 already hired to fill the seats of Sanders, according to Ruth A. Polleys, the program manager for Memorial Hall.

E-mails were sent to Harvard Summer School proctors in an attempt to get the word out about the job opportunity.

But Summer School administration determined that the high school students should be excluded from the casting call, according to an e-mail sent by Brendan W. Randall ’88, one of the Secondary School program’s assistant deans.

“There were concerns for the secondary summer school students being too young,” said Polleys, referring to the 18-40-year-old age range that the casting call specified. She added that concerns regarding impending midterms for many students also contributed to the decision to restrict the casting call to college students.

Washington visited Harvard in March, then in the preliminary stages of identifying sites for filming.

This isn’t his first interaction with the University regarding one of his films. The Oscar-winning actor debuted his 2000 Disney movie “Remember The Titans” at the Carpenter Center, while 2002’s “Antwone Fisher” was shown two weeks before its release at the same venue.

The Boston Globe reported Monday that nearby Memorial Bridge would be closed for two hours on Monday night “for the filming of a movie,” though it is unclear whether the film in question is “The Great Debaters.”

The movie is being produced by the Oprah Winfrey-owned Harpo Productions. A specific release date has not been set.

—Staff writer Abby D. Phillip can be reached at adphill@fas.harvard.edu.