Centuries-old bells to be returned to Moscow next year in exchange for new, 18-piece set 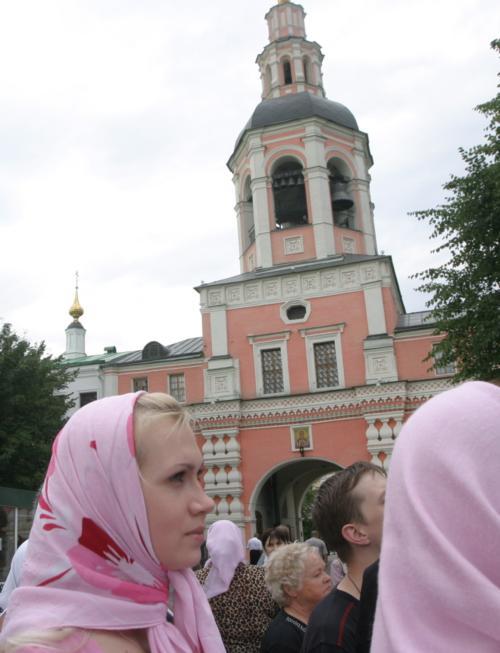 Crowds of worshippers watch the consecration of Lowell House's new bells in Moscow on Tuesday. The Danilov Monastery's belltower, the past and future home of the 17 bells that have hung in Lowell since 1930, is in the background.
By Anton S. Troianovski, Crimson Staff Writer

MOSCOW—Lowell House's new bells got quite a send-off on Tuesday as the Patriarch of the Russian Orthodox Church consecrated them at a ceremony attended by the Moscow mayor, a crush of news media, and hundreds of believers.

Even though it will be a year until all of Lowell's current bells return to the Moscow monastery where they hung until 1930, officials hailed Tuesday's event as a milestone in the post-communist rebirth of the Orthodox Church.

A throng of worshippers gathered in the outdoor courtyard of the Danilov Monastery where the hour-long ceremony was held, standing on their toes to get a peek at their spiritual leader, Patriarch Alexy II, as he blessed the bells with incense and performed other Orthodox rites.

Alexy reminded the crowd of the value of the centuries-old bells that an American industrialist saved from destruction in 1930 and donated to Harvard, saying they would become only the fourth set of church bells in Russia that survived the "warring atheism" of the Soviet Union.

He also thanked the Harvard administration for their cooperation in finally agreeing to return the bells after 20 years of negotiations, and sought to reassure the University that the gleaming new bells would be as good as the old ones.

"Without exaggeration, one can call them the best church art of modernity," he said.

Seventeen of the bells will be installed in the Lowell belltower during the summer of 2008. An 18th bell will take the place of one hanging in the Business School's Baker Library. To make sure that future Sunday melodies on Mt. Auburn Street are on key, the agreement outlining the bell exchange calls for an endowment for cultural exchange and for musical training to teach future Lowell residents how to ring them.

Tuesday's ceremony also turned out to be a public-relations boost for the Russian government as it tries to portray the country's ties with the United States as alive and well. At least four state-owned television channels were on hand to record the proceedings, which were broadcast on the evening news in Moscow.

Viktor Vekselberg, the oil and metals tycoon who reportedly paid several millions of dollars to bring the bells home and to replace them with new ones, said he hoped they would become a "great symbol of unity" between the United States and Russia.

"These bells will, of course, be our ambassadors to faraway America on the other side of the ocean, and let them always ring only for peace and friendship," he said.

The only speaker who earned a round of applause, however, was Lowell House Co-Master Diana L. Eck, who was also the only member of the Harvard delegation to speak.

"Some suggested we should have English bells or Russian bells, but no—we felt that our history was entwined with yours here in Russia," she told the crowd, wearing a black headscarf in accordance with Orthodox custom.

Afterward, several people remarked unprompted that they were moved by Eck's brief speech.

"To think that when you have Commencement our bells ring, and for their entire history, for 400 years, they rang in Russia and then ended up at Harvard, with students, at a university—all this is very touching," said Elena, 49, a school teacher.