Harvard should 'come with an owner’s manual,' University president says 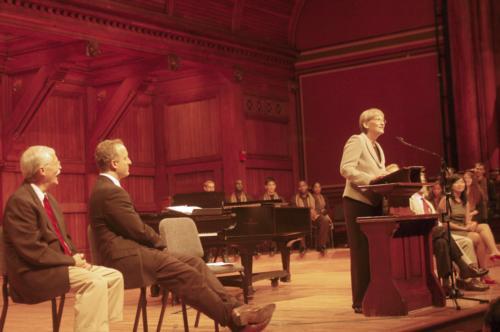 Freshmen from the Class of 2011 were not the only ones with butterflies in their stomachs during yesterday’s opening ceremonies.

For many of the Harvard administrators speaking to the newly-minted College students, the event was also a first.

It was the first time Drew G. Faust addressed students as University President since taking office on July 1, and the first time Michael D. Smith addressed them in his role as Dean of the Faculty of Arts and Sciences. And veteran administrator David Pilbeam—who stepped in as interim dean of Harvard College after former Dean Benedict H. Gross ’71 resigned recently—had not spoken at opening ceremonies in 20 years.

Only Thomas A. Dingman ’67, who has been dean of freshmen since 2005, has addressed students at the event in recent years.

Between student musical performances, the administrators welcomed the incoming class and reassured their nervous parents by highlighting the University’s opportunities and stressing its improved advising system.

“The place ought to come with an owner’s manual or at least a map, a whistle, a compass, and a sandwich,” Faust joked.

She also encouraged the incoming class to explore Harvard’s many opportunities.

“Think of it as a treasure room of hidden objects Harry discovers at Hogwarts,” Faust said.

In her short speech, Faust emphasized Harvard’s role as a research university, pointing out that it is home to more students than Yale, Princeton, and Amherst combined.

She characterized Harvard as a “perfect storm for free inquiry.”

“We are all teachers and we are all learners,” Faust said.

Dingman chose to talk about the diversity of students in the incoming class, reciting the poem “Psalm” by Polish Nobel laureate Wislawa Szymborska.

“You hail literally from all corners of the globe, and we are stronger as an institution because of that fact,” Dingman said.

Freshmen also heard from Theresa Cheng ’08, who encouraged them to be “emboldened by success and inspired by failures.”

She described her track at Harvard, where she came in expecting to pursue a career in law but has since developed a passion for biology.

“Maybe that casual interest will turn into a passion—or even a career,” Cheng said.

The speeches hit many lighter notes as administrators made jokes to relax the atmosphere.

“How many Yale men does it take to replace a lightbulb?” asked Pilbeam, who has taught at Yale University. “None. New Haven is much nicer in the dark.”

Pilbeam also reassured students that a C on a test would not be the end of their career.

“Don’t worry; you could still go on to become president. Maybe not of Harvard, but of the United States,” he quipped.

Freshman Molly E. O’Laughlin said she was pleasantly surprised by how “funny” the speakers were and by how “rousing” the event was overall.

And just like many Harvard commencements, the threat of rain forced administrators to move the event indoors. While many freshmen and parents were able to pack into Sanders Theatre to hear the speakers, others had to watch it on screens in the Science Center.

—Staff writer Claire M. Guehenno can be reached at guehenno@fas.harvard.edu.