Stadium draws 18,898 for first contest under the lights 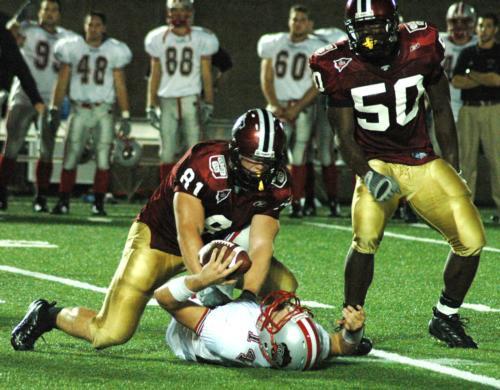 Captain Brad Bagdis and the Harvard defense had a solid second half, shutting out the Bears offense after 17 first-half points.
By Malcom A. Glenn, Crimson Staff Writer

It wasn’t the prettiest performance to showcase for the first night game in the 104-year history of Harvard Stadium, but it was good enough for a win for the home team.

A shootout through the first two quarters turned into a defensive struggle in the second half, with the Crimson (1-1, 1-0 Ivy) holding on for a 24-17 win over Brown (1-1, 0-1 Ivy) in front of an unusually packed crowd under the lights at Harvard Stadium on Saturday night.

The first night game in Crimson history wasn’t short on excitement or atmosphere—or scoring, early on—but in the end, the 18,898 fans in attendance were treated to what both head coaches called a “typical” Harvard-Brown game.

Typical, indeed, in that the win is the eighth straight by the Crimson over the Bears. This year’s edition featured a total of six turnovers, an inability to run the ball with success on either side, and a bevy of late opportunities that Brown was unable to capitalize on.

“We had an opportunity, and then we shot ourselves in the foot a couple of times,” Bears coach Phil Estes said.

The best of those opportunities came in the fourth quarter, with Harvard clinging to a 21-17 lead and Brown having driven into Crimson territory. On a third-and-long form the Harvard 26-yard line, captain Brag Bagdis’ pressure on Bears quarterback Michael Dougherty forced an ill-advised throw that was intercepted by senior cornerback Steven Williams.

Four plays later, however, the Crimson gave the ball back on a fumbled handoff, but Brown came up short again, this time on a missed 41-yard field goal.

“We started to get the upper hand and move the ball, then we’d leave it on the ground there, and it goes right back the other way,” Harvard coach Tim Murphy said. “It was a rollercoaster type of game.”

Harvard followed with a 15-play, clock-eating drive that resulted in a 23-yard field goal and increased its lead to seven. The Crimson converted its first three third first downs on the drive, including a key swing pass to Noah Van Niel that the senior fullback advanced past the sticks with a big second effort.

“I knew that we needed to get the first down—I knew where the sticks were,” he said. “I was lucky enough to get the ball thrown my way in the flat and I just turned and tried to…keep the legs moving until the ride’s over.”

The Bears offense got the ball back down a score with 3:07 to play, but two Dougherty interceptions in the final 2:11 of the game—one by Williams and another in the waning minutes by sophomore Derrick Barker—sealed the outcome.

“Derrick Barker had a rough first half, but then he stepped it up in the second half, and they realized they couldn’t pick on him anymore,” Williams said. “Our safeties were flying all over the place...I was, unfortunately, the weakest link, and I just had a few lucky tosses my way.”

The tosses of senior quarterback Liam O’Hagan worked for Harvard early. The Crimson took a 7-0 lead on its first drive of the game, culminating in a 21-yard strike from O’Hagan to senior wideout Corey Mazza just 3:22 in. Mazza finished the game with nine catches for 130 yards.

But Brown wideout Peter Raymond answered with a 63-yard touchdown catch and run near the end of the first quarter. O’Hagan found sophomore Matt Luft with a perfect pass in the back of the endzone a few minutes later, and the Bears responded on a scoring drive seven minutes later to knot the score at 14.

After Brown took a 17-14 lead with 1:52 remaining in the half, the ensuing kickoff return shifted the momentum back into Harvard’s favor heading into halftime.

”That kickoff return was unbelievable,” O’Hagan said of junior cornerback Andrew Berry’s 40-yard return that set up another Crimson touchdown.

O’Hagan found Mazza on a 41-yard pass on the next play, giving Harvard a first-and-goal at the five. Three plays later, O’Hagan scored from a yard out to give the Crimson a lead it would never give back.

“It showed a lot of character, that drive,” Murphy said. “It sent them into the locker room with a little different feeling than they had a few minutes before.”

But all was not well for O’Hagan. He left the game after sustaining a big hit on a scramble in the third quarter, finishing his evening 19-of-29 for 200 yards with three touchdowns (two passing, one rushing) and zero interceptions for the second straight week.

“I took off and ran, and saw the middle of the field wide open, and I wasn’t wise enough to slide on that play, which I should have,” O’Hagan said. “I got my bell rung a little bit.”

Senior backup Chris Pizzotti finished the game behind center, and after throwing an interception on his very first pass, he settled down to the tune of 10-of-16 for 101 yards. O’Hagan is expected to start next week at Lehigh.

“It might not look like it, but I felt real comfortable going in right from the start,” Pizzotti said.

The running game, on the other hand, looked uncomfortable all night. Sophomore Cheng Ho managed just 19 yards on 10 carries, while freshman Gino Gordon fared no better, gaining 18 yards on eight attempts. While Murphy admitted that the running game still has some kinks to be worked out, it wasn’t enough to prevent a Crimson win on the historic night.

“Obviously, I’m very proud of our kids,” Murphy said. “It was a typical Harvard-Brown football game: very hard-fought, a lot of swings in momentum, and we did just enough to finish the game and get the win.”