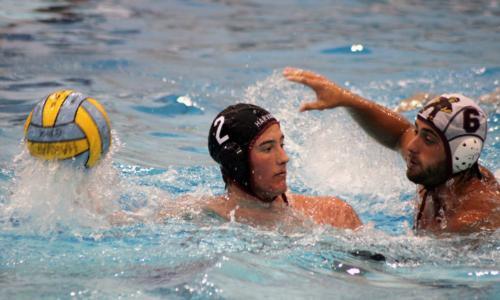 Junior Egen Atkinson is just one piece of a multifaceted Harvard offensive attack. Atkinson is second on the men’s water polo team with eight goals, including four against No. 20 Cal Baptist on Sept. 14. By Thomas J. Beckford
By Max N. Brondfield, Crimson Staff Writer

As the calendar turns to October, many begin looking ahead to Halloween and the promise of endless treats. But, for Harvard men’s water polo, revenge against the Brown Bears might be even sweeter.

The Crimson (2-4) returns to action tonight against the Bears at 7 p.m. in Blodgett Pool after spending the past week recovering from a difficult sweep in the ECAC Championships. Brown (5-5) was among the teams to hand Harvard a tournament loss, but the 14-6 defeat served as tremendous motivation for the young Crimson squad.

“We still have a bitter taste in our mouth from the tournament,” senior co-captain Jay Connolly said. “This is a huge game for us and we’re looking forward to getting back into action.”

The rivalry with Brown has been a thorn in Harvard’s side–the Crimson has gone 1-6 against the Bears over the last three years, including consecutive losses in the Northern Championships in 2006 and 2007.

Still, tonight’s hosts have reason to be optimistic.

During regular season play, Harvard amassed a 4-1 record at home last season and, as is typical with a very young squad, the Crimson has looked more and more comfortable with each game at Blodgett.

“We’re very focused in practice,” Connolly explained. “We’re working on overall awareness, not watching teammates’ shots and getting back on defense.”

Harvard could certainly benefit from a solid defensive effort, as Brown brings a forceful attack to the pool. While Connolly has shined in goal, logging ten saves in the last contest against the Bears, he cannot stifle the opposition himself.

The potent Brown offense relies heavily on sophomore Gordon Hood, who haunted the Crimson with a hat trick ten days ago. The visitors have averaged a healthy 10.5 goals per game this season and bring an impressive a three-game winning streak to Cambridge.

“They have a great two-meter offensive player,” explained senior co-captain David Tune, referencing Hood’s early season performance. “We have a special defense prepared to deal with him.”

However, even with the concern of the Bears’ offense, Tune noted that the team’s concentration has been more internal.

“We’ve got to focus on playing our game,” said the Crimson’s leading goal scorer. “We’re focusing on transition and getting a good counter attack.”

Indeed, in this consistently competitive rivalry, underestimating Harvard’s offense could prove costly for Brown. The Crimson has quietly averaged over nine goals per game, drawing both on standout performances and tremendous depth. While Tune has notched an outstanding 15 goals through six games, followed by junior Egen Atkinson with eight, three quarters of the Harvard roster has found the back of the net, as 15 different players have carved their names onto the stat sheet.

Considering the bountiful sources of scoring at its disposal, the Crimson can feel optimistic despite its underdog status on paper. On a team with only two seniors, the imminent emergence of so many young offensive threats bodes well not only for the contest against the Bears, but also for the remainder of the ECAC season.

Still, Tune cautioned against looking too far ahead.

“Every game is completely different,” the co-captain insisted. “This is about the rivalry with Brown. We want to go out there and show them we came to win.”

While the bitterness between the rival squads makes every matchup compelling, Connolly noted that a victory over the Bears tonight could prove especially satisfactory after Harvard’s recent tournament struggles.

“Brown beat [No. 11] St. Francis last week,” the goalkeeper said. “If we can beat [the Bears], we can compete with any eastern team.”

While the Crimson hesitates to look beyond the game in front of it, an outstanding effort against Brown could spread some pre-Halloween fright through the rest of the league.