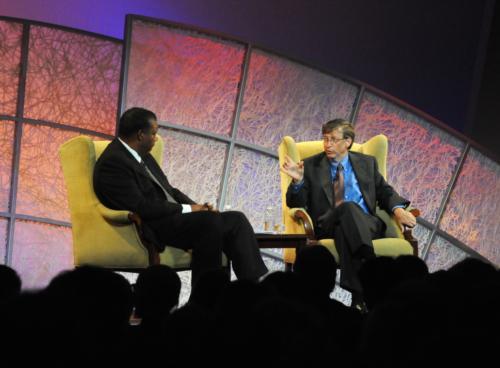 A 100 years ago, Harvard Business School opened its doors with the intention of training the next generation of business and financial leaders in the wake of the Panic of 1907 when bank runs brought the financial system to a standstill.

This weekend, business leaders from around the world—including Bill Gates, the former CEO of Ebay, and the former Chairman of the Securities and Exchange Commission—gathered at the Global Business Summit in the midst of the current financial crisis to discuss the evolving role of the leader in the non-profit, government, and for-profit sectors.

The two-day summit marks the culmination of a year-long celebration of the Business School’s centennial.

HBS professor Niall Ferguson, who was one of the two keynote speakers of the Global Business Summit, told the crowd of nearly 2,000 that the Business School has led the way in arming students with the outlook to be leaders.

“A leader needs to understand the process of creative destruction,” said Ferguson, evoking Joseph Schumpter’s principle of creative destruction, which notes that long term economic growth comes from the destruction of the value of established companies through market innovation and fluctuation. “HBS, more than any other institution, has sought to illuminate, elucidate, and, above all, communicate this principle.”

Throughout the day, speakers and panelists spoke about different aspects of leadership, from creating a vision to consensus building.

Charlie Rose moderated a panel with the winners of the 2008 HBS Alumni Achievement Award on the topic of improving financial and political leadership in the 21st century.

“Leaders around the world need to stand up, speak the truth, and inspire confidence in people that we will get out of this situation,” said former Ebay CEO Meg Whitman, who received one of the achievement awards.

Jeff Immelt, CEO of General Electric and another award winner, said that two immediate problems facing political leaders were stopping the precipitious decline in housing prices and freeing up credit markets by getting banks lending again.

“Trying to solve the liquidity and unemployment problems at the same time is difficult, if not impossible,” Immelt said. “You have to do the former first.”

Another problem facing Washington is to bring the federal debt in line, said James D. Wolfensohn, former President of the World Bank.

“There is no future for our country if we don’t stop spending more than we are,” he said.

As for training the next generation of leaders, Anand G. Mahindra ’77, Vice-Chairman of Mahindra & Mahindra Ltd., said that business schools were not necessarily the answer.

“The real strength of the American educational system is not at professional schools, but across the river, so to speak,” Mahindra said, referring to the College. “Future leaders need a flexible mind, and for that, you need training in the liberal arts.”

Bill Gates, the other keynote speaker of the summit, emphasized that American business leaders should use their innovative skills to better understand the plight of the indigent, including the state of American education and global health.

Gates noted that his efforts to create national education standards through the Bill and Melinda Gates Foundational were being stymied by opposition from members of both political parties.

“The Republicans don’t like ‘national,’ and the Democrats don’t like ‘standards,’” Gates said. “As a result, the most basic improvement we could make to American education can’t go forward.”

“People who need medicine for malaria have no money and hence no voice in the marketplace,” Gates said. “Drug companies spend 10 times as much money on male baldness products as they do on malaria drugs.”

Gates said that bad health care represented the start of a reinforcing cyclical trap that hurt the economy, which in turn damaged the education system and thereafter affected the performance level of governance.

Poor infrastructure as a result of poor governance made the health care situation worse, thus restarting the cycle.

In an interview after a panel about the partnership between government and business, former chairman of the Securities and Exchange Commission William H. Donaldson spoke about two regulations he viewed as absolutely necessary in the aftermath of the financial crisis: regulating the credit rating agencies—which he said didn’t pay enough attention to liquidity standards—and regulating exchanges of swaps and other derivatives, assets whose value is based on the value of other assets.

According to Donaldson, the derivative market requires a clearinghouse that would record and clear transactions, thus leading to greater transparency and accountability.

As for job prospects for undergraduates, Donaldson was subdued but relatively optimistic.

“Out of chaos comes opportunity,” he said. “There’s going to be a lot of dislocation as a result of this crisis, and this will lead to opportunities to learn and have an impact. There will probably be lower paying jobs, but that’s not necessarily a bad thing.”

“For now, jobs will be tougher to come by and profit margins will certainly be lower,” Donaldson continued, “but the system of financial intermediaries will not disappear.”

—Staff writer Prateek Kumar can be reached at kumar@fas.harvard.edu.