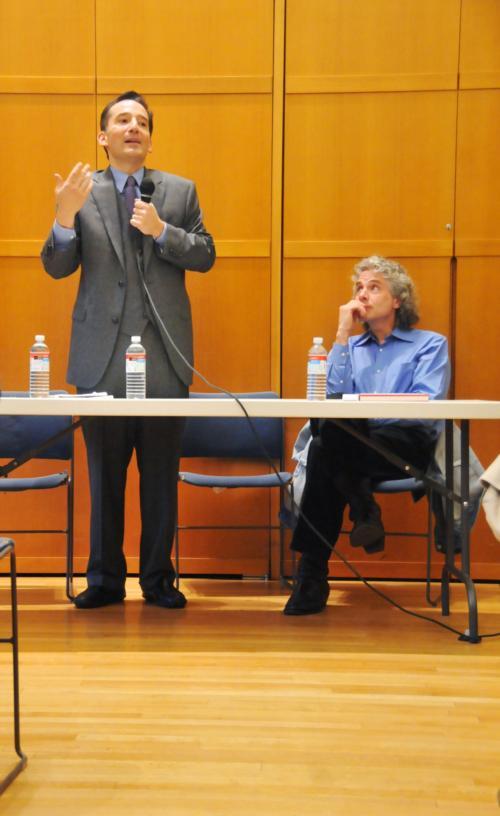 The discussion, which focused on questions of morality and whether altruism can exist without faith, was cosponsored by Hillel and the Harvard Book Store to promote Wolpe’s new book, “Why Faith Matters.”

Wolpe—named the number one pulpit rabbi in America by Newsweek earlier this year—and Pinker—an avowed atheist and best-selling author of books on the human mind and language—passed a microphone back and forth, engaging in an enthusiastic conversation without a moderator.

“If you’re going to hang yourself, you should do it from a high tree,” joked Wolpe about speaking alongside Pinker.

The California-based rabbi launched the discussion of morality by asking Pinker why individuals would tip waiters without the moral dictates of religion.

“If there is no God, and the basis of kindness is evolutionary development, what does it really matter if I don’t leave a tip?” Wolpe asked Pinker.

Pinker addressed the issue of generosity from a psychological standpoint.

He explained that people are altruistic for three reasons: because they want others to reciprocate, because others’ judgements pressure them, and because they must commit to moral principles to win others’ trust.

Despite the spirited debate, neither budged from his original position, and the discussion remained congenial.

An hour into the conversation, the audience—a diverse mix of Harvard students and area residents—was invited to ask questions of the two.

One audience member pushed Wolpe to explain his belief in God.

“Not all the rhetoric of scientific intimacy begins to capture what is another human being,” Wolpe said.

Another question focused on how Pinker could believe in a “greater good” without faith.

“There can be a greater good in the same way that there are mathematical truths,” Pinker said. “I believe in morality. I just don’t see what morality has to do with God.”

After the debate, Wolpe stayed behind to sell and sign copies of his new book.

“I wouldn’t say I agreed with either of them,” said audience member Benjamin A. Lerner ’11. “I thought Professor Pinker’s arguments were a little more precise.”

Though no conclusion was reached, the debate did spur discussion of rarely-broached topics.

“The soul as a separate entity from the body is something that not too many people outside religious circles speak about these days,” Wolpe said.