Putting Art to the Task 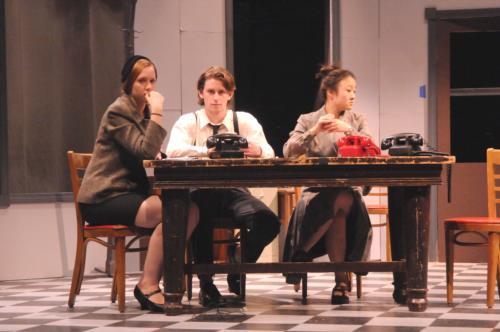 Over one year ago, University President Drew G. Faust christened the New College Theatre, prefacing the venue’s first performance in the new space with a grand announcement. Framed by the proscenium arch and backed by a billowing red curtain, Faust joyfully declared the formation of a “Task Force for the Arts” before introducing the play to come.

“It is my hope,” Faust said at the time, “that the Task Force will complete the bulk of its work during the 2007-08 academic year, with a final report to be submitted by the early fall of 2008.”

“This marks a new beginning for a new era of arts at Harvard,” Faust declared.

“Things are happening, with the opening of New College Theatre and the Task Force on the Arts,” Martin Puchner said shortly after the Task Force was announced. Puchner, a professor of comparative literature at Columbia University, spent last year at Harvard, where he received his master’s degree. “This seems like an exciting time for the arts in general,” he said.

With the winter of 2008 now rapidly approaching, members of the Task Force maintain that their first report is forthcoming. No specific date for its release has yet been set.

Until it is published, the exact contents of the Task Force’s report will remain a mystery to students and other members of the Harvard arts community. While the Task Force has taken into account peer institutions, past Harvard reforms, and student opinions, all that can be certain at this point is that, like all institutional reforms at Harvard, the implementation of Task Force’s findings will take time.

English professor and Task Force head Stephen J. Greenblatt and several other members declined to offer details on the their unreleased report, but English professor and Humanities Center Director Homi K. Bhabha, who is also a member of the Task Force, said the results of their investigation would be based on an examination of peer institutions’ arts programs, student input, and previous arts initiatives at Harvard.

“We’ve been looking closely at how the arts play a role at other institutions, such as Yale and Princeton,” he says.

Last April, several members of the Task Force took a field trip to Yale, touring the university’s artistic spaces and meeting with various deans, according to the Yale Daily News.

Greenblatt, a Yale alum, was reportedly impressed with his visit. “Yale has for a long time had a very deep and serious engagement with the arts,” he told the Yale Daily News in April. “It is a model for how a university can take arts-making seriously.”

Besides finding inspiration by looking at other universities, the Task Force has also tapped into these institutions’ human talent.

“We’ve brought in consultants from various artistic organizations,” Bhabha says. Experts from theater groups and museums have briefed the Task Force on how their organizations operate, helping the group better understand how other universities incorporate and support their arts communities.

LOOKING TO THE PAST

In addition to exploring how other universities have dealt with encouraging the arts on campus, the Task Force has also examined Harvard’s own artistic heritage. Previous initiatives have shown that, at Harvard, such changes require time.

“We’re tying to find all the best practices,” Bhabha says, acknowledging that the Task Force has been taking cues from restructuring successes in Harvard’s artistic past.

The Committee on the Visual Arts provided one such paradigm, according to Bhabha. In her original mission statement for the Task Force, Faust acknowledged this, explaining that the Committee on the Visual Arts was formed when “Harvard began explicitly to explore its traditionally uneasy relationship to the arts, acknowledging that the University had long viewed the practice of the arts as most appropriately located outside the curriculum.”

In April 1956, the Committee produced the Brown Report, nearly two years after its creation by President Nathan M. Pusey ’28. Just like the current Task Force on the Arts, the Committee investigated the role of the arts in other college curriculums.

Once published, the Report set off a number of college reforms which ranged from symbolic (changing the Department of Fine Arts to the Department of History of Art and Architecture) to groundbreaking, with the creation of a concentration explicitly for the study of design. Ultimately, the Committee’s reforms impacted the College and its relationship to the arts, but their implementation also took a great deal of time. It took 42 years for the Department of Fine Arts to change its name and 12 for the Visual and Environmental Studies department to be granted concentration status. While today’s Task Force will benefit from the example of the Brown Report, current students are unlikely to reap the benefits of its findings before they graduate.

Trevor J. Martin ’10, a VES concentrator and member of the Harvard College Art Society, is well aware of this fact. “It’s sad, but also really nice to know that I’ll visit the University and see how these initiatives have moved forward,” he says.

Though they may not directly experience the Task Force’s reforms, current Harvard students have been able to express what they hope the future holds for the arts at Harvard. Some are optimistic that the present Task Force will advance the institutionalization of the arts initiated by the 1954 committee. From publications like the Harvard Advocate to musical groups such as the Harvard-Radcliffe Orchestra, many artistic student organizations still remain separate legal entities from the College.

Such independence for student groups has been both a curse and a blessing. “Theater can’t be studied in quite the same way as other art forms,” Allison B. Kline ’09, president of the Harvard-Radcliffe Dramatic Club, says. “You wouldn’t want to see it become something that’s simply theoretical and exam-focused. Acting is really about production and experience.”

Striking a balance between instructional and experiential learning has proven a challenge for both performance and the visual arts. Harvard College has always stayed away from pre-professional tracks, but young artists today will be graduating and trying to make it in a competitive world. The VES department serves as an example to students in other disciplines as a model of how artistic practice can be incorporated into a liberal arts curriculum. Music students, for instance, also feel that a balance must be struck between academic learning and performance training.

“I think the Task Force must address what Harvard’s goals are,” Tines says. “We will forever be a liberal arts school, but what does ‘the liberal arts’ mean? It’s the difference between the what and the how. What does the art form mean in the world? What is it supposed to do for us?”

Martin suggests that a master’s degree program would greatly benefit both VES concentrators and university at large.

“That kind of exposure to someone who is dealing with the issues of emerging into the art world and has created a significant body of work would benefit and motivate the student body enormously,” he says.

Kline believes that the curricular aspects of the dramatic arts could also be more completely developed. “There is a lot of really incredible theater history and thinking about aesthetics and performance that go beyond the scope of the English department, or the few courses offered by the Dramatic Arts [committee],” she says.

Many students say they are hopeful that the Task Force will discover useful areas of reform and improvement in the arts at Harvard. Still, many have not been contacted, and remain in the dark.

“I was not contacted directly by the Task force,” Tines says, “which really kind of scares me. I’m involved in the HRO, Collegium Musicum, and an a capella group, which is a pretty large cross-section of music.”

“That’s a very serious charge, but I honestly have not heard it until now,” Bhabha responded when asked about such student sentiments. “We’ve done a great deal to open a dialogue with students.” Bhabha cites the Task Force’s open-invitation meetings, as well as its willingness to accept students comments and ideas.

Based on what little he can divulge of the current Task Force’s findings, Bhaba describes three main divergences from the Brown Report. Rather than further sequestering artistic study to its own department, he expresses the importance of breaking down departmental divides to allow artists access to all Harvard has to offer.

Bhabha also stressed the importance of looking at art as a dialogue across cultures, an exchange currently lacking on Harvard’s campus.

“We are looking at concerns of internationality and interdisciplinarity,” he says. “Art is now a universal language.”

Finally, Bhabha emphasizes the new importance of technology in the arts, citing the rise of Adobe Photoshop and other computer media-editing software. As such, the Task Force has also been considering how best to integrate such emergent advances into the curriculum, Bhabha says.

Bhabha’s comments are only a glimpse into the much more detailed report that the Task Force will eventually release. When findings will be made public and how they will be carried out is still unknown. And while the interim period between the Task Force’s announcement and the release of its findings may seem to suggest stagnation, Bhabaha noted that Faust’s enthusiasm for the arts is unprecedented in Mass. Hall.

“From the beginning of her presidency, Faust has made the arts a major concern,” he said.

Such support may speed up some of the processes that took the Brown Report’s suggestion so long to implement. Still, barriers remain. According to Bhabha, the current economic crisis will influence the implementation of any concrete plans.

One year after Faust’s announcement, the Task Force is still in its incipient stages. In essence, this is an exercise in waiting: Harvard students must wait for the report to be released, but more importantly, they must be prepared to wait, probably many years, for the changes that the report will suggest.