Out of Town News set to decline lease renewal 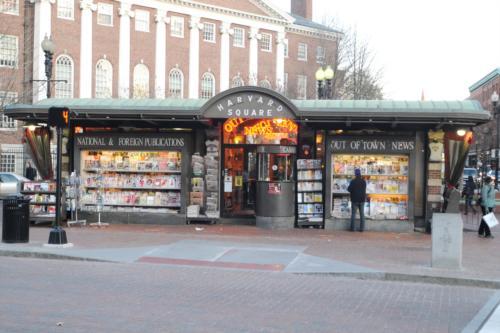 The decline of print media is driving the current tenants of Out of Town News literally out of town.

The lease for Out of Town News, a newsstand known for selling a variety of U.S. and international newspapers and magazines, is set to expire on Nov. 30. Hudson News—which is currently renting the city-owned newsstand—has indicated that it will not renew its five-year lease, and no new lessee has been found, City Manager Robert W. Healy said at Monday’s Cambridge City Council meeting.

“The city has every right to get a reasonable rent for that property,” Councillor Sam Seidel said. “But the newspaper business is changing.”

The City Manager’s office will now begin soliciting bids from new lessees, but according to Healy, Hudson News will not be among them.

In the meantime, the Council authorized Healy to modify the property’s current rent in order to avoid leaving the building empty during the search for a new permanent lessee.

Few Cambridge residents were aware of the kiosk’s impending close—not even Kallal Varua, the general manager of Out of Town News.

Varua said in an interview that while the newsstand had many problems, he believed Hudson News was going to renew its lease.

The increased online availability of foreign newspapers, combined with rising magazine prices and recent construction blocking access to the kiosk, have decreased demand for the newsstand’s wares, Varua said.

Varua also cited problems with the Out of Town building, where eight to nine employees work.

“When you wake up in the morning, you see a cracked window,” he said. “Only one panel is working for the electric lights, the heat isn’t working, all the pictures around the store are falling apart.”

Despite these difficulties, some Cambridge residents say they would sorely miss Out of Town News if it closed.

“Every Saturday I get papers here that I cannot get anywhere else,” resident Robert Brimmer said after buying a New York Times at the kiosk yesterday. “This is terrible.”

“Oh no, please not another one,” Phillip W.D. Martin said upon learning that the kiosk is likely to close. Martin, a journalist and former Nieman Fellow who has lived in Cambridge since 1979, said he buys papers from Out of Town News twice a week.

But some students like Kelly J. Warren ’11, who said she reads her news online, were less concerned about the possibility of the newsstand’s demise.

Warren said she only used the newsstand as a landmark for meeting up with clubs or other groups.

The kiosk was built in 1928 as a shelter for the Harvard Square stop of the Boston Elevated Railway and is on the national register of historic buildings. The structure was restored and reopened as a newsstand 1984 after the Red Line was extended beyond Harvard Square. Because of its special status, any major renovation would be “a state issue,” Healy said at Monday’s meeting.

The property will continue to be leased as a newsstand that provides “a diverse array of news material,” Healy said at the meeting.

Hudson News could not be reached for comment before press time.

—Staff writer Sarah J. Howland can be reached at showland@fas.harvard.edu.