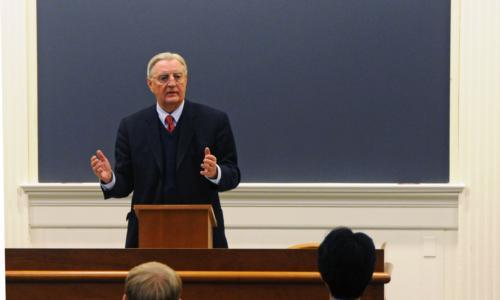 Former Democratic presidential candidate Walter Mondale called the 2008 election a historic occasion and expressed wonder at the electoral coalition behind Barack Obama during a speech hosted yesterday by the Harvard Democrats.

“It was the young America, the new America, that voted for Obama,” Mondale said in his 20-minute address.

He noted that wealthy Americans overwhelmingly supported Obama, saying, “It’s a stunning thing to run a campaign about raising taxes on rich people. And then they vote on it. That was not my experience.”

Mondale voiced his support for the president-elect, saying that Obama understands how to handle American foreign policy and that “one of his great strengths is his ability to articulate and explain in a way that the public can follow.”

Mondale addressed many issues Obama will face, but said that the most dangerous was “whether we have a government who believes it has to answer the law, or do we have a continuation of the imperial presidency.”

When asked what advice he would give Obama, Mondale suggested he follow the example of former president Jimmy Carter, whom Mondale served as vice-president.

“Carter and I obeyed the law and kept the peace,” said Mondale. “[President George W.] Bush tried the opposite policy, and I think it was a disaster.”

Mondale also emphasized the importance of prioritizing integrity over political gain, noting that Carter’s decision to grant amnesty to Cuban immigrants in 1980 was “the right decision from a human standpoint but, politically, it didn’t help.”

Mondale’s talk was followed by 30 minutes of questions. When asked about media comparisons between Republican vice-presidential nominee Sarah Palin and Geraldine Ferraro, Mondale’s former running mate, Mondale said he thought the biggest difference was that Ferraro was qualified.

He said he hoped that the public would “just forget about Palin” and give women in politics another chance.

About 30 students attended the talk and welcomed the Democratic politician with a standing ovation. After the talk, the audience seemed to have had their high expectations met, calling Mondale “an idol” and “inspirational.”

Harvard Democrats event organizer Jonathan P. Hawley ’10 said Mondale was invited to speak because, “at a time when politics is so often burdened with bitterness and petty squabbling, it’s refreshing to be reminded of people like Mondale who have always followed their beliefs and put the people first.”