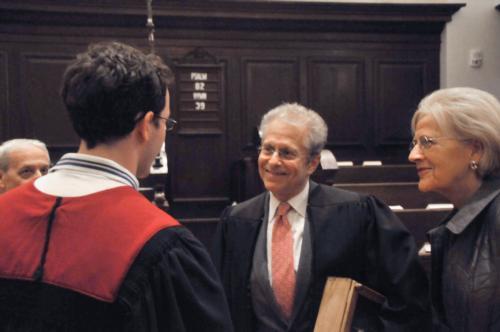 On the eve of today’s presidential election, Professor Laurence H. Tribe ’62 spoke fondly once more of his former student Barack Obama and his “audacity of hope” for the country in his morning prayers in Memorial Church’s Appleton Chapel.

“There are those in whom challenge stirs greatness, those who rise to challenge rather than letting it break their stride or spin their compass,” said Tribe about Obama, the Democratic presidential candidate, whom he called “the most impressive and talented of the thousands of students I have been privileged to teach in nearly 40 years on the Harvard faculty.”

While Tribe lauded Obama’s achievements and noted that his campaign appeared to be “on the verge of triumph against astonishing odds,” he reminded listeners that the election was “by no means a foregone conclusion given the so-called ‘Bradley effect’ and the efforts at voter suppression in so many parts of this country.”

Tribe also emphasized the challenges that Obama would face should he win today’s election—“problems of such staggering complexity that they dwarf those confronted by any president since FDR in 1932,” which he said included “our economy in meltdown, our military stretched to the breaking point, the power of our example in the world at a nadir, our environment and our politics poisoned, our Constitution threatened, and our trust betrayed.”

Despite his avowed disappointment in the conduct of the American government in recent years—specifically regarding its use of torture—Tribe concluded his remarks with a sentimental evocation of his pride in becoming a naturalized American citizen, and his respect for the Constitution that “guarantees our freedom to challenge the practices that bring us shame—and to vote for a changed government.”

Tribe was born in Shanghai several months before the Pearl Harbor attacks in 1941, and his father, an American citizen, was imprisoned in a concentration camp during the Japanese occupation of China. The family later immigrated to the United States and settled in San Francisco.

In a symbolic “wordless prayer,” Tribe presented one of his “proudest possessions”—an American flag smuggled into the internment camp by his mother for his father, who died in 1980.

“I can think of no more fitting way to conclude than to show you that flag as I urge you to exercise your right to vote tomorrow...a right for which many who fought under this flag gave their lives,” said Tribe.

While Tribe’s political remarks may have seemed slightly out of place—one listener joked that “there wasn’t very much God in there,” and Tribe offered his “apologies to the separation of church and state”—attendees noted that there was no such thing as a “typical speaker” or a “typical subject,” and that views from across the political and religious spectrum are often highlighted.

“The great multiplicity of subjects exposes certain aspects of religion that go beyond any cult, such as justice and caring,” said Reverend Douglas Bond, who regularly attends the morning prayers. “It’s not unusual for someone to make remarks with political orientations.”