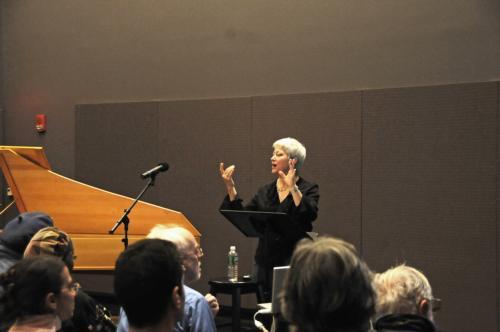 Opera is a vocally-driven performing art. But this past Tuesday, Ellen Hargis—a “Baroque-music diva” according to The New Yorker—proved that sleight of hand can improve even the most skilled voices. During a lecture and masterclass hosted by the Office for the Arts (OFA) at the New College Theatre (NCT), soprano Hargis demonstrated the importance of performance gestures.

“Ellen Hargis is an extraordinary resource for Baroque vocal music,” said Thomas Lee, Program Manager for the OFA’s Learning From Performers series. “She is both passionate and knowledgeable as a singer as well as a teacher to students such as these.”

Hargis spoke about Baroque performance practices in opera, and concentrated specifically on the physical gestures used in that period, working with cast members from the Harvard Early Music Society’s presentation of Francesco Cavalli’s opera “L’Ormindo.”

Hargis compared Baroque music and its practice to Baroque art, stating that she often finds inspiration for her characters by looking at art from the period. She showed photographs of sculptures by Bernini, as well as paintings by Rubens and Watteau, pointing out the serpentine curves of their bodies and the grace and poise of each pose.

Through excerpts of commentaries from as far back as the 17th century, Hargis discussed the importance of asymmetry in Baroque performance practice and used examples from the “handbooks” of the time, including “Chirologia: or the Natural Language of the Hand” and “Chironomia: or the Art of Manual Rhetoric.” Both of these volumes dealt with the significance of minute hand gestures, details which would have been noticed by almost all 17th century audiences.

When asked about the importance of these subtle hand gestures in a contemporary performance, Hargis said, “The bigger issues of asymmetry and serpentine curves in Baroque performance practice are still helpful to the understanding of this music in the 21st century, even if the smaller subtleties are lost. Sometimes these principles and subtleties will enhance the playing of a character, but sometimes it won’t, which is when—even in a period performance—it seems frivolous to stay true to the Baroque practice.”

After the conclusion of the lecture, Hargis held a masterclass featuring cast members of “L’Ormindo,” which will run from Nov. 13 to Nov. 16 at the NCT.

“The production of ‘L’Ormindo’ uses a wider palette than just Baroque performance practices, although we will stay true by using serpentine curves, and a wide array of dance origins,” said director Roy A. Kimmey ’09. “There are often sharp shifts in emotion throughout the music of this opera, and we want the gestures to point out these rhetorical changes in the music.”

Keeping the thoughts of the director in mind, Hargis worked with six members of the cast on using more Baroque performance practices in their interpretations of the music, helping the character of Sicle (Lisa A. Lynch), on using her gestures more effectively. Because Sicle’s piece is a combination of an aria (a more melodic song) and recitative (a sung narrative) it requires more sudden changes in gestures and facial expressions.

Hargis also worked with the character of Erisbe (Felicia Plunkett) on her two duets: one with the title character, Ormindo (Jay Smith) and the other featuring Erisbe’s husband, Amida (James B. Onstad ’09). In these duets, Hargis pointed out that in Baroque performance practice, the two characters did not need to look at each other throughout the entire scene. Thus, when their lyrics seem to be an aside, they can look out to the audience so their corresponding gestures will be more visible.

At the conclusion of the masterclass, Kimmey and Matthew Hall ’09, Music Directors of “L’Ormindo,” were both very pleased with the new performance practices implemented by Hargis. With these new moves, the production of “L’Ormindo” will be closer to the original Baroque essence of the opera.

“Often there is an aesthetic to period performances, almost a white noise, where the emotions and practices of the period are not directly related to the performance.” Hargis said. “By reducing this white noise, or dissonance, through the interaction of the sister arts of musical and physical gestures, audiences can better understand the emotional message of Baroque music.”