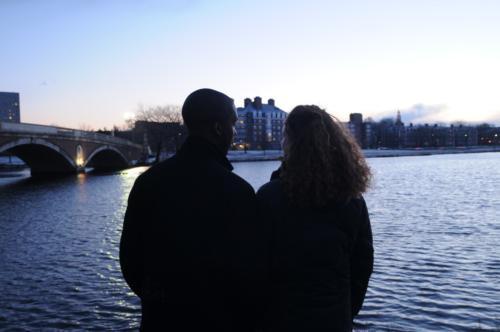 Tope Lanre-Amos ’09, fresh out of an all-girls high school, came to Harvard with great expectations. Besides looking forward to
By Sarah B. Schechter

Tope Lanre-Amos ’09, fresh out of an all-girls high school, came to Harvard with great expectations. Besides looking forward to living in the historic freshman yard and taking classes with renowned professors, Lanre-Amos had boys on her brain.

Lanre-Amos walked into Matthews Hall in the fall of 2005 not knowing what the future might hold. The first night of freshman week, she met Simon A. Gawlik ’09, another freshman in her entryway. The sparks flew.

After less than a month of school, Lanre-Amos and Gawlik began dating. By November, it was official. They have been together ever since.

Although Lanre-Amos originally had qualms about diving into such a committed relationship, she quickly got over her reservations.

“He was really sweet and convinced me,” Lanre-Amos says.

Since then, Lanre-Amos and Gawlik have been practically inseparable. Both are on the men’s heavy-weight crew team (Amos is the coxswain). Most nights, they double-bunk. They always try to spend “every spare second” together. This past summer, Lanre-Amos lived with Gawlik’s family in Frankfurt, Germany while working at a lab. Her trip included a two-week stint with his parents even before Gawlik arrived home.

It’s common to hear stories of young Harvard couples such as Gawlik and Lanre-Amos eating breakfast, lunch, and dinner in the same dining hall. These couples take the same classes. They move into each other’s dorm rooms. It even may seem, to the casual observer, as though committed relationships are flourishing at our stereotyped emotional-freeze of a college. But what’s left for everyone else? Answer: A Harvard love scene that seems practically non-existent.

“There isn’t any real dating,” Devon L. MacLaughlin ’09 explains. “Either people are in a couple where they’re basically married and spend all their time together, or they’re just hooking up.”

MacLaughlin’s sentiment is echoed by many.

“Harvard love life seems to be limited to the one-night hook up or the really serious relationship, and there’s no real room for the ‘I like you, let’s go have dinner and see how that works’ interaction,” says Diana E. Solomon ’08.

Solomon has a special rooming situation in Cabot House­—she shares a “fairly large crowded double” with her boyfriend, Matthew T. Valji ’08 (“We did some negotiation with our house master,” Solomon says). But she feels that her own dating experience at Harvard has been drastically different from those of her friends. While Solomon has been in a happy relationship for her four years at school, she believes that most people at Harvard are dissatisfied with their experiences here.

“I have some younger girlfriends who are very frustrated with the fact that they can’t find that middle ground. They don’t necessarily want a committed relationship, but they don’t want to go to final clubs and parties and just hook up.”

Solomon adds that the structure of the Harvard social life isn’t conducive to casual dating.

“There seems to be the smaller parties that are private and revolve around groups of friends, or there are the really big parties where you can barely hear yourself talk and there’s a lot of alcohol,” Solomon says. “It’s not the meet-someone sort of atmosphere that you might even find in a bar.”

Solomon speaks to the extremes of the Harvard dating scene—a scene that leaves students with two options: the commited long-term relationship and the growing phenomenon of the hook -up.

THE HOOK UP GENERATION

According to a March 2007 article in The New York Times, “While studies show that fewer teenagers are having sex, other studies of students at individual universities show that the hookup is the predominant way that students sexually interact.”

While it’s clear that dating has changed since the days when our parents went to college, less obvious are the reasons behind this shift.

But many students believe that the polarity of the Harvard dating scene can be attributed to characteristics of the student population. At an institution where anything besides a type-A personality is non-existent, competition drives action, and working hard for one night of raging is a priority, the idea of fostering “normal” relationships simply cannot percolate.

“I think that Harvard students are busy, so the hook-up thing is definitely on the table,” Brown says. “But Harvard kids are really intense, really committed, so that comes out in the intense relationships.”

As a student in one of these “intense relationships,” Lanre-Amos agrees.

“I just think it’s a by-product of the kind of people that tend to get into Harvard,” she says. “We’re very committed people and once we see that we have so much good stuff, we’re really willing to work on anything that might not be perfect. The mentality of not quitting and being really tenacious is something that people at Harvard have.”

And so, Lanre-Amos and Gawlik are going strong after nearly three years. “We’re so boring, it’s kind of incredible,” she says. “In terms of going on dates and going out, we just do homework together or perhaps watch an episode of ‘Lost’ on DVD.”

But Lanre-Amos is happy with her self-proclaimed “married woman” lifestyle. “It’s nice to have somebody you can always talk to. I know everything down to the little minutia of what’s going on with his life, be it injuries or sleeping patterns or dietary habits of the day.”