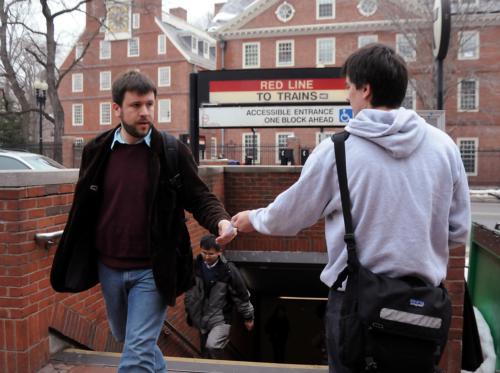 When Amanda M. Nagy ’11 headed to the Greenhouse Café for a quick lunch one day last January, she certainly
By Sarah B. Schechter

When Amanda M. Nagy ’11 headed to the Greenhouse Café for a quick lunch one day last January, she certainly did not expect to be read passages from the Bible over her California rolls. But when approached by two well-dressed strangers, a man and a woman who looked like they could be undergraduates, that is exactly what happened. The pair told Nagy that they were conducting a survey for a class, and although she was in a rush, she consented to help them out. The dogmatic duo asked her if she was familiar with the concept of God as a female figure. When she responded negatively, they pulled out a Bible and began citing passages in defense of their position.

“It became clear fairly quickly that they were not performing any type of study, but were just trying to convince me of this idea of God as a woman,” Nagy recalls. Although Nagy made clear that she wasn’t interested, the pair persisted in their preaching before finally relenting.

Samantha G. Barnard ’09 was also approached in the Science Center by two people claiming to need student input for a class survey.

“They stopped me and asked if I had heard of the gospel that mentioned God the Mother. They asked if I read the Bible, and if I believed in it. When I said no, that I’m not Christian, they started trying to make a case for why I should believe in the Bible,” she recalls.

Religion professor Peter J. Gomes believes that solicitation is not the way to interest students in various religious practices. “Most students don’t discover religion through the history of the school, or the churches in the square,” he said in March 2006. “They discover it either through other students or in the course of their studies.”

Although Harvard Chaplains, the umbrella group for clergy at Harvard, requires all of its members to sign a non-proselytizing agreement, outside groups are not subject to the rules and regulations put forth by the College. So despite this overwhelming sense of negativity towards uninvited preaching amongst even the Divinity School faculty, there is still a strong presence of religious solicitation on campus.

Amanda L. Shapiro ’08, who just stepped down from her role as president of the Harvard Secular Society, notes the conflict involved in restricting religious recruitment while preserving First Amendment rights. “I wouldn’t want to restrict religious solicitors from coming here. I think that restricts freedom of speech, but I do think that maybe there should be some sort of restriction,” she says. “Maybe being in the Yard is a little too much. The Yard has always been this harmonious place and I think it should be free from being bombarded with things you might not want to hear about.”

Danyellé R. M. Thorpe ’11, a member of Harvard Christian Impact, says, “I believe there’s a time and a place. I don’t really think you should single people out in the Science Center. [Religion] is a sensitive subject for a lot of people.”

Nagy agrees that being approached on campus often feels like an invasion of space. “People have the right to say what they want, but they should also respect people’s privacy and leave them alone when they ask to be.”

Sometimes though, it seems that the time is always and the place is everywhere. Plus, the proliferation of religious groups lining the Square cannot only be attributed to evangelicals and feminist Christians. Instead, the large number of proselytizers infiltrating the “Peoples’ Republic” has begun to expand to include newer religions looking for recruits.

Now, for example, a Harvard student en route to Qdoba could actually get a side of Scientology with their burrito. There are rumors of a roving booth manned by people in coordinated outfits peddling books by L. Ron Hubbard, founder of Scientology, inviting students to come learn more about the religion. While they do not approach passersby themselves, the Scientologists are quick to laud their faith to those who show interest. The religion recently became well-known thanks to celebrities like Tom Cruise and John Travolta, but leaves many wary because of its controversial views on a range of topics from anti-depressants to extraterrestrials. Some, however, for the very same reasons, may be curious. For those daring enough to approach them, the Scientology solicitors are more than willing to talk and even claim to be able to help combat some of that second semester stress.

Adam N. Sternthal ’08, was indeed intrigued and decided to approach the group. “They have this meter: you put your hands on it and it starts jumping around,” he explains. “They’ll tell you that you look stressed out, and if you start saying that nothing’s wrong, everything’s all right, they’ll just ask over and over what you’re afraid of.”

Shapiro recalls a similar experience in which she watched the Scientologists measure the stress-levels of curious pedestrians. “If they are [stressed], Scientology has this auditing process that they claim is the only process that can help them,” Shapiro states. “I’m sure that everyone taking the test is stressed. I think that most of their tactics are in your face and exploitative.”

Sternthal adds that the members running the booth have trouble dealing with negative responses or confrontation. “The people that run the thing, they’re like automatons. They don’t know how to deal with [confrontation], so they’re kind of like a broken record, almost brainwashed.”