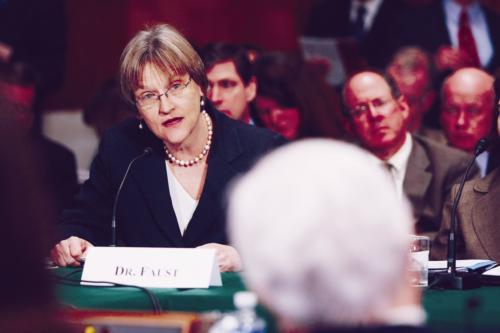 Faust’s testimony capped a Harvard-led effort to reverse a recent real-dollar decline in research grants from the National Institutes of Health (NIH).

Working as part of a larger consortium of universities, Harvard spearheaded the lobbying push, which began with a report and congressional appearances last spring.

Yesterday’s testimony, as well as a second report, ”A Broken Pipeline?,” released at a press conference immediately preceding the hearing, focused on the funding decline’s impact on junior researchers.

“I have come to speak to you because of what I am hearing from post-doctoral fellows and students considering a career in basic research,” Faust said to the committee. “They see a future defined by new limits—not in ideas, energy, intelligence or enthusiasm—but in opportunity.”

Harvard received $329 million in grants from the NIH last year, making it far and away the University’s largest source of federal research dollars.

Congress is currently considering President George W. Bush’s budget proposal, which recommended the same level of NIH funding as the year before, a real-dollar decline once inflation is taken into account.

In her Congressional testimony, Faust pointed to recent advances in biomedical science as evidence of the need for further funding support.

“I feel, as a historian looking at what’s happening in the biological sciences right now, as if we’re in another scientific revolution,” Faust said. “This is a time of such unprecedented possibility.”

Members of the Senate Committees on Health, Education, Labor, and Pensions, which has jurisdiction over NIH, largely expressed support for Faust’s cause.

“It’s a committee that has been very supportive of NIH, so the response was extremely positive,” she said in an interview following the testimony.

A bipartisan group of 15 senators, including Edward M. Kennedy ’54-’56, who chairs the Committee, will soon propose an amendment to raise NIH funding by $2.1 billion—a seven percent increase over the budget for this year, according to a spokesperson for Kennedy.

Similar amendments have proved unsuccessful in recent years, and Kevin Casey, Harvard’s associate vice president for government, community, and public affairs, said that despite the “strong support” of the Senate, White House opposition could stymie Harvard’s efforts, at least in the short term.

“Ultimately, we’re hoping the next president—whoever that might be—will adopt restoring funding for NIH to a reasonable predictable growth path as a priority,” Casey said. “We look for progress to be made, but we don’t look for it to be accomplished overnight.”

Faust shied from making predictions yesterday, but indicated she would continue to follow the issue closely and, if warranted, participate in a similar event next year.

According to information from the NIH Web site, the average age of a researcher receiving his first R01 grant—NIH’s funding mechanism for single projects that accounts for the majority of its grants to Harvard—has risen by nearly 25 percent since 1970.

“There may be a pending crisis here in terms of our future researchers,” said Casey. “The fact that this early in President Faust’s tenure that she would agree to testify before Congress right away demonstrates its high priority. We plan to continue to put this on the front burner.”

The “Broken Pipeline” report consists primarily of anecdotal evidence in the form of interviews with 12 scientists chosen by the participating schools. Harvard selected its interviewees “to exemplify a first-rate researcher...whose grant application thus far had been rated as very high quality but had been stuck in a queue,” according to Casey.

“We thought personalizing it would make a difference,” he said.

In her testimony, Faust cited the 12 scientists’ stories as evidence of the impending “loss and and discouragement of a generation of researchers.”

“The findings are more uniform and obvious than any experiment any of them are likely to do in their careers,” Faust said in her prepared testimony. “If these scholars are struggling, it is clear that as a nation we most certainly have a problem.”

—Staff writer Clifford M. Marks can be reached at cmarks@fas.harvard.edu.