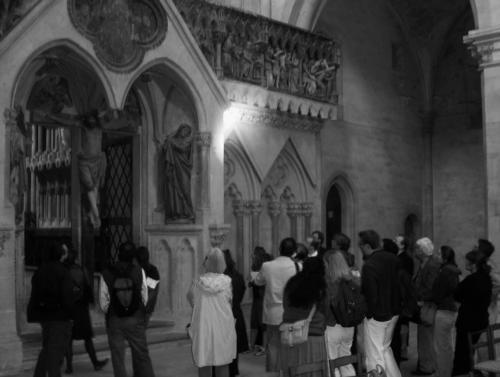 When Julia E. Schlozman ’09 visited Germany with an informally organized History of Art and Architecture (HAA) seminar last summer,
By Sarah B. Schechter

But when the students encountered a relief carving of just such a primate in a small Catholic cathedral in Germany, a conversation on the formal qualities of the carved lewd simian ensued.

“We had to have an academic discussion about it, which was so awkward,” Schlozman says.

Awkward or not, the trip and discussion highlight the way that art can be studied in varying degrees of effectiveness. In the dark of a Harvard classroom, where students view artwork on two-dimensional slides, perhaps no one would have distinguished the monkey amidst the other figures. But when students venture out into the world and experience art in its original form, they often gain entirely new perspectives.

In the past, students in HAA graduate seminars, like Schlozman’s, have traveled abroad extensively, with excursions ranging from Belgium to Austria. Through these crucial research opportunities, students are able to interact with works of art that they may have previously encountered only in photographs.

According to Thomas Batchelder, the undergraduate coordinator of the HAA department, the concentration’s annual budget includes provisions for these graduate excursions.

“It really covers travel, hotels, local travel, and meals...The idea is that funding should not be an obstacle that would keep students from participating,” says Hugo van der Velden, a professor of HAA, who plans to take his fifth graduate trip this year.

Unfortunately, though, opportunities have traditionally been limited for Harvard HAA undergraduate concentrators, unless they were willing to enroll in a graduate-level course, like Schlozman.

But currently, thanks to a private donation, a new initiative targeted at undergraduates is in the works. From now on, HAA concentrators will be encouraged to study abroad. Sophomore concentrators will also have the opportunity to take a new course—HAA 100r—that will culminate in a trip overseas. Katherine L. Blackstock ’10, a current member of the HAA 100r seminar, says that the goal of this year’s course specifically is to “look at how excavations are conducted, and then...look at the relationship between the excavations and architectural studies.”

Faculty in HAA stress the importance of this early access to fieldwork. “Right from the very beginning, they’ll know what it’s like to go out into the field and work with objects,” says Jeffrey F. Hamburger, a HAA professor. “Art historians have to get out to the objects that they study.”

“The undergraduate excursion is about introducing students to the objects. It’s about going out and studying the objects on site,” van der Velden adds. “If you only teach art history from slides, it’s like reading Shakespeare from CliffsNotes. In the end, you have to see the original work to not only appreciate it, but also to understand it.”

Van der Velden, who plans to organize a sophomore excursion to Spain next year, says the focus of the seminar, and therefore the location of the trip, will change annually. Depending on what the class studies—the HAA department teaches on broad artistic subjects from Mesopotamian archaeology to Japanese woodblock prints—students will be able to view works from relevant sites abroad.

This year, the excursion program will take sophomore HAA concentrators to Turkey. Highlights include Ephesos, Troy, and Istanbul, according to the course Web site. The trip will take place during the two weeks between the end of finals period and the beginning of Commencement, and it will expose students to the architectural and excavation sites that they have studied all semester.

Although most Harvard students would kill for an essentially free trip to a foreign country, it’s not simply an easy ride.

“We have to write a research paper due before the trip, and we’re going to be giving presentations at the sites,” says Hannah S. Yohalem ’10, a member of the class.

“Much more is expected of you intellectually,” says Schlozman of another trip she took last spring with HAA 257n. “It’s much more of an immersion into what you’re studying. The conversations about art don’t end at the time that the museum closes. We’ll be out for dinner and we’ll still be talking about the art.”

According to Hamburger, this immersion allows students to fully engage with the material that they encounter while traveling.

“When students go, they have to have some kind of context to understand what they are being confronted with,” he explains. “Even better is when students have to actively participate and prepare in advance a presentation about the object we are seeing.”

Indeed, this opportunity to travel is so great that students in the concentration are more than happy to do the extra work required to fully experience their excursion.

For now, these excursions are almost exclusively limited to the HAA department. The Freshman Seminar program also offers occasional trips—past destinations have included Japan and the Galapagos Islands—but, like the seminar options, the availability and subject matter changes every year. Likewise, several courses across other departments offer short trips to locations in the Northeast, but there is an evident disparity between a drive to New Hampshire and a trip to the Mediterranean.

“I think [excursions] should be available for anyone studying a subject where it would be helpful to see specific sites,” Yohalem says. “I think HAA is a good candidate for that, but I think other concentrations would benefit from it equally well, and I think that they should have that opportunity.”

Considering that this sophomore excursion program in the HAA department has met with resounding approval, it seems only to be a matter of time before more students sign on for similar opportunities. Overall it seems that the drive to study abroad is gaining momentum—a marked change from the traditional belief that Harvard is the end-all and be-all of education, regardless if what you’re studying happens to be in Cambridge or not.

“I think [Excursions is] a fabulous idea,” says Schlozman. “As sophomores, the students may not quite be as steeped in art history or know quite as many objects. It’ll become real to them in ways that it might not just through a standard classroom course.”

Hamburger agrees. “There’s nothing quite like it—at a certain point you just have to get students out of the classroom and into buildings,” he says. “I know several students who have come back from these trips and declared a major in Art History. These excursions can be life-changing experiences.”

And maybe these excursions in the HAA department will spur other departments, who can likewise gain from cultures abroad, into designing similar curriculums for their students. For now, though, History of Art and Architecture seems to be the concentration to choose.