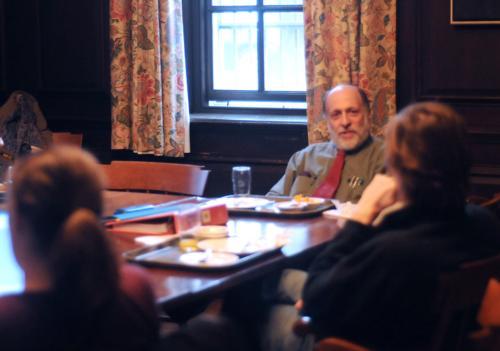 Author and civil rights attorney Harvey A. Silverglate met with pre-law students over dinner in Dunster last night to discuss his new book on the Justice Department.
By Lauren J. Vargas, Contributing Writer

Prominent civil rights attorney and Harvard Law School grad Harvey A. Silverglate hosted a dinner discussion in Dunster last night on free speech and student rights in the age of the war on terror, while emphasizing reform of Harvard’s Administrative Board.

Silverglate, an affiliate of Dunster’s Senior Common Room, touched on topics ranging from gossip blogs to protest art. An outspoken proponent of unlimited free speech rights, Silverglate fielded several questions from a small group of students on the recent calls for Ad Board reform that have come both from College administration and undergraduates.

“It is not exactly a democracy, so that sets the tone, but the Ad Board is completely outrageous. I foam at the mouth when I think about it,” Silverglate said.

In January, Interim Dean of the College David R. Pilbeam announced the names of faculty members of the College’s committee charged with examining the procedures of the Ad Board. But the committee’s chair, Organismic and Evolutionary Biology Professor Donald H. Pfister, has said the group is on a “little hiatus,” as one of its other two members has been on leave since the committee was formed.

Silverglate voiced his concern over how changing moods across the country, especially in relation to fears of terrorism, have influenced charges are brought against criminals, a major theme in the book he is currently writing. Silverglate cited an MIT student arrested for a fake Styrofoam bomb in Logan Airport and a professor accused of bioterror in protest art.

According to Silverglate, the war on terror atmosphere has permeated the bubble of college campuses, and he pointed to the Ad Board as an example of this trend. To the unanimous head-nodding of his listeners, Silverglate voiced strong opposition to the Ad Board, noting a major point of contention with its structure.

“Harvard is, if not unique...in a small class of schools that have no student representation on the Ad Board,” he said.

Pressed to elaborate, Silverglate outlined what he considers other flaws of the Ad Board, including its level of secrecy, nebulous rules, and “irrational” fact-finding tactics.

Matthew L. Sundquist ’09 and Randall S. Sarafa ’09, current Undergraduate Council president and vice president, made Ad Board reform a central focus of their campaign for the Council’s top spots in December. Last semester, the UC formed the Ad Hoc Ad Board Committee, which includes both UC representatives and other students, to seek a student voice in the reform process.

Silverglate also expressed disdain for the role of resident deans in the disciplinary process.

“Little do you know that everything you are telling your ‘friend,’ they are free to tell the Ad Board,” Silverglate said.

After the discussion, Piotr P. Szamel ’10, a member of the UC’s committee, said he found the talk helpful in understanding the primary challenges involved in Ad Board reform.

“The issue of having advisors [for students facing the Ad Board] is one that has come up and we have been dealing with,” Szamel said.

Jarret A. Zafran ’09, who attended the discussion and is writing a paper on one of Silverglate’s books, also said he found the talk engaging.

“I thought it was fantastic. It was interesting to hear where he was coming from,” Zafran said.

For more on the Ad Board, please see "Tough Love."