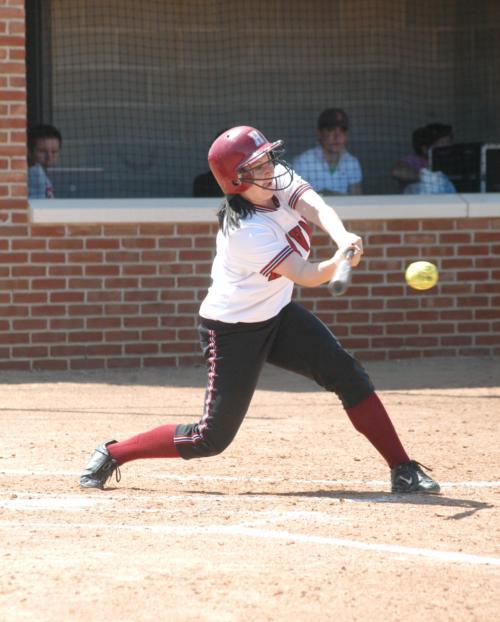 Sophomore slugger Lauren Murphy posted a three-hit, four-RBI performance in the 10-2 win over St. Peter’s in the Crimson’s home opener last Wednesday after going 3-for-4 in Harvard’s 6-5 loss to Georgia the previous Monday. The Crimson went 6-5 in its spr
By Kara T. Kelley and Julia R. Senior, Crimson Staff Writerss

Kicking off spring break in the warm weather is what most college students dream of. For the Harvard softball squad, playing six games in four days in Georgia is hardly a vacation, but it is the next best thing. The Crimson finished second in the Mercer Easter Classic, and junior Bailey Vertovez earned Ivy Player of the Week honors for her efforts. Vertovez went 7-for-12 at the plate, played an error-free three games at shortstop, and was the starting pitcher against Mercer, giving up just two runs in four innings.

After a few sunny days on the road, the Crimson returned home to earn three victories at Soldiers Field. The busy week of games should have Harvard playing at its best as the Crimson now turns its attention to Ivy League play.

“We’re ready to go,” Harvard coach Jenny Allard said. “I think we’re starting to get into a rhythm so it’s nice to start conference [play] with some confidence under our belts...It’s been a lot of games of spring break week, but that’s typical and we feel ready to start conference.”

The Crimson swept Maine last Thursday in its final two games before Ivy play began. In the second outing of the day, Harvard used a massive third inning to propel itself over the Brown Bears.

Freshman Ellen Macadam was hit by a pitch and then stole second to start things off in the third. Next, Vertovez took a free pass to first and sophomore Lauren Murphy reached safely on an infield error that loaded the bases. A wild pitch brought Macadam across the plate, the first of seven runs in the inning.

The scoring continued until 14 batters had come to the plate. Although Harvard helped itself with four hits in the inning, the Brown Bears gave the Crimson a hand by committing two errors, hitting two batters, and walking another.

After going down 2-0 in the first inning, Harvard pulled itself together and rallied past Maine, 4-3. Down 3-2 in the sixth sophomores Melissa Schellberg and Stephanie Krysiak each knocked a single up the middle to set up a two-out at bat for Macadam.

Macadam came through for the Crimson with a hard double to left center that brought in Schellberg and Krysiak—the tying and winning runs, respectively.

Harvard enjoyed a 1-2-3 top of the seventh and walked away with the victory. Captain Shelly Madick worked four innings in the circle, giving up two runs on two hits. Sophomore Margaux Black came in to relieve Madick and held the Brown Bears to one run over the final three innings.

After starting the year with 16 road games, the Crimson finally returned to Cambridge, where it cruised past Saint Peter’s in its first game at Soldiers Field. The hosts got on top early—taking a commanding 5-1 lead in the bottom of the first, and never looked back.

Murphy led the way at the plate for the Crimson with three hits and four RBI, while sophomore Jen Francis and senior Danielle Kerper added two hits each.

Black came in to relieve sophomore Dana Roberts in the top of the third and pitched a scoreless and hitless final four innings. Starting pitcher Roberts worked two innings. Despite giving up six hits, Roberts held the Peahens to two runs.

After blowing the Crimson out in the morning, Georgia State (24-6) rallied in the bottom of the seventh to squeak past Harvard 6-5 in the afternoon.

The Crimson took a comfortable, 5-1 lead in the fifth before the Panther bats got going. Georgia State rallied for three runs in the bottom half of the fifth to pull within one. The Panthers pulled even in the seventh and then loaded the bases before sophomore Danielle Roddy hit a deep shot to left that drove in the winning run.

“Lauren Murphy has been coming on strong at the plate,” Allard said. “She has injuries to her hip, and she’s settling in a little bit more offensively.”

The earlier matchup with Georgia State lacked the drama of the afternoon edition, as the Panthers eased past the Crimson, 10-2. For Harvard the trouble began in the first inning. Starting pitcher, Vertovez walked the first Georgia State batter she faced. A stolen base followed by a passed ball and a double brought the leadoff hitter across the plate. The third Panther to come to the plate hit a two run blast that put Georgia State up 3-0.

The outing did not improve greatly for the Crimson after that. It took four Crimson pitchers—Vertovez, Black, freshman Alex Torres, and senior Amanda Watkins—to get through the game. Torres was the lone Crimson pitcher not to give up any runs.

“We were trying to mix up the pitching. Right now, the walks are hurting us,” Allard said. “Walks are errors and we’re putting too many people on base, giving too many passes, so we’re trying to limit that.”

The bright spot of the outing was a second-inning blast from Murphy that cleared the left field wall. It was Murphy’s first of two deep balls on the day.

The Crimson’s only loss of the Mercer Easter Classic came in its fourth and final game—the championship game. The host squad earned a shutout victory in an eight-inning affair.

Despite Harvard’s lively offense throughout the weekend, its plate performance struggled in the final game. Without a single hit, the Crimson’s only base-runners reached on an error, a walk, a fielder’s choice, and by way of the tie-breaking procedure.

With Roberts and Madick splitting time on the mound, the Bears (25-14) earned only two hits. Two walks and a single scored the first extra-inning run. The second came from an RBI walk. Madick rebounded, striking out the next two batters. In the bottom of the eighth, Harvard went down in order with a flyout and two strikeouts.

To open the doubleheader against Mercer, Harvard’s errorless defensive effort triumphed over the opposing offense, leaving a total of 15 Bears runners on base.

In a back and fourth game, the Crimson broke a 2-2 tie in the final frame as junior Hayley Bock singled up the middle, driving in what turned out to be the winning run. Bock’s hit scored Macadam, who singled and stole second to place herself in position to put Harvard ahead.

Mercer scored first when a double came around off back-to-back sacrifice bunts in the second. The Bears tallied again in the fourth, but the Crimson knocked in two with an RBI single by Vertovez and a Francis sacrifice fly to right.

In the second game of the tournament, Harvard kept the upper hand throughout the contest, never trailing Birmingham Southern (21-14). Madick threw a full seven innings, striking out 10. Although the Panthers rallied within one run in the final frame, their comeback was cut short with a bases-loaded, two-out strikeout.

Scoreless through the first two innings, the teams exchanged runs in the third, each putting up three. The Crimson quickly answered with a solo shot by Murphy and an RBI double by Vertovez to propel Harvard ahead 5-3, a lead it would not surrender. The Crimson scored twice more on an RBI Murphy single and long ball by Francis. The insurance runs proved key in what ended up being a close game.

Opening the Mercer Classic and the spring break series, Harvard started off strong with a heavily lopsided win in its favor. A quick four and half innings saw Crimson bats swinging, tallying 20 hits.

With the score knotted at two entering the third inning, Harvard drove in eight and rallied again in the fourth, adding seven runs. Freshman Caitlin Bowers knocked two out of the park for her first two homeruns of her Crimson career. Bock drove in four while Pledger went 4-for-4.

Both back in action after off-season injuries, Roberts earned the win and Watkins came up strong in relief. Combined, the two gave up only four hits and struck out five.

—Staff writer Julia R. Senior can be reached at jrsenior@fas.harvard.edu.