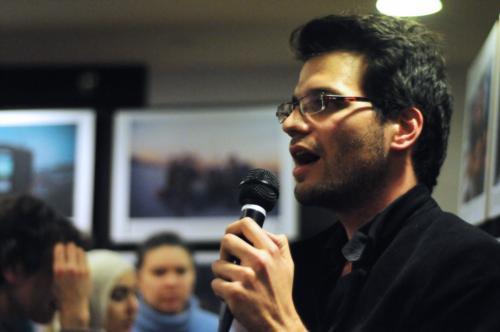 Nearly 200 visitors passed through the “Breaking the Silence” exhibit at the Harvard Hillel on Saturday. The exhibit displays controversial images and video testimony of Israeli soldiers who served in the occupied Palestinian territories.
By Bita M. Assad, Contributing Writer

Seven months after volunteering in community education in Israel, Dotan Greenvald says he found himself “pointing guns in the neighborhoods of the same kids I had educated a few months ago.”

Before Greenvald began conducting field research and giving speaking tours for “Breaking the Silence”—a traveling exhibit of over 100 photographs and video testimonials—he served in the Israeli Defense Force (IDF) for two years.

“The first time you point your gun at a child, you immediately lower the gun and think, ‘What the hell is going on?’ The second time you just lower your gun. The third, seventh, and 17th time it happens, it becomes normal,” he says. “This is how things that you thought were absurd become normal.”

The exhibit, which opened last Saturday at Harvard Hillel and is sponsored and hosted by the Harvard College Progressive Jewish Alliance (PJA), portrays the daily life of Israeli soldiers who served in the occupied Palestinian territories.

On Saturday, a crowd of nearly 200 moved from table to table, viewing each collection of photographs portraying a different facet of Israeli military life.

With the exhibit running over the next two weeks, contention has risen not betweem Israelis and Palestinians, but within Harvard’s Jewish community itself.

The exhibit, which originally opened in Israel in June 2004, has created debate because of its provocative subject matter, as former Israeli soldiers “break the silence” and voice their reflections on their military experiences.

One photograph, for example, features Israeli soldiers with the corpses of Palestinian militants after they had been killed by the IDF. The accompanying description explains that the photographs are self-documented “victory souvenirs” of the soldier’s military service.

According to the exhibit’s Web site, the photographs are merely intended to show soldiers’ experiences and not to espouse political ideology.

The discussion surrounding the exhibit not only sheds light on the full spectrum of military service in the occupied territories, but hints at the underlying dialogue facing the Israeli civilian population.

“There’s a link missing in the chain. People are making decisions, people are voting, they are talking about the situation but they don’t know what’s going on,” says Greenvald, one of two tour guides for the exhibit at Hillel. “We give a different perspective. You can see it through the photos.

“Sometimes this line is not aligned with the civilian perspective. I am doing it because this line has changed,” says Greenvald of the motivation behind his involvement in the exhibit. “The line had to change,” he adds.

Greenvald’s testimony stands in contrast to Asher A. Fredman’s ’08 reflections on his military service.

Fredman, a Harvard student who took a year-long leave of absence to serve in the Israeli military voluntarily, offers a different perspective of military life in the occupied territories.

The experience of protecting family and friends was a rewarding one, he says.

“There is the potential for moments of both moral lapses and great pride,” Fredman says.

Both Greenvald and Fredman highlight the tension between security and an ethical code of conduct in the complex challenges they faced.

For Nitzan Shilon, a former officer in the Israeli and a second-year student at Harvard Law School, the competing claims between securing oneself as a soldier and conducting oneself in accordance with the Israeli military code of conduct led to inevitable conflict.

“Whatever you do, you will do the wrong thing,” he says.

While some say that the exhibit is important because it exposes the reality of life as an Israeli occupier, Harvard Students for Israel President Jacob M. Victor ’09 says that the photographs are “controversial” and “ambiguous.”

“The community is internally uncomfortable with it,” says Victor, who is also a Crimson editorial editor. “The community is also concerned that the outside message will confirm the incorrect, biased view of Israel that many people have.”

Victor says that while the aims of the exhibit were noble, the exhibit itself only “serves the purpose of further demonizing Israel in the eyes of many students on campus.”

Fredman also says that the exhibit is “sensationalized” and fails to “reflect both the difficulty and necessity of what the IDF has to do.”

However, leaders of the PJA, a member organization of Harvard Hillel, say they believe that Israeli soldiers bring expertise to the specific issues of the territories.

“They are the only people who can speak to the experience of soldiers serving, an experience not at all familiar to American Jews,” says former PJA co-chair Seth R. Flaxman ’08.

Among members of the Jewish community, the concerns surrounding the exhibit have also raised the question of whether Israelis themselves should be publicly criticizing Israel from within the United States.

“I personally believe that these types of debate are understood very differently when they are outside of Israel,” says Shilon, who served in the Israeli army for four years.

While “Breaking the Silence” has exposed disagreements within the College’s Jewish community, some say that this dialogue is necessary.

“Being progressive means being open to debate and willing to criticize the Israeli government,” says Flaxman of the PJA’s decision to sponsor the exhibit at Harvard.

Although the explicit support of Harvard Hillel is noticeably missing from the list of sponsors, the decision to move the exhibit from CGIS-South to the second floor of Hillel revealed a point of agreement for the Harvard PJA and the broader Hillel community.

In explaining the decision to hold the event at Hillel, Hillel President Sarah B. Joselow ’10, who is also a Crimson design editor, says that holding the exhibit at Hillel will facilitate discussion.

“We thought it was important that it be contextualized in a Jewish setting,” she says.

Despite the decision to hold the exhibit at Hillel, some members say they are fundamentally opposed to the message and the aims of the exhibit.

But Greenvald says that the exhibit raises awareness about conditions of military experience.

“I want them to understand that if you put someone in a violent position, they will become violent,” says Greenvald. “It’s the bully, it’s the geek, it’s you and me. This is what it means to be an occupier.”